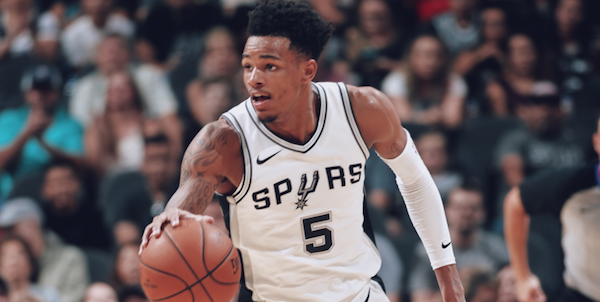 In what was a long time coming the Draftstars ‘Big 400’ target finally went off! The prize pool built up to a massive 157k, which 21 entries were lucky enough to share.

There’s another huge 9-game slate of NBA action on this Thursday for us to look forward to, which means there are hundreds of players to choose from for your daily fantasy teams! We’re here to help you with picking some of the lesser-known cheaper players to give your team the edge and a chance to take home some cash. Moneyball and Draftstars are again offering massive cash prizes for their major tournaments, so be sure not to miss out!

See our fantasy tips for Thursday, the 25th of January below.

Last week, Dejounte Murray was named by Coach Popovich as the Spurs starting Point Guard going forward. He responded with a career high in points and looked as confident as ever. He is guaranteed to get minutes on Thursday and is still extremely cheap at $4,800 in Moneyball and $8,200 in Draftstars.

Our cheap option at the 2-guard is the Mav’s Wes Matthews. The Mavericks are coming up against the Rockets, who play with the fastest pace in the league and love to shoot the three-ball. Matthews Is a handy shooter from deep and should benefit from the pace and style of the game. He’s just $5,200 in Moneyball and $9,350 in Draftstars and should score well above his price tag.

Bjelica is our pick of the day at the Small Forward position. He is nearly basement price at just $3,600 in Moneyball and $7,100 in Draftstars. He has benefitted greatly in the last 2 games after being injected into the starting line-up, highlighted by his 18-point 9-rebound game in his latest outing. If he’s listed in the starting 5 again, make sure you have him!

The Clippers have been plagued by injuries this season, especially at the forward spots, which has given Harrell an opportunity to impress and he hasn’t disappointed. He has been in hot form lately, averaging 29.1 fantasy points across his last 3 games and is getting extended minutes. He’s priced at $5,200 in Moneyball and $8,200 in Draftstars and is a real bargain.

Rounding out our cheap fantasy line-up at the Centre spot is Portland’s Jusuf Nurkic. Nurkic has finally started to find the form that he showed at the end of last season and is averaging a huge 38 fantasy points across his last 3 games. The Trail Blazers are coming up against the Timberwolves, who boast one of the league’s best big men in KAT, which will force the Blazers to give Nurkic extended minutes. We recommend throwing him in your team at his cheap price of $6,700 in Moneyball and $12,150 in Draftstars.