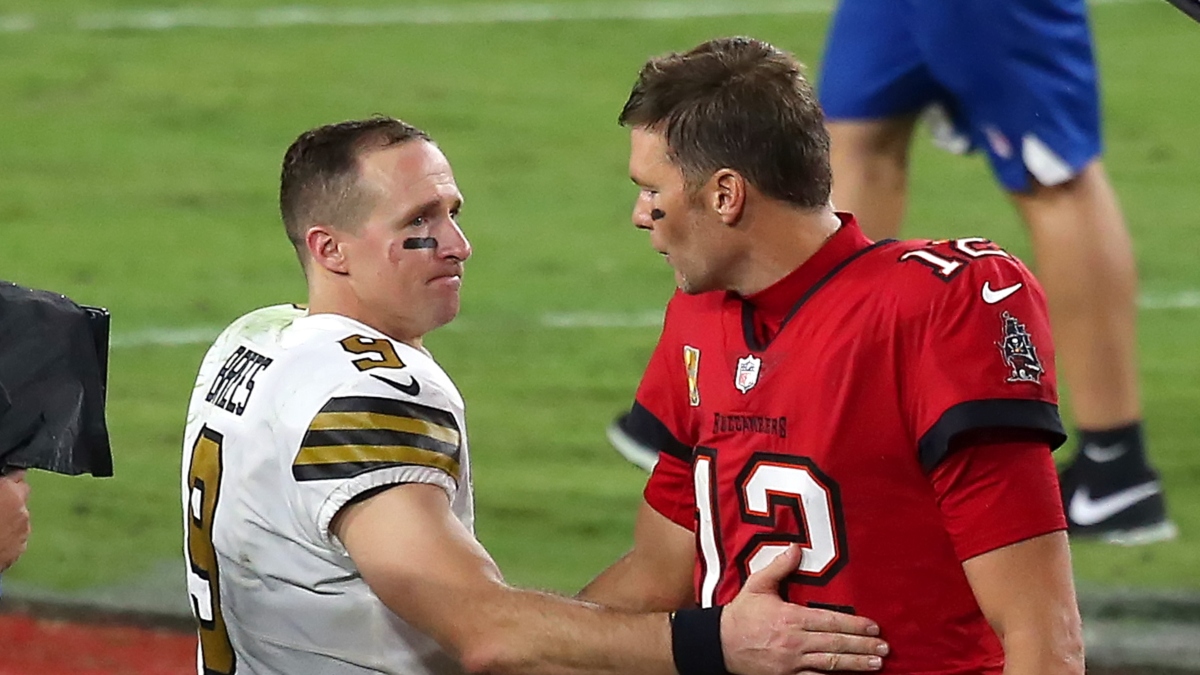 Draftstars has come through with the goods for Divisional Round, offering up a $10,000 combined slate for both days, as well as a $5,000 slate for each individual day. These are plays for the overall slate, but as the pricing is the same they also apply to the smaller slates. 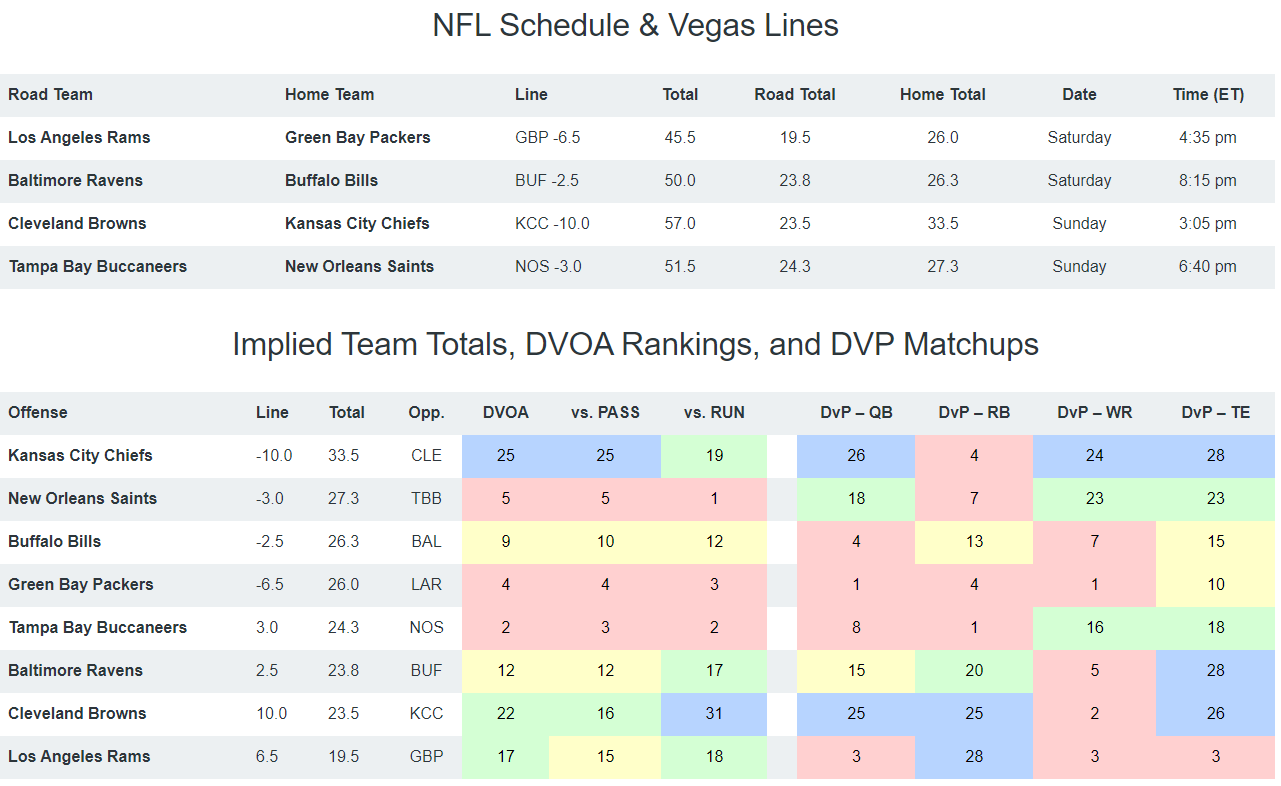 Lamar Jackson: The Bills are humming, and the Ravens haven’t been too bad either. The game is projected for 50 points, which is more promising than the Rams v Packers game on Sunday. Jackson hasn’t gone below 20 points for 6 weeks, but also hasn’t hit 30+ for the last 3. My translation is that he’s going well and is due for another big game. The Bills are susceptible to the run game especially, which we know is Lamar’s biggest strength. If the Ravens can do some damage on the ground, they should also be able to open up opportunities in the passing game.

Tom Brady: Like Jackson, Brady has finished the season strong. A big part of that is the excellent receiving group he has to throw it to, which always makes for a good stack. The Saints are a stout defense, but if anything, that will limit the run game and force the Bucs to pass even more.

Baker Mayfield: Unlike the previous two, Baker has been pretty ordinary this season in fantasy terms. That has more to do with his team relying on it’s strong running game than the quality of his play. Injuries/availability of his wide receivers has also been a big issue. Other than Odell Beckham the Browns now have everyone back on board, and they’ll have to find a way to keep up with the high-powered Chiefs offense. It could be through the Chubb/Hunt combo, or it could be more focused on the passing game. His price and low ownership could make that risk worth taking.

Cam Akers: Akers was very good last week in leading the upset victory over the Seahawks. The rookie can play, and he’s got the workhorse role locked in with Darrell Henderson out. The Packers aren’t great at stopping the run, and his price is still reasonably low, so it’s all green lights for the Akers play again this week.

Devin Singletary: A similar play to Akers last week, Singletary should have the opportunity to be a workhorse back after rookie Zack Moss went down with injury last week. His season has not been good but getting all the opportunity against a beatable Ravens run defence should allow him to get back to the promise of his rookie campaign last season.

Kareem Hunt: If you’re not convinced by Singletary, I think Hunt is a good play also. The likely chasing game script would suit his skills in the passing game, although it’s worth noting he’s only had one target in each of the last two weeks, while Nick Chubb saw 4 targets last week. Despite that I’ll keep faith in his season long trend of 3+ targets per game, with a ceiling of 7 while chasing the Ravens in week 14.

Tyreek Hill: Regardless of how this game pans out, the Chiefs passing game is going to score some points. I’m going to struggle to pay the asking price for Travis Kelce or Pat Mahomes, so it’s the WR that I’m most interested in. It’s been over a month since Hill put up a monster 58 point showing, but anything over 25 could be enough on a small slate this.

Antonio Brown: 84 fantasy points in the last 4 weeks and still the cheapest of the Bucs WRs? To be fair, both Evans and Godwin are around the 80 point mark in that period also, but both are a little banged up. Brown is slowly getting back to something resembling his former self (nowhere near his ceiling of course), and I like the chances that the Bucs have to throw the ball plenty in this game against a good Saints offense and a stout run defense.

Stefon Diggs: It’s very hard to ignore Diggs regardless of matchup. He’s on fire, and so is Josh Allen, and together they are almost unstoppable. He’ll get plenty of opportunity to put up some big points, the only difficulty is fitting him into a line-up with other expensive plays such as Hill or Jackson. I don’t see many minimum priced plays that will make this viable, so it will likely come down to choosing one or the other.

Mark Andrews: I’ve been touting him for a while, and he’s had a bad case of the dropsies in recent weeks. Usually this is the one player I trust Jackson to throw the ball too, especially in the end zone. Hopefully he’ll find some confidence in his hands this week and finally pay off some for the great opportunities that have been coming his way. The alternative is to pay an exorbitant price for Travis Kelce at high ownership, which doesn’t seem like the right way to win this slate from my perspective.

Austin Hooper: Perhaps an easier play to have faith in than Andrews, Hooper has been a central figure in the Browns passing game over the last month. Usually that comes with a limited ceiling as the Browns run the ball over and over, but as I said with Mayfield I expect they’ll be forced to throw it a lot more this week. Other than Jarvis Landry, Hooper is the most likely beneficiary of that kind of game script, and he has the potential to finally put up 20+ points as a Brown.

LA Rams: Choosing a defense is a horrible proposition in the playoffs, as these are all good offenses. I’m taking the Rams partly because they’ve looked like a very intimidating unit of late, and partly because I don’t really want to play any Packers players. 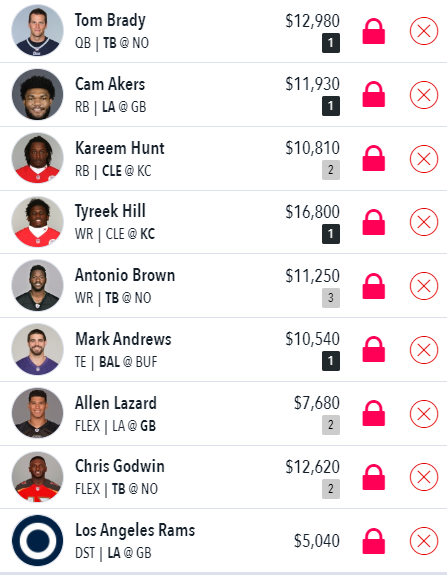