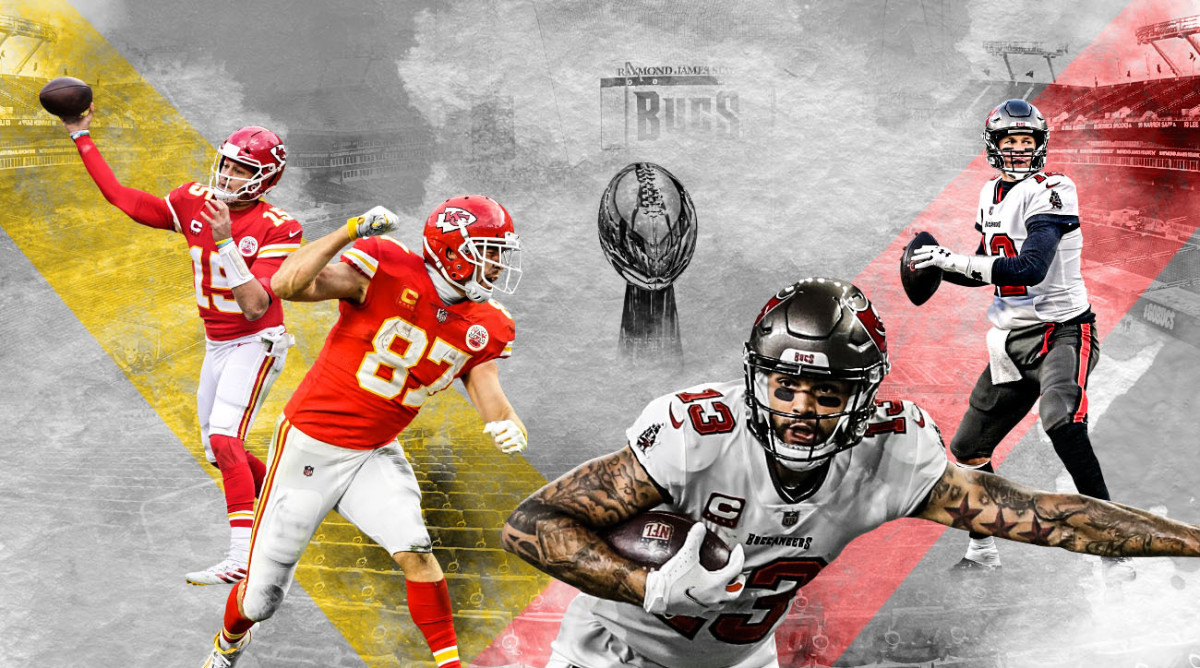 Are we ready for the biggest game of the year, perhaps in any sport? The stage is set as Patrick Mahomes attempts to take his Chiefs to back-to-back titles, and in the process take over the long-time mantle of best player in the NFL from Tom Brady. Brady himself is looking to seal a pretty remarkable storyline after changing teams for the first time in his career and marching to his 10th(!) Super Bowl at an age when most players are long retired. And of course, there are around 100 other players on the field also looking for the ultimate success.

There is a $20,000 contest to target on Draftstars, and a range of massive pools on Draftkings including the Millionaire Maker.

Currently clear with only a 10% chance of rain. Ideal conditions in Tampa.

How to Watch the Game

In Australia you can watch the big game either on Channel 7 or 7mate depending on your location or through ESPN (though CBS are taking the commentary) either on Foxtel or Kayo. Game kicks off at 10.30am AEDT

As with all single game contests you have three options in Australia to play DFS. If you have not played before you can read our how to page here. The largest DFS site is DraftKings which headlines with a $5,550,000 Super Bowl Millionaire for a $10USD entry fee. On DraftKings you will need to pick 6 players under a $50,000 salary cap and have a captain that scores 1.5x the fantasy score. On Draftstars who are hosting a $20,000 contest for a $15AUD entry fee, you will need to pick 6 players under the $100,000 salary cap. There is no multiply option on Draftstars.

Pat Mahomes: The best player in the NFL is always going to be incredibly popular regardless of price. Along with Brady and Hill I expect him to be almost 100% owned on Draftstars, where Kelce eclipses them all for price. On DraftKings, Mahomes is the top salary and there could be a little more merit in looking elsewhere. I’m sure the Buccaneers will have plans to try to slow him down, but that is much easier said than done, so it would be a terrifying fade.

Tom Brady: No matter how you look at it, it’s been a remarkable season from the 43-year-old GOAT. In 19 games he’s exceeded 20 FP 12 times including 30+ 5 times. He’s averaged 25 in his last 6, all victories where the Bucs scored 30+ points. Things should be tougher as underdogs in this game, but that should only mean more need to throw the ball and rack up fantasy points. Brady just looks like a solid play on both sites.

Tyreek Hill: Hill might have the biggest ceiling of anyone on the slate, with a massive 61 points against the Bucs earlier this season and several other 30+ outings. He’s almost impossible to cover on his day so he’s another chalky option that I’m happy to play on both sites and look to be different elsewhere.

Travis Kelce: Kelce is the Chiefs volume machine, with 10+ targets and 20+ points in 9 of his last 10 games. He’s also scored a TD in 8 of those games! Mahomes is looking to throw him the ball in every situation, making him the safest floor play on this slate. The one qualifier is that as the most expensive option on Draftstars, it is perhaps feasible to save some salary to avoid having to find a viable play at the very bottom of the salaries.

Rób Gronkowski: Gronk has not been good lately, seeing less volume as the season goes on and being used in more of a blocking role. Having said that he has showed 20 point upside on a number of occasions, including a big game against the Chiefs. He’s very cheap on both sites and I feel good about the chances of Brady looking for his long-time buddy in the end zone in such a high pressure game.

Scotty Miller: This play depends a little on the fitness of Antonio Brown, who has been battling a knee injury and looks likely to play. If Brown is out or limited, Miller should see some extra opportunities. We’ve seen him go off a couple of times earlier in the season, and he’s cheap enough on Draftstars in particular to only need one big play to make it to the winning lineup.

Tyler Johnson: Another cheap Bucs receiver, Johnson is an absolute punt that relies on Brown being limited. He costs basically nothing on both sites, but that’s because he generally only sees one target per game. He’ll need to score a touchdown on that one opportunity to be worthwhile, something that he’s only managed twice this season. The ultimate risk/reward play that can allow you to fit in all of the expensive chalk and should be virtually unowned.

Ronald Jones: At $2200 on DraftKings, RoJo is less than half of his previous lowest salary this season ($5200). The reason for that is Leonard Fournette has gradually taken over the starting role more and more as the season has progressed, with Jones now limited to around 12 rushes and no passing game work at all. The reason I remain interested is that part of his decline has been a nagging thigh injury, which may be behind him now. At such a low salary and probably similarly low ownership, all it would take is one big play and perhaps a short TD run for him to get you ahead of the field. He may even be a wild captaincy option on DraftKings.

Clyde Edwards-Helaire: CEH made his return from injury last game, and did score a TD, but saw very little volume with only 7 runs and one reception. Darrell Williams saw 13 runs and a catch, and is cheaper than CEH on DraftKings. If you’re playing Helaire I’d only consider it on Draftstars where he’s the cheaper option, but I do expect the Chiefs to lean on the more experienced Williams in important situations.

Antonio Brown: This is pretty simple. I don’t trust Browns knee at all, and even if declared fit I expect him to be limited. With teammates Mike Evans and Chris Godwin only a little more expensive on DraftKings, I’ll definitely avoid him. If you want to play him it’s more viable on Draftstars where he’s half the price of his teammates. 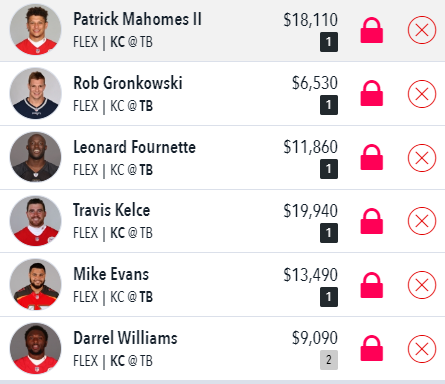 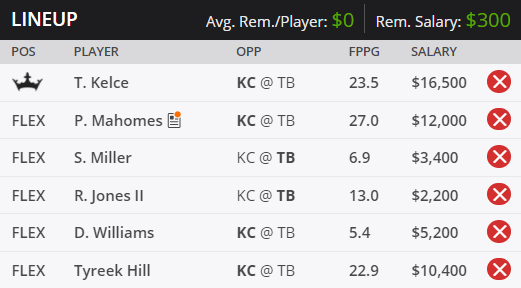