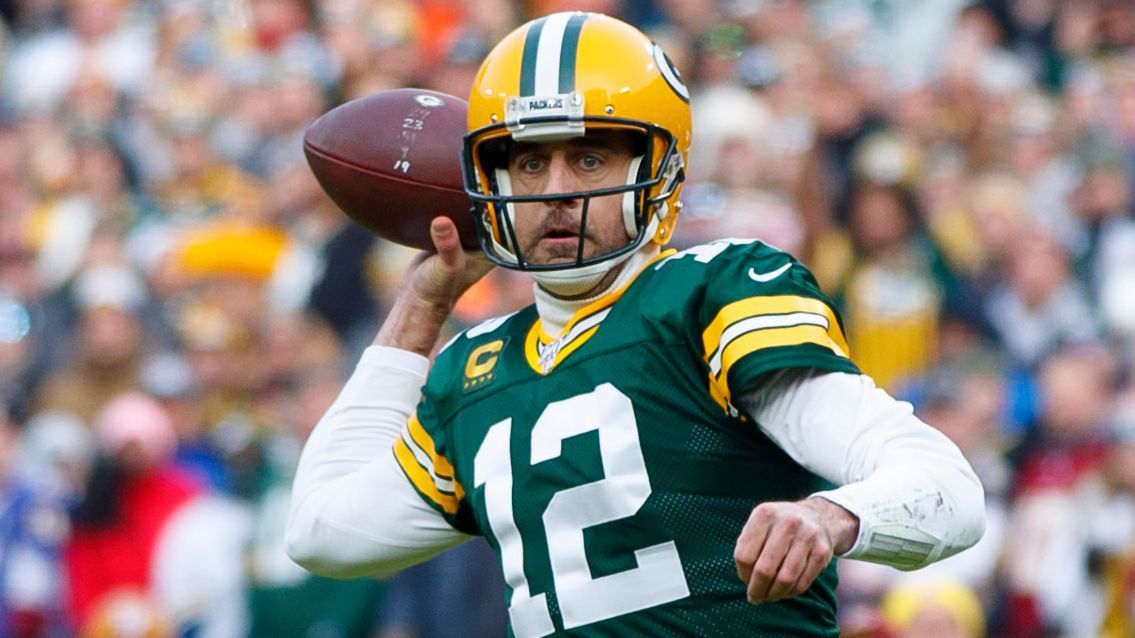 There is a massive 13 games on the main slate this week. I’ve highlighted a couple of the more obvious stacks from teams that are big favourites in high total games, and a few more unique plays when looking for a little value.

Also have you seen the snake drafts on DraftKings? You can now join a snake draft for single slates and compete in Sunday contests! Check it out! 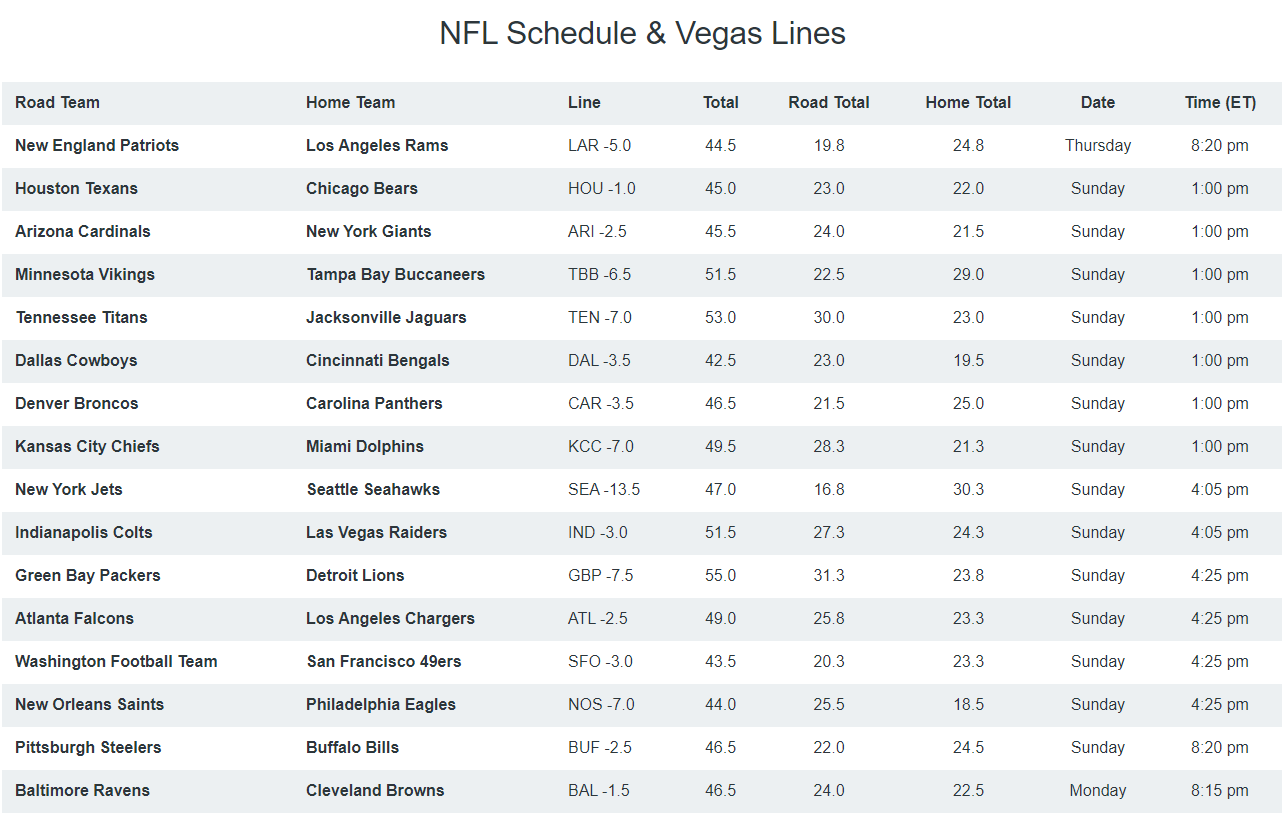 Aaron Rodgers: Rodgers has gone 7 straight weeks with 22+ fantasy points, and it seems that he is making a concerted effort to throw the ball in the Redzone rather than giving it to his RBs to run it in. Could it be that he wants to pad those stats to boost his MVP chances? If so, the Lions aren’t the type of opposition that can slow him down. I expect he’ll be one of the highest owned QBs, but I want to play him anyway. At least the stack is less expensive than an equally appealing Seattle stack of Wilson/Metcalf/Lockett.

Ryan Tannehill: The Titans may have lost to the Browns last week, but they’ve had no trouble scoring points with a combined 80 points in the last two weeks. The Jaguars are not a team to slow down that momentum, so I want a piece of the Titans in most lineups this week. Tannehill is good and has a number of weapons that I’ll mention down below. The danger is that the Jaguars can’t keep up and the Titans can stop throwing the ball later in the game, hence my Derrick Henry alternative in the RB section.

Mitch Trubisky: I wanted someone near the bottom of the salaries, and I’ve settled on Trubisky thanks to an easier matchup in the Texans, and some decent receiving options to throw it to. Yeah, he’s not great at throwing the football, but even he has a good day out once or twice a season and should be very low owned. This one is for the risk-takers, a strong GPP play if you can accept the fact he’ll likely fail.

Derrick Henry: It’s Derr-ember, the time when Derrick takes advantage of the cold weather to pound the ball up the middle all day long. Okay, that didn’t work out very well last week with a paltry 6 points, but it serves me right for touting him after a ceiling score the week before. I’m happy to try again, as I highly doubt the Jaguars jump out to a big lead like the Browns did last week. The Jags are one of the easier RB matchups in the NFL, so I’ll trust the Titans to get an early lead and let Derrick go to work all day long. I don’t recommend playing both Derrick and the other Titans I’ve recommended (Tannehill, Brown, Jonnu), as they don’t correlate particularly well. Someone like Mike Davis or Chris Carson might be a better choice for those lineups.

Giovani Bernard: I don’t feel great about either of these value RB plays, but it’s necessary to try to find something down here. The value in Bernard is that he is the main RB for his team, and he’s playing with a fill-in QB who may dump-off plenty of cheap passes to him. It helps that the Cowboys aren’t an overly scary opponent these days. Bernard showed us a ~20 point ceiling a couple for times earlier in the season, so cover your eyes and hope for the best!

Duke Johnson: This might be a little easier to stomach than Bernard, as Duke is perhaps slightly more talented and at least playing with a quality QB in Deshaun Watson. The Bears are no pushovers, but he’s cheap enough to ignore the matchup and hope for a single TD to get to value. An alternative cheap play that may be much lower owned than either of these value RBs is Peyton Barber, who should get the goal line work with Antonio Gibson out. Washington is going pretty well, 49ers are going pretty bad, it might not be the worst play.

Allen Robinson: There are some concerns here as Robinson has consistently indicated on Twitter this season that he wants out of Chicago. Despite that he seems to have some decent chemistry with Trubisky and is still his stud receiver self. The Texans don’t have anyone that can handle him at his best, so I’m comfortable with this play. Anthony Miller and Cole Kmet are both interesting value plays if you want to double stack the Bears.

Davante Adams/Allen Lazard: It’s hard to fit the Green Bay stack in, because Adams is the most expensive play on the slate. Hopefully that is enough to drive down his ownership and reward those that can find enough value elsewhere to fit him in. The Lions don’t have anyone that can slow anyone on the Packers down, so I’m happy to stack Rodgers and Adams with either of Lazard/Tonyan and hope that the team never takes its foot off the gas.

AJ Brown/Corey Davis: I didn’t expect to say this, but Corey Davis has been pretty good this year, which means he and Brown are both legitimate options in a Titans stack. Davis had a massive day last week, so I prefer to go to AJ Brown who usually has the bigger ceiling for the two, and who should be a massive handful for the Jaguars secondary.

Curtis Samuel: This is a simple pricing mistake courtesy of COVID. With DJ Moore testing positive and his fellow WRs having to clear protocols, it looked like Samuel might not be available this week. He has now been reinstated to practise duties and appears the easiest value play on the slate. The matchup isn’t amazing, but with Moore likely out he should get enough volume to overcome any matchup concerns.

Jonnu Smith: Another Titans play to consider, Jonnu just looks like good value. The Jaguars are not great at covering TEs, and Jonnu has had a number of big games this season before missing last week with injury. In fact he scored 24 points with 2 TDs against the Jags back in week 2. It’s far from a sure thing, but I think you could do a lot worse than play Jonnu.

Robert Tonyan: I don’t know how this happened, but Tonyan has 8 TDs this season and has had 6 13+ scores, including the last 3 weeks in a row. As above, Rodgers loves to throw the ball this season, and spreads it around in the end zone, so Tonyan is as good of a play as anyone else on the team.

Rob Gronkowski: I couldn’t quite bring myself to include Tom Brady in the QB section, but I do want a piece to the Buccaneers offense in a nice matchup against the Vikings. All of the WRs could go great, but I love Gronks chances of having a big day in this one.

Seattle Seahawks: I find it hard to go past a strong team like the Hawks against the clearly tanking Jets. Confidence if very low in New York, and I’ll back Russ Wilson and his offense to play a little better than they have been lately and force the Jets to throw the ball for most of the game, creating plenty of chances for sacks and turnovers. If you need to save a little extra salary, I don’t mind the Arizona Cardinals against another struggling NY franchise in the Giants. 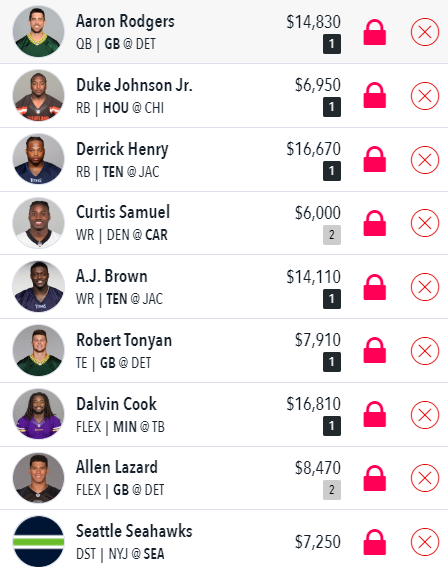