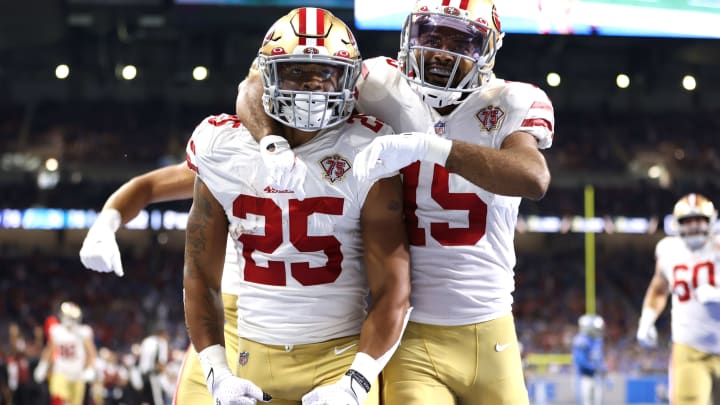 Week 10 of the NFL ends on Monday Night with the clash between the 3-5 San Francisco 49ers and the 7-2 Los Angeles Rams. It has been a whirlwind week at the Rams with the signing of Odell Beckham Jnr but losing Robert Woods to an ACL knee injury as well. Whereas the 49ers were blown away at home last week by a weakened Cardinals team. The game shapes up as the last chance for the home team to stay in touch for the playoffs.

Draftstars have a $6,000 contest up for grabs in the 6-man ‘Flex’ contest. As for Australian readers, we no longer have access to DraftKings. Moving forward, we are only focusing on Draftstars specific contests. Sad but that’s the cards we have been dealt.

49ers - WR Mohammad Sanu has been ruled out with a knee injury. RB Jamycal Hasty is also out with an ankle injury.

I am a little bit surprised that the 49ers are facing a smallish spread after having a rather forgetful game last week. But we can put this down to a rather healthy 49ers offense, especially for the receivers. The same can’t be said for the Rams with thier team favourite receiver gone for the season and a rather forlorn Beckham joining the team. Whether Beckham will see plenty of snaps is the million dollar question, but I would be rather shocked if he sees 40% of the snaps. Both teams' running attacks are ticking along quite nicely but it can't be said for the 49ers Quarterback. Jimmy Garoppolo was poor last week and coming up against a Rams defence that added Von Miller (who could be good to go) along with Aaron Donald, could spell a rough night at home. Interesting slate this one.

Seemed like a rough week against the Titans but Kupp still scored 20.5 Draftstars points on 11 receptions and 95 yards! Kupp leads the league in receiving yards and is a scary fade on this slate. Woods gone and a debut for Beckham will mean that Kupp will be relied on in the offence for the rest of the season.

All eyes are on Beckham at $200 cheaper so I am pivoting to the inherited number 2 receiver in Jefferson. Jefferson with Woods in the team had approx 15-17% of the target share but I am expecting that to rocket past 20% for the foreseeable future. Jefferson also played a season high 96% of the snaps last week with the Rams falling behind. Great value play.

With his rib injury now behind him and fellow running back Hasty out of the team due to injury, I am expecting Mitchell to take on a lot of work on Monday night. 64% of the snaps last week despite falling behind on the scoreboard and was targeted 5 times for a season high. The 49ers will want to negate the pass rush from the Rams and will look to get Mitchell involved on the ground. The price is too good to pass up here.

2 out of the past 3 weeks Henderson has scored under 10 fantasy points and is now starting to lose snaps to Sony Michel. Henderson touches have also decreased (only 60% of snaps in Week 9) but the 49ers have given up plenty of yards on the ground and this could be a get right spot for Darrell.

Can Sean McVay unlock Beckham’s deep ball potential off a signing midweek? Can Matt Stafford get on page with an erratic receiver who might be past it? I really don’t think so in this spot, and whilst the price is tempting, I have played OBJ too many times on Draftstars this year to have my heart ripped out again. No thanks. 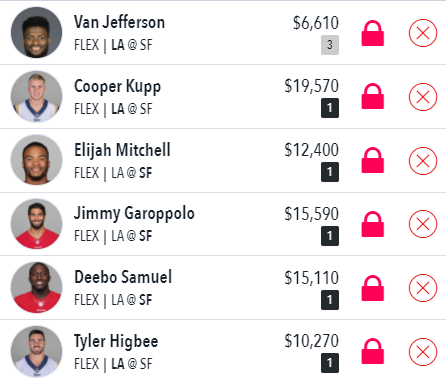