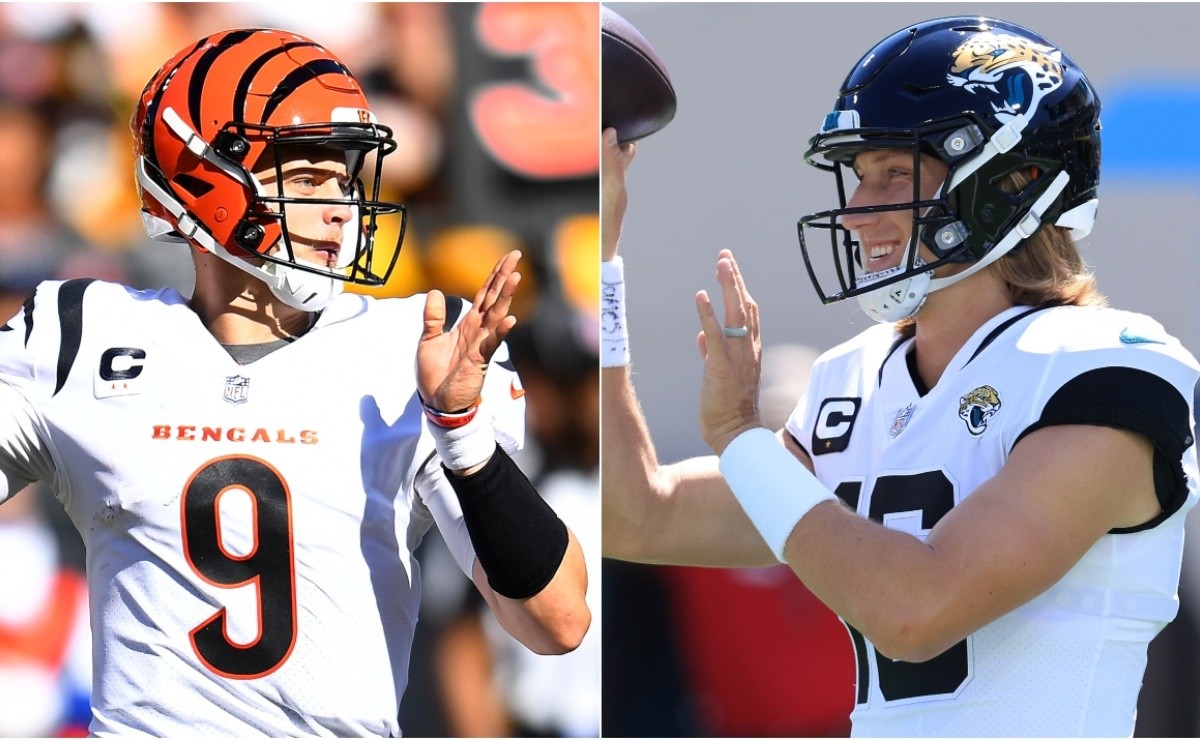 Week 4 of the NFL starts Thursday Night in the States with a flying Cincinnati Bengals (2-1) who are leading the AFC North hosting the Jacksonville Jaguars (0-3) who have struggled to a winless start of the season. It is the battle of the No.1 Draft Picks with Joe Burrow (2020) and Trevor Lawrence (2021) squaring up under prime time lights. The Bengals have impressed through 3 games, especially stuffing the Steelers in Pittsburgh in Week 3. For the Jaguars, optimism of a new star QB has diminished a little as Lawrence has struggled so far with 7 interceptions and 2 fumbles. The Bengals look good here to go 3-1. Let’s have a look at what we can do for daily fantasy.

Bengals - WR Tee Higgins is out with a shoulder injury for the second week in a row.

Jaguars - TE James O’Shaughnessy continues to be on injured reserve, so the Jaguars have acquired TE Dan Arnold from the Panthers.

The key to this matchup is the powerful offensive line for the Bengals. Last week against the Steelers, Joe Burrows was neither hit nor sacked in Week 3 and now faces a Jags defence that has struggled to get to the QB (bottom three in sacks in the league). If this goes to script then it could be a big night for Bengals attack whether it is through the air or on the ground. If the Jags were to struggle then Lawrence would use the passing game once again, but through 3 games, we haven’t seen a proper performance here. Bengals lineups are going to be chalky.

When your O Line is protecting your back and giving you time to average 8.5 yards per throw, then Burrow is going to produce through the air. Whilst he is not a dual-threat without a rush game, I don’t think that matters in this matchup. The Jags are going to struggle to get to Burrow. I wouldn’t go too crazy by rostering in the CPT position on DK but is more than acceptable in the FLEX spot.

The Rookie No.5 overall draft pick in the draft has had an insane start to his career with 4 TD’s and an average of 20 yards per reception. While regression is certainly due, the injury to Tee Higgins and his renewed chemistry with College teammate Burrow means he is well in play against the Jags. While Tyler Boyd may get more targets, Chase has the deep ball/TD upside here.

Leading targets, receptions and receiving yards for the Jags, the veteran Jones comes up against his former team and will look to continue his connection with Lawrence. Fellow receivers have struggled with Chark dropping balls and Shenault only working the underneath check-down route. If the Jags fall behind early then look for Jones to thrive late in this match.

With the acquisition of Dan Arnold during the week, you have to question if Arnold is going to be good to go for a full amount of snaps on a short week. Enter Hollister who played in the majority of snaps at Tight End for the Jags in Week 3 after the injury to O’Shaughnessy and was targeted 6 times. If the targets continue then Hollister is one of the better cheap plays. But confidence is literally 50/50 here.

Look, that field goal attempt from the Cardinals TD return from the Jags was pretty special but that has also boosted the average Jags D/ST fantasy score. Averaging 30 points against in three games and only 4 sacks, I expect a low score from a relatively “expensive” DST on Draftstars. 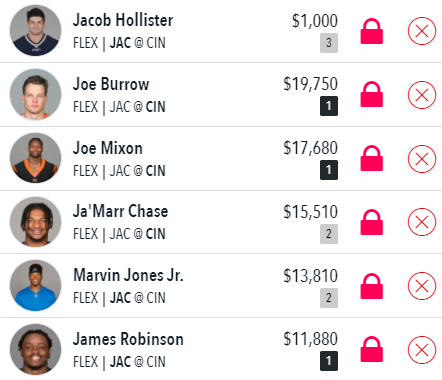 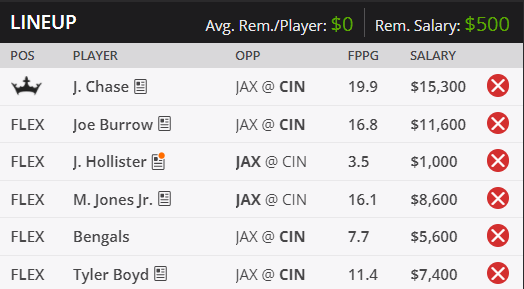