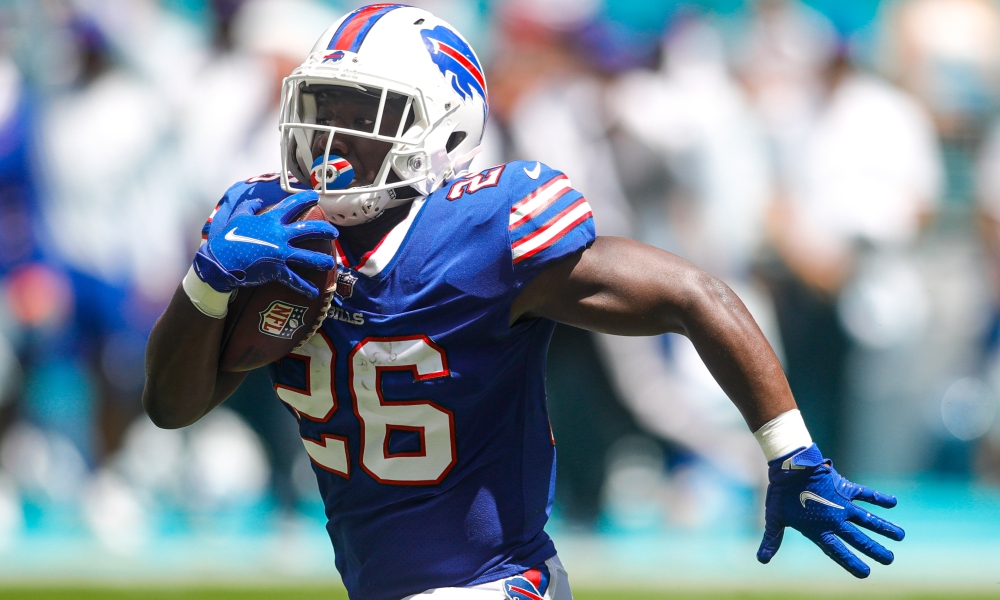 Week 13 of the NFL ends on Monday Night with the clash between the visiting New England Patriots who boast a 8-4 record travelling down to Buffalo to take on the 7-4 Bills. The Patriots have quietly put together an excellent season by winning their last 6 games with an average of 10 points against whilst the Bills are coming off a win on Thanksgiving down in New Orleans. This is shaping up to be a bit of a grind against two very good teams. Draftstars have a $6,000 contest up for grabs in the 6-man ‘Flex’ contest.

New England - RB Brandon Bolden was a limited participant in practice with a knee injury but is on track to play.

Bills - No injuries to report.

Those numbers above make for grim reading if you are expecting a high fantasy point game. Each defence just simply defends the long deep ball very well and makes you chip away via the run or by simply checking down for passing yards. However the Bills do have two class fantasy players in Josh Allen and Stefon Diggs who have big ceilings. Mac Jones has been very good in managing the Pats attack and has borne some fruit fantasy wise with 6 TD’s and only 1 Interception in his last three games. The supporting Pats attack however is non-fantasy friendly with a three-way Running Back committee and receivers who don’t score many TD’s. A single slate where a big play means cashing or not. One final note, the weather is not looking great. Forecast is cold, showery and very windy which is going to have a big impact on the passing game. We may need to find some running backs for this one.

Clearly by far the highest projected player on the slate, Allen will be affected by wind and the cold in the passing game, but his running game will certainly come into play with the books setting a 35.5 rushing line here. Allen has three rushing scores this season and has rushed for 50-plus yards three times. These conditions are not foreign to him playing at home and I expect him to manage the Bills across the park. Price tag is extreme but borderline essential.

Singletary has operated as the lead back in recent weeks, out snapping Matt Brieda last week 68% to 32%. Whilst Brieda found the endzone off a short pass from Allen, it won’t be a shock to see him used as an outlet in the short/quick passing game if the Bills need to attack on 3rd down. The price on Draftstars means we are ok if we can eek out 10+ fantasy points.

Love It - D/ST from either team.

With such a run heavy game prediction, low game total and fantastic defenses from either team, look to include one (not two) D/ST from your running back choice. Preference is for the Bills but if you believe the Pats can do some damage away from home then the away team at $5,360 is worth a stab at.

Harris leads the Pats’ ground game in touches and touchdowns this season, and he’s likely to be heavily relied upon, but the emergence of Rhamondre Stevenson and Brandon Bolden scooping up 3rd down work means his cheap salary could materialise to not a lot of fantasy points.

Yeah not sure if Jones is going to throw it at least 30 times if the conditions materialise here. The Bills are 1st in DVOA against the pass and the Pats receivers are not exactly deep ball threats to boost Jones’ fantasy output. But as you can see by his game log, Jones’ fantasy scores have been wild with some real duds and diamonds. But with no real ceiling player popping, Jones is going to find himself in plenty of sides from his QB play alone. 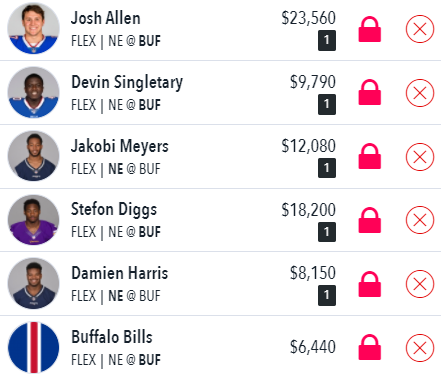