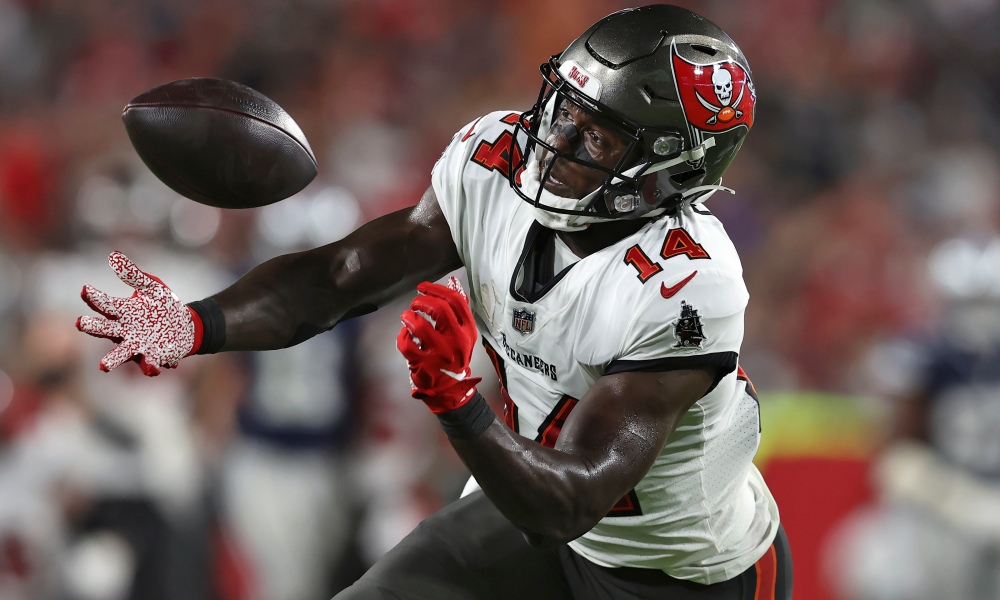 Week 11 of the NFL ends on Monday Night with the clash between the 6-3 Tampa Bay Buccaneers and the 3-6 New York Giants. Both teams are coming off their bye weeks which has meant some more rest and recovery for their stars. Draftstars have a $6,000 contest up for grabs in the 6-man ‘Flex’ contest.

Giants - RB Saquon Barkley is on track to play after suffering a bad ankle injury back in Week 5. Fellow RB Devontae Booker should be right to go after his hip injury has limited his practices.

Bucs - Concerns remain for TE Rob Gronkowski after practicing throughout the week but did not practice on Saturday with his back issue. So this needs to be monitored at final teams. WR Antonio Brown remains out.

While the Giants are relieved that Barkely is on track to play, the G-Men face a daunting Defensive line that has given up nothing against the run. News that Bucs Nose Tackle Vita Vee is set to miss might shake things up a little, especially if Barkley/Booker are targeted through the air. However the Bucs are big favourites at home and should be ready to fire for the backend of the season. Many see this as a danger game coming off the bye but Brady and co should take care of business here.

With Antonio Brown still out of the team, Godwin leads the Bucs with 77 targets (31 over his past three games) and is catching 74% of the passes that head his way. Nearly $2,000 cheaper than his fellow Wide Out in Mike Evans ($17,440), Godwin will appear in at least 65-70% of teams but has shown a massive ceiling if he gets rolling with Brady.

The much maligned Tight End is starting to get it going for the Giants with back to back to back 10+ fantasy performances and 2 TD’s. Engram has played in 80+% of snaps back in Week 9 despite fellow TE Kyle Rudolph receiving more targets. Engram’s salary is 2k more expensive than Rudolph which should keep his ownership low in this format.

While “playoff” Lenny is another level, “primetime” Lenny does need to be considered, especially with the Bucs likely to be playing with a lead. Fournette continues to produce and dominate volume in the Bucs backfield. He’s produced a 6 game average of 18.3 Draftstars points in his past six games and has handled over 30% of the Bucs’ touches this season. The Bucs are heavily favored, and if this game gets out of hand, Fournette will enjoy another full serving of work.

The Giants receiving core is starting to get healthy again with Golladay, Slayton and Engram all good to go. Even the thumb injury Toney had is reportedly been shaken off. Whilst I am not worried about the lack of work back in Week 9 (Jones only attempted 20 passes) it is the high price amongst his teammates that will make me think twice on Toney.

After a bright start to the season, Gronkowski has become banged up with a rib injury then this recent back injury has kept him out of action. In his absence, Cameron Brate and O.J Howard have maintained a low fantasy committee. If Gronk plays, I won’t be expecting a high snap rate and adding in Brate/Howard, it is a situation I want to avoid. 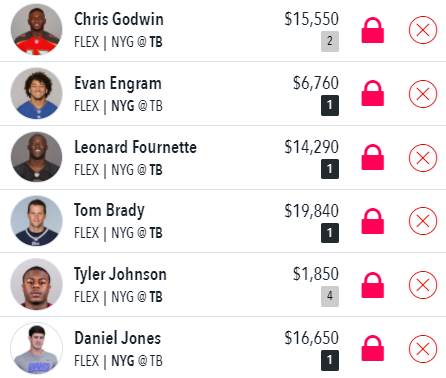