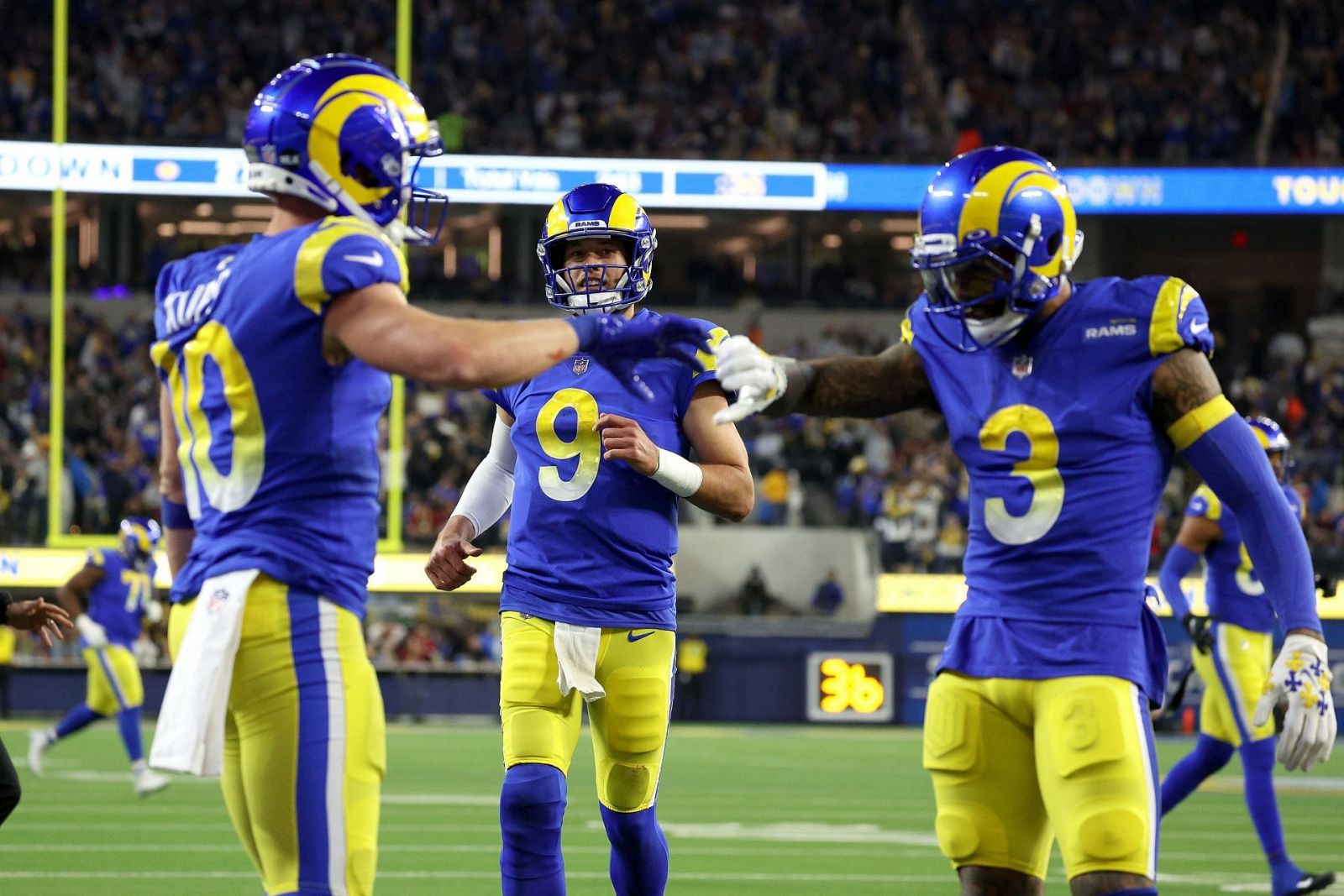 There’s only 3 games left in the NFL season, with two absolute crackers this week to decide our conference champions and Super Bowl participants. The Kansas City Chiefs host the Cincinnati Bengals at Arrowhead Stadium at 7am AEDT, before the Los Angeles Rams welcome the San Francisco 49ers to SoFi Stadium at 10:30am AEDT. The first game is easily expected to be the better fantasy environment, with weaker defences and superior offences leading to a 10-point gap in projected totals. These smaller slates can invite absolute DFS chaos, so lets look at some options while keeping in mind that it pays to be unique.  Draftstars has a $10,000 contest with $970 to first place, as well as the mini, micro and high roller.

Matt Stafford: To start with, it feels like we’re picking from three here with Garoppolo seemingly playing injured and not all that good in the first place. Burrow has showed plenty of late, but in reality he’s a similar QB to Stafford with a big arm and limited mobility. Burrow could be more popular in the expected shootout game, but I think the Rams can run up enough points on the 49ers to make the $2k discount meaningful on a tight slate. The obvious alternative is Mahomes, who has put up his best scores of the season the last two weeks (massive 40+ totals), and is clearly at his best in an electric team right now. The issue is that a Chiefs stack is incredibly expensive unless you take some secondary pieces, so I prefer to hope that the Rams can match them for value to free up salary.

Joe Mixon: At RB I’m more willing to pay up, with Mixon looking like the clear strongest play as a workhorse against a Chiefs defence that struggles to slow the oppositions running game. After 7 straight weeks of failing to exceed 65 rushing yards, I think there could be some more success coming on the ground to go with a very healthy passing game role while has seen 23 reception in the last 4 games. 100+ total yards, 5 catches and a TD gives a floor of 20 points, which is exactly what I expect from Mixon in this one.

Jerrick McKinnon: While Akers and Mitchell are both excellent young players who can get the job done at their salaries, I’m not sure if the ground is going to be the way to find success for either team. I’d rather look to the Chiefs where McKinnon has emerged as a surprise workhorse in the playoffs and has the crucial pass-catching role we like to see. With the Chiefs easily favoured for most points scored on this slate, the chances of McKinnon scoring a TD to go with 4-5 catches and 70-100 yards gives us another potential 20+ points. Of course Clyde Edwards-Helaire could eat into his role a bit more if healthier this week, so there is some risk and reason to consider Akers as an alternative.

Odell Beckham Jr: OBJ has slowly grown into a role at the Rams which has him looking mighty dangerous at this point in the season. With Cooper Kupp drawing the attention of opposition defenders, OBJ has the opportunity to get free and find some big plays anywhere on the field. That includes a healthy red-zone role and decent volume. We’ll want to see either 100+ yards or a TD to ensure he hits value, but the ceiling is a little higher than that, making him my preferred stack partner with Stafford.

Tee Higgins: The young Bengal continues to be second fiddle to Ja’Marr Chase, but it’s closer than the price gap suggests. A handful of yards of getting the bonus last week, as well as close top scoring a couple of times, there is way too much ceiling in Higgins for this price. With the Bengals likely to be spreading the ball around to try to keep up, the volume should be there and Higgins feels pretty safe at this price compared to Aiyuk/Pringle right above him. A stack with Burrow also makes a lot of sense.

Jauan Jennings: The 49ers passing game is not pretty at the moment, but if we need someone at minimum price it’s basically Jennings or Demarcus Robinson. Robinson is 6th in line at the Chiefs right now for targets, while Jennings is probably 4th on his side. It’s hard to say which is better, but I’m leaning towards Jennings as a bring back on my Rams stack. Mohamed Sanu is similarly viable if you need the extra few hundred in salary.

Tyler Higbee: The easiest way to choose a TE is to make them fit into your stack. Higbee has averaged 5 catches a game over the last 6 weeks, giving him a floor of almost 10 points. That’s better than what Kittle has been doing, and not far enough off Kelce to justify the big price gap. Uzomah has been doing similar things, so either of them is viable depending on what stack you are building. A TD and/or a big play pushing the yardage total up is well within the range of outcomes, meaning it’s farm from impossible that Higbee could outscore Kittle/Kelce outright.

Los Angeles Rams: With Burrow and Mahomes playing so well, it’s difficult to see the optimal DST coming from that game. That only leaves me one choice with a Rams stack my preferred option, and it makes sense to target the injured and struggling Garoppolo who could be under plenty of pressure if the Rams can get the kind of early lead they had last week. The salaries are close enough that it’s barely a factor. 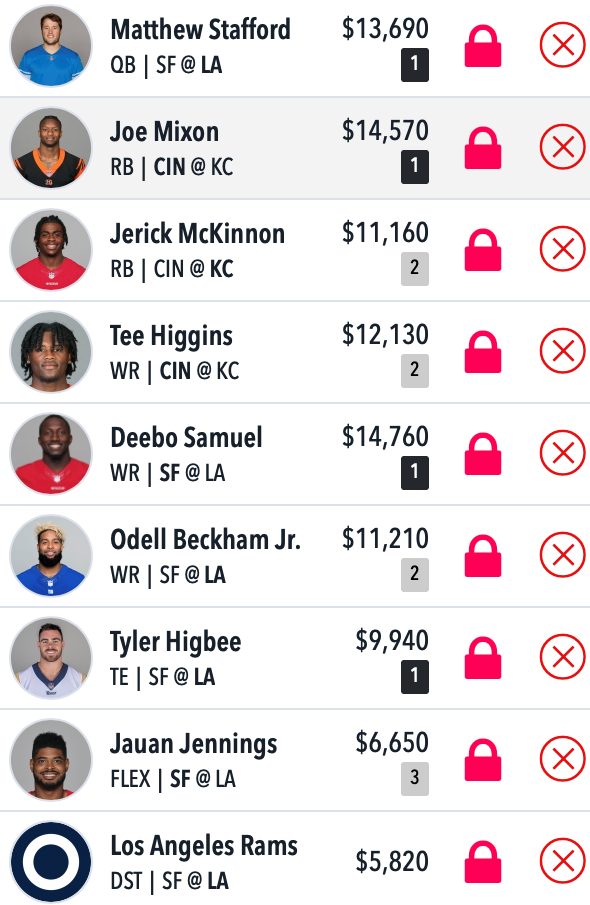