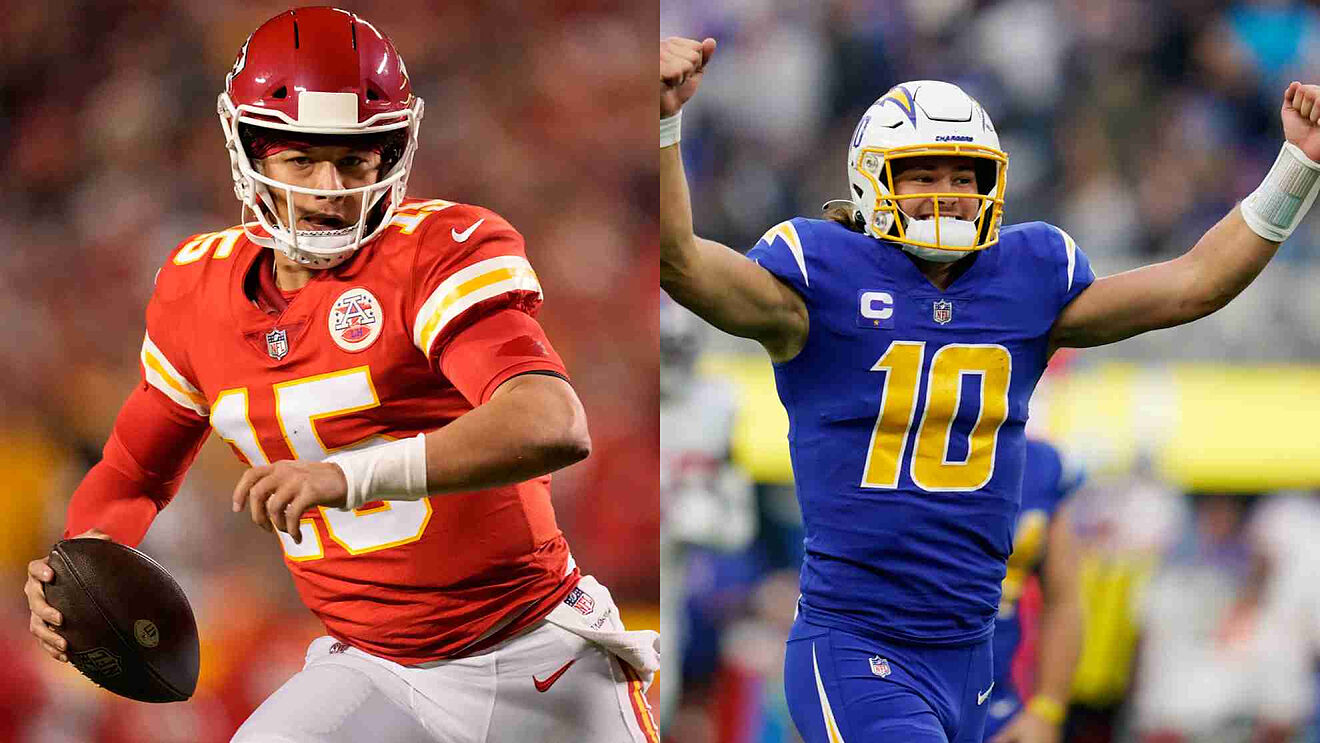 Week 15 of the NFL starts on Thursday Night in the States with the Los Angeles Chargers (8-5) hosting the Kansas City Chiefs (9-4). A fantastic matchup on paper yet the league is currently on tenterhooks with the rapid rise of COVID infections forcing players into protocols. Things can move fast here but being the only game on Thursday Night, we can safely get Daily Fantasy contests away. However let's put that aside because the top spot in the AFC West is on the line!

Chargers - RB Austin Ekeler is a game-time decision with an ankle injury. The team says he is sore but should be good to go. WR Keenan Allen has cleared COVID protocols and will return.

Chiefs - WR Josh Gordon tested positive to COVID on Monday and is doubtful to play unless he clears protocols in time.

By far the biggest total for the week and playing in the friendly conditions at So-Fi stadium, this game screams a lot of fantasy points. These two teams met back in Week 3 with the Chargers winning but the Chiefs defence has improved out of sight in the past 5 weeks. Kansas has held teams to under 10 points per game on average but throughout the week both teams have either lost key defensive personnel either to injury or to COVID protocols. It will be interesting if the Chargers offence can get on top when the Chiefs absolutely roughed up the Raiders last week.

Think this is a no brainer when considering the salaries we have from both QB’s and compare that to Hill who is $5,000 cheaper. Of course you want to be correlating Patrick Mahomes when taking Hill, but he could actually outscore both Quarterbacks in this matchup. Of course his last two weeks have been on the low end of the scale, and you get that in certain situations with Kansas' defense taking over. But I am backing him on talent here.

Another player in the same exact mould as Hill because he wasn’t simply required in the past two weeks. Kelce’s 3 catches for 27 yards isn’t simply going to get it done at this price tag, but the Chargers do leak a stack of fantasy points in the position. After two poor outings, it may be time for Kelce to reintroduce himself as the Chiefs big weapon down field.

Not the smash play for cheap value unlike last week with Keenan Allen back, but after receiving a team high 7 targets last week, we may see the Chargers keep Palmer in for 3-wide sets and possible sweep running plays. I don’t really trust any of the secondary pieces for the Chiefs so Palmer is my cheapie this week. Being $100 more expensive than Jalen Guyton helps for ownership % too.

The Chiefs defence has improved in getting to the Quarterback but however have conceded high numbers to opposition Running Backs via the pass and rushing yards. Ekeler rolling his ankle has put me on the fence for this one. The Chargers say he is right to go but I am not so sure here. Great play if he gets going but dust if he is no good on that ankle.

I might need to put my recency bias to one side but every time I play Cook at a cheap salary he is either missing out work to Donald Parham or not getting any at all. Then looking through his game log and he has scored 2 TD’s in his past three games. Popping up on the injury report earlier this week has made me stay away this week. 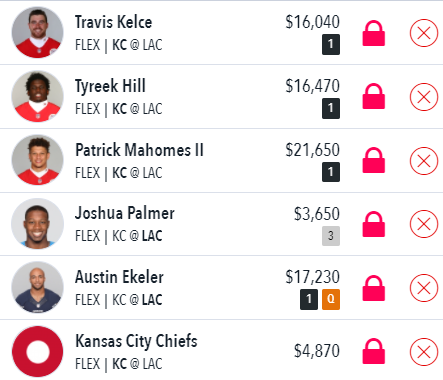