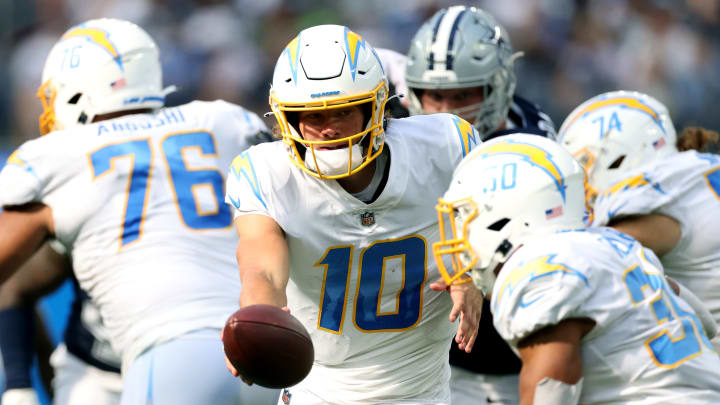 Two hot teams with great seasonal starts round out Week 4 of the NFL on Monday Night in the states (Tuesday morning in Australia). The 3-0 Las Vegas Raiders travel to LA to take on the Chargers who sport a 2-1 record to start the year and a win last week against the Chiefs. Small spread and high game total could mean a potential shootout under the huge screens at SoFi stadium.

Raiders - RB Josh Jacobs will be a true game-time decision on Tuesday morning with the Running Back to do a fitness test prior to the game.

Chargers - Are good to go

While the targets have been spread around in this Raiders offence, Waller still leads the team in targets (33) despite only catching 10 balls in the last two weeks. With a stingy Chargers secondary that should lock up the Raiders receivers, I am looking for Carr to target Waller many times here.

Some would say that Mike Williams has gone past Allen as the Alpha dog in the receiving attack but Allen is still leading the team in snaps, routes and targets in Week 3. It was just Williams grabbing two TD’s and 36FP against the Chiefs. With a significant discount on DraftKings I expect some ownership here but on Draftstars, Williams is $500 more expensive so I expect Allen’s ownership to be lower.

The matchup is bad but the price is excellent on Draftstars for Renfrow. The slot receiver has caught at least 5 balls in each game this season and scored in endzone against the Dolphins last week. If his price was in the five figures on Draftstars then I would have grounds to fade but the 2nd leading target receiver is just too cheap to ignore here.

Not sure if it is a gross price on DK or a mistake on DS, but Barber’s fantasy outlook is all dependent on Josh Jacobs status. With Jacobs out last week, Barber had 26 carries and caught three balls which easily smashed the DS price if this production continues. However if Jacobs is back then expect his outlook to plummet and he becomes overpriced on DK. Also if Jacobs does play, that $7,830 price on DS is also underpriced.

The Chargers have held featured wide-outs Terry McLaurin, Tyreek Hill and Amari Cooper to scoreless endzone receptions and under five receptions through 3 weeks, thus Ruggs’ outlook is a gloomy one. Carr does like throwing the deep ball but the Chargers have defended 20+ yard attempts very well. Don’t like Ruggs in this spot here. 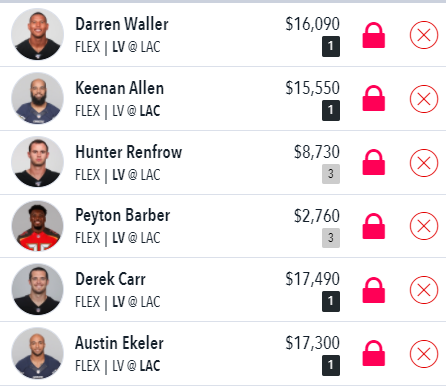 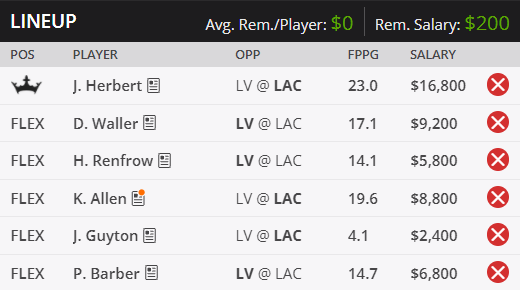