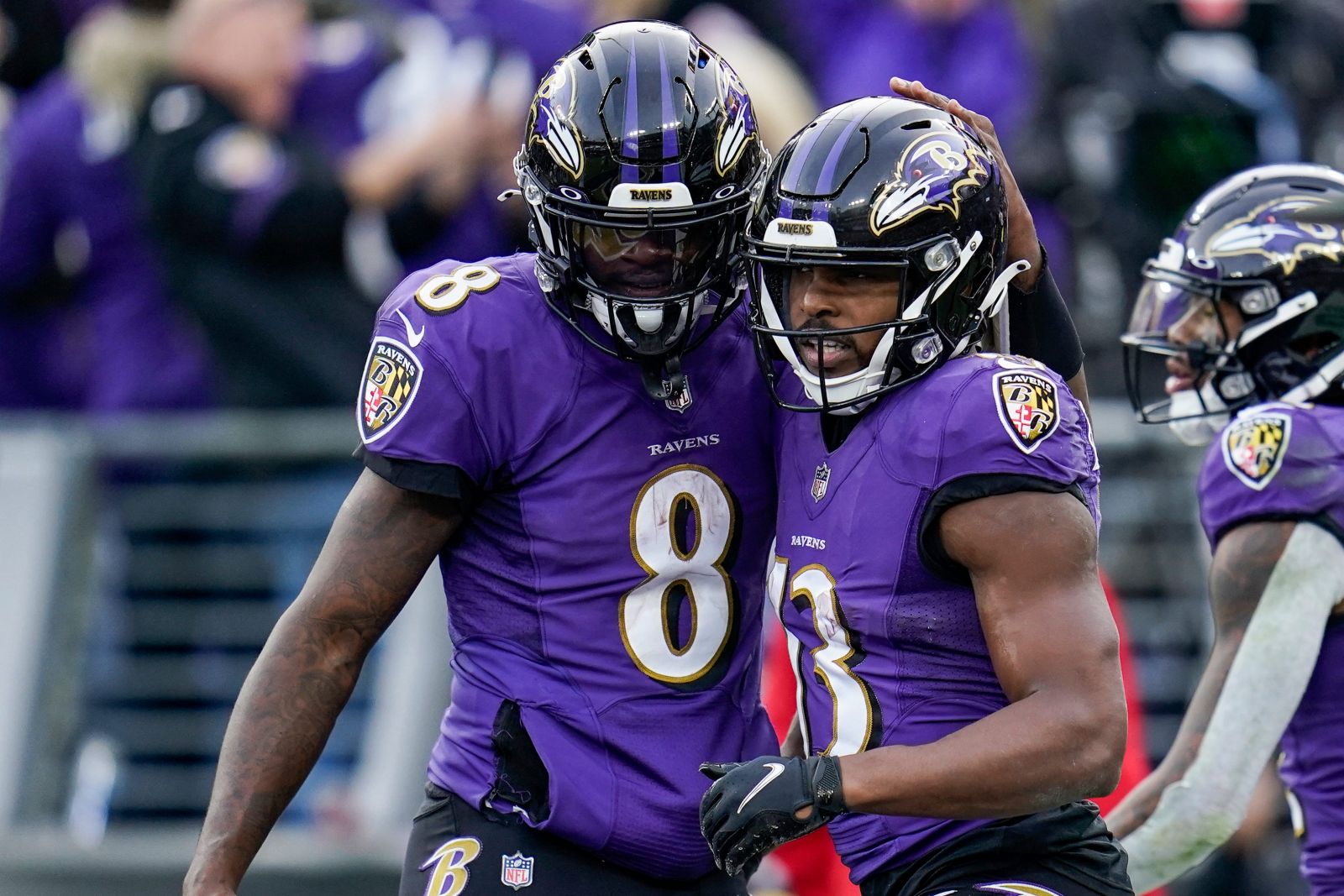 Week 10 of the NFL starts on Thursday Night in the States with the Miami Dolphins (2-7) hosting the Baltimore Ravens (6-2). Both teams are coming off victories last week, although the Dolphins did defeat the low ranking Texans. The league is abuzz with the play of the Ravens with QB Lamar Jackson still running a ton but also letting the ball fly more often this season. However this season always seems to throw up the big upsets and this standalone game could be no different!

Draftstars are back with a $6,000 contest in the 6-man ‘Flex’ contest with NBA now back up and running in the same time slot. Whilst this will be the last time Australian DraftKings customers can go for the Millionaire in their ‘Showdown’ format.

Baltimore - RB Latavius Murray is Doubtful with an ankle injury. WR Sammy Watkins was a limited participant in practice and is Questionable for the game.

Dolphins - QB Tua Tagovailoa is Questionable with a finger injury, with reports that the QB will be a game-time decision on Thursday Night. WR’s Devante Parker and Will Fuller remain on injured reserve.

The slate depends on the availability of Tagovailoa, especially on Draftstars as they are under assumption he sits and we get QB Jacoby Brissett. If Tua plays then eat up the massive $3k chalk that is available. However if he sits, then Ravens options are going to be pretty popular. The run game got going again for the Ravens with Freeman and Bell getting a stack of carries against the Vikings. But the offense does run through Lamar Jackson in this try to pass first then scramble second.

Absurdly high price tag, but out and out highest projected player on this single-game slate. Jackson only rates behind Tom Brady for Quarterback rankings this season and now gets a matchup against a defence that has struggled against opposition Quarterbacks. Might be hard to get to him in the CPT spot on DraftKings but is more than playable in the Flex spot on both sites. If Tua plays then no dramas at all on Draftstars. 6 game average of 26.7 fantasy points.

Gesicki, regardless whoever is the QB on Thursday Night, will be in line for further work with both Parker and Fuller on injured reserve. 20% Target share against the Texans in Week 9 and has played 80%+ snaps in the last three weeks. Priced as the cheapest of the main attacking players on the slate, Gesicki brings redzone upside against a defence that leaks fantasy points to TE’s.

Need some value and while you won’t be able to find too many value plays on the Ravens side. Hollins has been accumulating targets since his introduction in Week 5. In five games Hollins has turned 17 targets into 10 catches for 106 and 2 TD’s. Had 6 targets against the Texans last week from Brissett and will be likely in line for more work if the Ravens get out to a lead. Quietly confident here.

With Latavius Murray still injured, Freeman has seen an uptick in touches, snaps and fantasy points in the last three weeks for the Ravens. However, Le’Veon Bell and to some extent Ty’Son Williams are still in the Ravens backfield, to go along with Jackson to spread the rushing attack around. The price is tempting but I wouldn’t be going to hard with Freeman.

Watkins was close to return for the Ravens in Week 9 but subsequently sat against the Vikings. Watkins then watched Rashod Bateman essentially grab his WR2 role with 8 targets for 5 catches and 52 yards. If Watkins does return for this game then I expect a smaller role than one would expect. 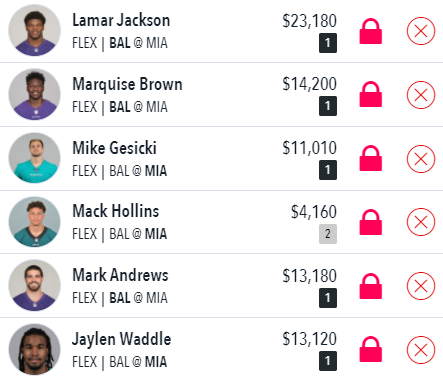 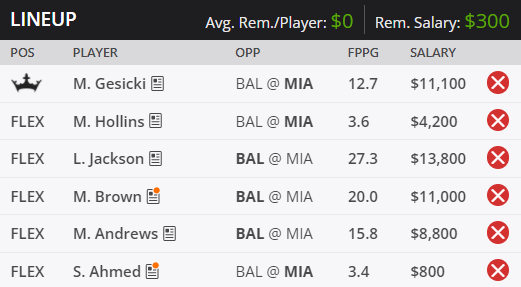