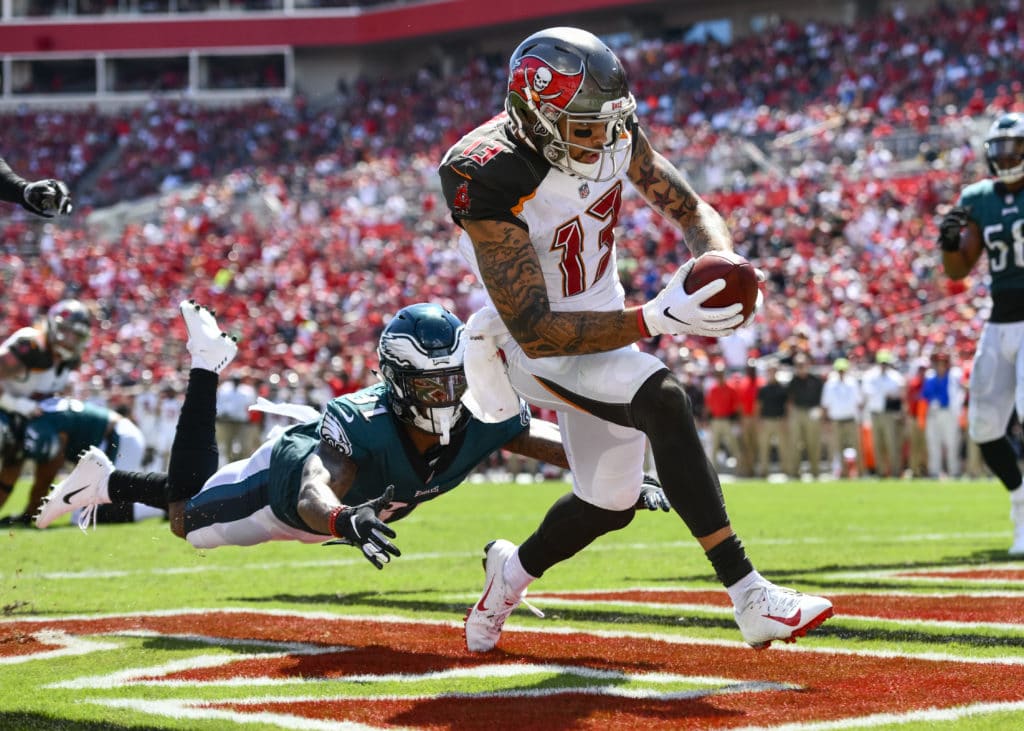 One of the hottest teams in town the Tampa Bay Buccaneers (4-1) get on the road to start Week 6 and head up to Philadelphia to take on the Eagles (2-3) on Thursday Night NFL. After giving the Dolphins a touch up in Week 5, the Bucs led by Tom Brady will look to keep their top spot in the NFC South against the Eagles. It is shaping up to be another shoot-out on the scoreboard which could lead to a high scoring fantasy game.

Draftstars are back to a $12,000 contest in the 6-man ‘Flex’ contest whilst another Millionaire Maker is up for grabs on DraftKings in their ‘Showdown’ format.

Bucs - TE Rob Gronkowski is still out with his ribs injury.

Eagles - TE Dallas Goedert is on the COVID-19 list on Tuesday. Very unlikely to get off by game time.

Make no mistake, the Bucs are a pass first then pass again team, leading the league in passing yards per game (349 per game) and just behind the Bills and Cowboys for total points scored. However the Bucs secondary are depleted and teams are easily getting back through the air on defence. Leading the league in passing yards against, this matchup sets up nicely for the Eagles attack to either chase if from behind or get off to a quick start. Both front lines however are stout which could lead to quiet night’s for running backs and defensive lines. QB’s and receivers are the flavour here.

Taking away the struggle in New England, the GOAT is balling once again in this high powered Bucs offense. Threw for an incredible 15 TD’s so far and leads the league in average passing yards. Brady is matchup proof regardless of the stadium he is in and the defence he faces. Top projected and top salaried player on the slate, a scary fade and an easy selection on Draftstars.

Slam dunk price on DraftKings, Ertz has been sharing the Tight End role with Dallas Goedert but with Goedert likely out with illness, Ertz will play the every down role for the Eagles. Although just the one catch last week against the Panthers, Ertz has been posting 10+ point fantasy games against the Chiefs and the Cowboys. The Bucs have given up big target shares to Tight Ends with Hunter Henry (28%) and Mike Gesicki (18%) in their past two weeks.

Leading the Eagles in targets, receptions and receiving yards, Smith has an excellent matchup against the Bucs to improve his lone touchdown he has scored this season. Priced under the Bucs receiving weapons, Smith’s ownership should come under the likes of Evans and Godwin. For Smith to smash however, we need to start seeing more TD’s and Thursday Night could be the spot to hit.

A lot of fantasy players were all over Fournette on Draftstars last week and Fournette was good, posting 21 fantasy points from a TD, 4 receptions and a total of 110 yards. Gio Benard did return for the Bucs and was involved in 3rd down situations but I do like this matchup against a leaky Eagles D against the Rush. The price is tricky however on both sites and requires Lenny to continue to play a huge role to get there.

With Gronk still out for the Bucs, Brady has gone away from targeting Howard and Brate, with the two Tight End’s combined accounting for 11 targets in two weeks. Gronkowski had a total of 21 targets through 3 weeks and that target share has gone elsewhere. I will be avoiding this situation with a healthy receiving corp/backfield to target. 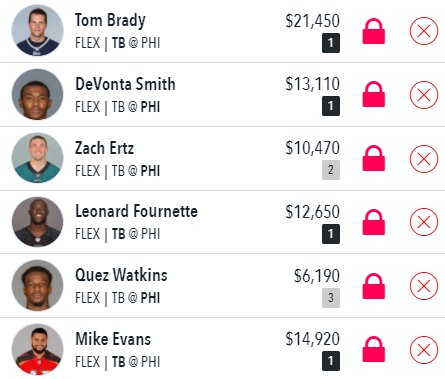 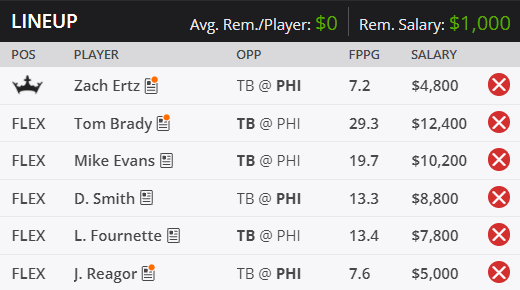