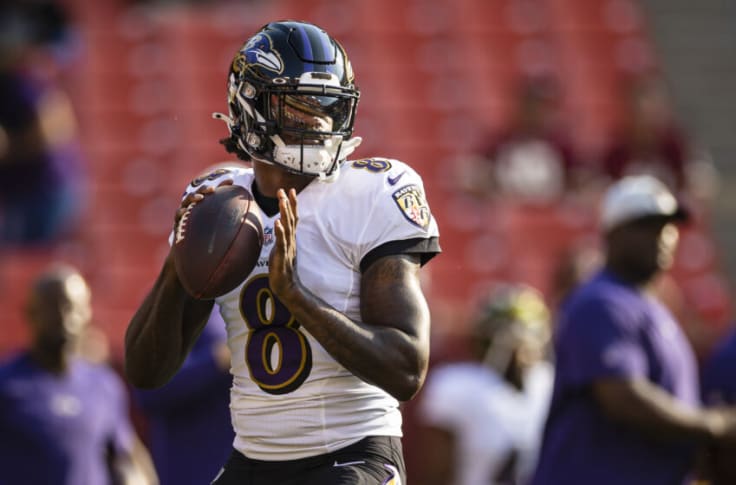 It has been a huge opening weekend for the NFL with well supported Daily Fantasy Pools across Draftstars and DraftKings. So much so, Draftstars have boosted the guarantees for Monday Night Football, so let's get stuck into those prize poolsl! We head to Allegiant Stadium in Las Vegas for their first proper home game with fans as the Raiders host the Baltimore Ravens. The Ravens have been cursed with injuries to key personnel right before the start of the season but still go in as a road favourite.

Draftstars have a $15,000 contest up for grabs in the 6-man ‘Flex’ contest whilst another Millionaire Maker is up for grabs on DraftKings in their ‘Showdown’ format.

Raiders: In worrying news, Josh Jacobs is now questionable with illness after clearing a toe injury throughout the week. Will need to find out at 90 minutes before kickoff for Jacob’s status. Keynan Drake and Peyton Barber will look to benefit if Jacobs cannot go. UPDATE: Jacobs is good to go.

It is a prime time road favourite against a side that will benefit from a new fan base in their new stadium. The injuries for the Ravens are cruel but in essence shouldn’t stop the offensive structure based around Lamar Jackson. What is fascinating is the use of each team's Tight End in this matchup. The league's leading target and reception leader Darren Waller will look to continue his high production but the Ravens fellow Tight End Mark Andrews is also a quality target.

The injuries have opened up some value on Draftstars but DraftKings have reacted to the news from the Ravens. Let’s see who we can target for Monday Night Football

The most expensive player on the slate will be looking to put that playoff match against the Bills behind as they try and run the AFC once again. Exceptional floor and high ceiling potential with his ability to run the ball, Jackson could be asked to provide more of the run game with the injuries to the running back core. The high salary is no issue on Draftstars but has relegated him to flex builds on DraftKings.

I have Carr projected the highest for the Raiders and we can get him at a significant discount to Jackson and he is cheaper than his no.1 target in Darren Waller. The Ravens secondary have lost CB Marcus Peters for the year but this Ravens defence is strong. This however won’t stop Carr from slinging it over 40 times, especially if Jacobs is out and Drake gets those check-downs from Carr. Likely to be a strong CPT selection in DraftKings showdowns, but making it work may see him become a more highly owned flex play.

Yes another expensive piece but if Carr is going 40+ then expect at least 10+ targets coming Waller’s way. Waller was the clear Tight End target for fantasy in 2020 and nothing else suggests that the Raiders are going to move away from this. Fantastic CPT selection on DK as he has a 30+ ceiling which was evident in his last 5 games of the 2020 season.

Williams is way too cheap on Draftstars to ignore and will be extremely high owned. It is hard to see others in his price bracket on DS exceeding his expected output and fantasy scores. However I am 50/50 on his DK price. Williams is unproven in this running back “unfortunate circumstances” role, especially with three recently signed up seasoned vets waiting in the wings. But alas the Ravens are going to back him in for Week 1.

Just a situation I do not want to be a part of after appearing on the injury report for a late illness. After a blistering Week 1 back in 2020, Jacobs was sporadic for the rest of the Raiders campaign and does have Drake and Barber now backing him up if he fails to fire early, or does not suit up at all. If you are set and forgetting your lineup, then excluding Jacobs is a suggestion. 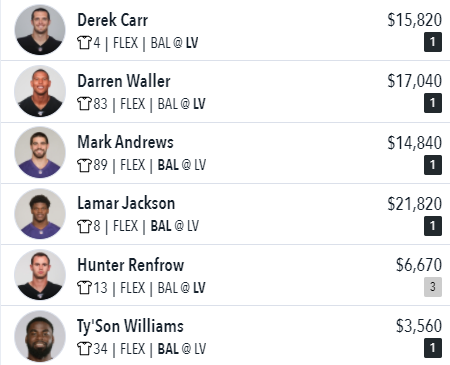 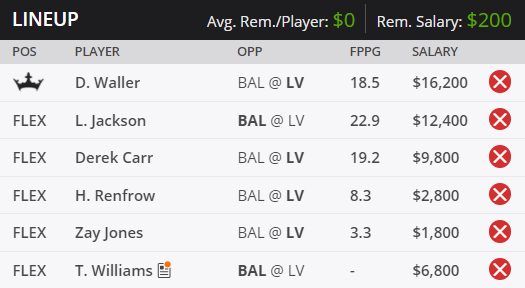