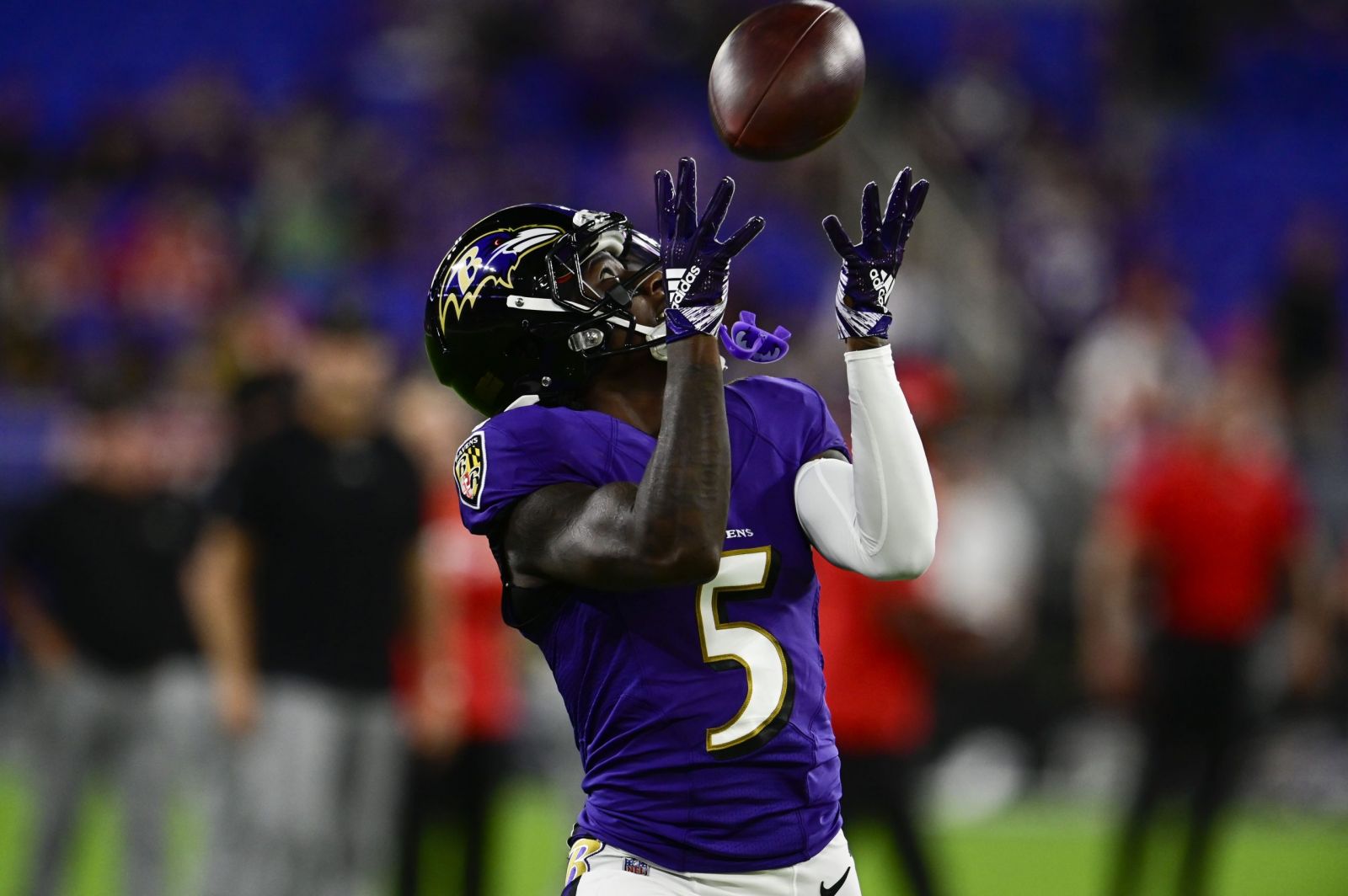 Week 5 of the NFL ends on Monday Night with a AFC clash between the 3-1 Baltimore Ravens and the 1-3 Indianapolis Colts. The Colts are coming off their first win of the season but they are a big road underdog against the Ravens who have rattled off three wins on the trot and are looking to gap the Browns and Bengals who lost yesterday.

Draftstars have this game pegged at a $12,000 contest in the 6-man ‘Flex’ contest whilst another Millionaire Maker is up for grabs on DraftKings in their ‘Showdown’ format.

Tough to fall in love with this game with a Colts side that has a Quarterback failing to score 20+ fantasy points this season (injured in Week 3 hasn’t helped) and an attack that has only achieved 100+ rushing yards once (Taylor) and 100+ receiving yards once (Pittman) as well. However this Ravens secondary has leaked receiving yards and fantasy points to receivers, and with the Colts as 7 point dogs on the road, it could see Wentz and his receiving weapons come into play. For the Ravens it is hard to go against Lamar Jackson who is just about matchup proof. However the Colts run a zone defence which should limit Jackson's rushing upside plus harnessing the deep ball threat of Sammy Watkins.

Don’t really need an explanation on the reasons while we need to play Jackson, but you will need to make sacrifices in your lineup to fit his exorbitant salary. With no injuries from either team creating value, your lineups may look a little off with Jackson included. The Colts defence will make things difficult for Jackson on the ground but he is clearly the best projected player on the slate.

Is this point chasing after 2 TD’s off 3 catches for 42 yards from Week 4? Maybe… But Alie-Cox out snapped and ran more routes than fellow Tight End Jack Doyle in Week 4. The price is cheap enough on Draftstars to make him a flyer against a Ravens defence that has given up a stack of fantasy points to opposition Tight Ends.

Pittman is the main receiving weapon for the Colts, leading in targets and receptions but scoreless on touchdowns through 4 weeks. It is not through a lack of trying with Wentz trying multiple times within the redzone for the score but Pittman does have the opportunity here as a road underdog. The price on Draftstars is very appealing.

As I mentioned in the overview, the Colts look to limit big plays by playing a zone defence, forcing your production within the zone. Watkins is in the top 5 of the league for yards per catch yet hasn’t scored a TD through 4 weeks as of yet. The price is tempting on DraftKings to roster Watkins in a ceiling game but I am on the fence here.

With the season long injury situation behind them, there are potentially four options for the Ravens that we need to monitor at final teams. Le’Veon Bell was elevated from the practice squad in Week 4 but is likely to go back to the squad this week. Ty’Son Williams was a healthy scratch last week but may get the call to play this week whilst Devonta Freeman has offered zero in terms of fantasy when he played 6 snaps last week. While Latavius Murray did score a touchdown last week, he is averaging 37 yards per game. Regardless of news I am avoiding the RB’s from the Ravens here. 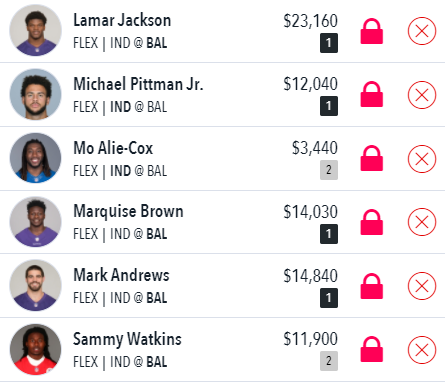 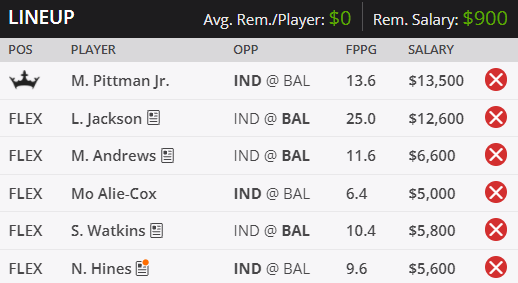