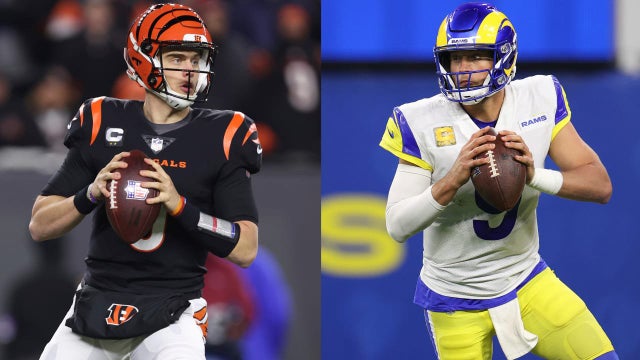 We’ve made it to the single biggest show in sports, and sadly our last NFL slate for the 2021-22 season. The 56th edition of the Super Bowl has turned out to be a home game for the Los Angeles Rams, with the Cincinnati Bengals travelling to SoFi stadium for the chance to complete one of the great zero-to-hero stories we’ve ever seen.

Draftstars has jacked the prize pool back up to $20,000, with $2184 to first place. There is also a High Roller and a Mini. As always, there are plenty of storylines, but our job here is simply to figure out who will score a lot of fantasy points. Let’s look at a few options.

I’m going to pair the obvious Rams guns together because they’ve played in such perfect harmony all season since Stafford arrived from the Lions. The ascension of Kupp to best WR in the NFL has had a lot to do with Stafford, who finally gets to play on a good team after a decade of mediocrity in Detroit. The fact that they’ve reached this point is fairytale stuff, and the Bengals defensive unit is not good enough to slow them down to any significant degree. I think building lineups from the very top and hunting around for value after that looks like the way to go, especially with the Rams running game having struggled in recent weeks.

Boyd is far from an every lineup option, but there are some things going in his favour in this game. If C.J Uzomah doesn’t play or is limited by his knee injury, Boyd stands to benefit by getting more of the targets in the middle of the field, as well as more chance of being targeted in the redzone. Even if Uzomah plays, Boyd has some upside as a unique who can give us 20 points if everything goes in his favour. I don’t expect things to be easy for the Bengals passing game, but they should be forced to throw it enough that there is still plenty of opportunities for the pass-catchers to be useful on PPR volume alone.

It looks like Tyler Higbee won’t be able to recover from his knee injury in time to play, with leaves Blanton as the Rams primary TE. Since week 17 Blanton has consistently had a growing role behind Higbee, and hasn’t looked out of place when targeted. He should be able to fill the majority of vacated usage, which usually equates to 3-5 catchers for 40-50 yards, or 8-10 points. That makes him comfortably the best value play on the slate, with plenty more upside if he happens to catch a TD.

Burrow is fantastic, and watching him play so well throughout the playoffs and engineer a massive comeback against the Chiefs has been some truly special stuff. However, he’s relied on quick decisions and some underrated scrambling abilities to do so, with his offensive line not very good at keeping pressure away from him. Now they’ll face by far the best pass rush they’ve seen so far, with Aaron Donald and Von Miller both all-time great game wreckers and a couple of other quality players to mop up the destruction they cause. Burrow is good, but I doubt he can outdo Stafford & Kupp in this one with the Rams coming after him all day long.

Like Burrow, Mixon has been really good this season and one of the key reasons that the Bengals have made such a dramatic improvement. However, there are a number of things going against him in this game. First is that the team is an underdog, meaning he could lose opportunities of the Rams get out to an early lead. Second is that he has been losing some of his work to Samaje Perine in recent weeks. Third and perhaps most importantly is that the Bengals have increasingly relied on Burrow and the passing game as the QB has gotten healthier and more confident throughout the season. I think Mixon’s chance of a ceiling score are low, and I’d rather take a shot at Ja’Marr Chase or Tee Higgins who will get plenty of opportunities if the Bengals do indeed play from behind. The Rams are also better at defending the run than the pass.

The Bengals defence are better against the run than the pass, which is just one reason I’m not sure about Akers. The others include any after-effects of his injury riddled season, sharing the role with Sony Michel, and whether the game script will suit him. If the Rams play with a lead as expected, then there should be a big enough workload for both Akers and Michel to have a chance to exceed value. Akers has been getting roughly double the workload throughout the playoffs, so has the best chance to post a ceiling score and end up making a difference for our lineups. 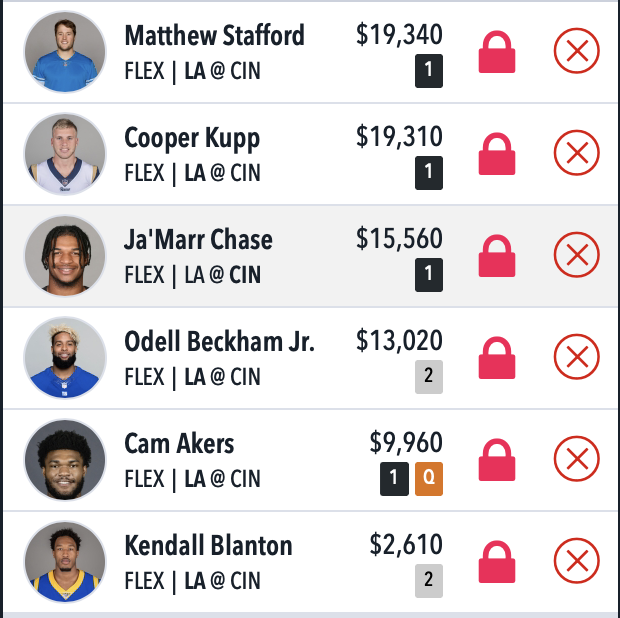