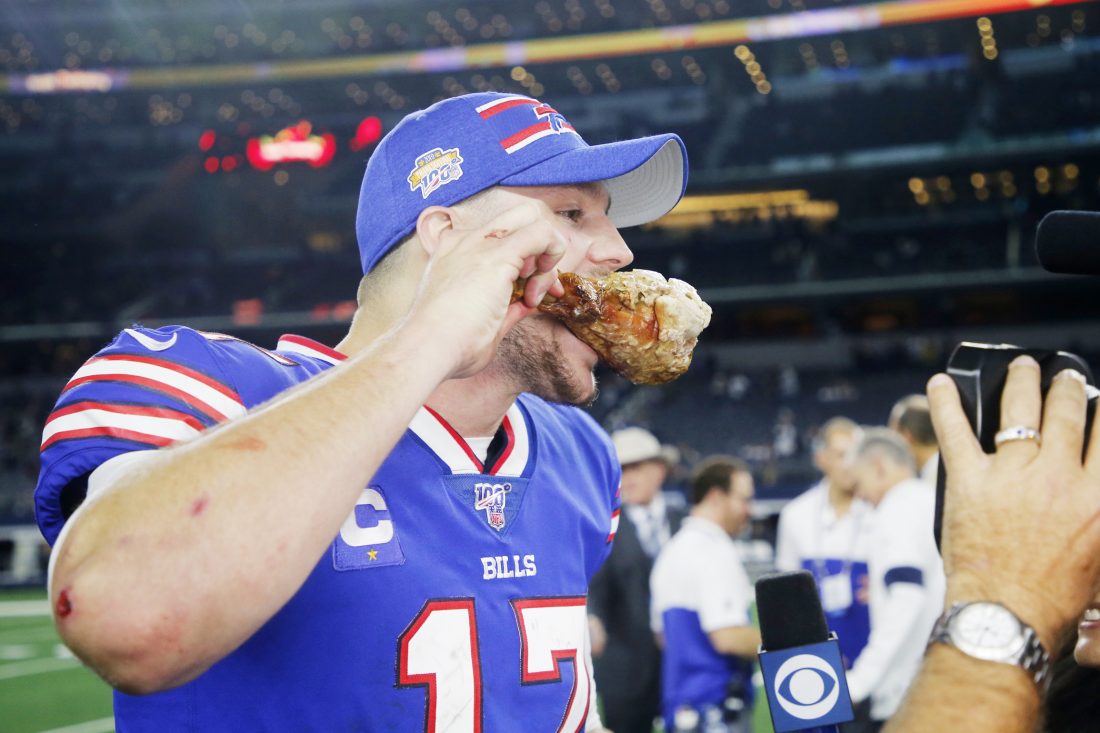 It is Thanksgiving in the USA which means the tradition of the NFL throughout Thursday (Friday morning in Australia). A special three game slate with games back to back starting at 12:30pm ET in the US (0430 AEDT on Friday morning). With no NBA on Friday, the NFL slate is the only sport in town so do not miss the early start!

On Draftstars a $20,000 contest is available for the three games along with the mini, micro and the High Roller.

Starting with the early game, the field and myself included are going to have no action with the passing games of the Lions and to some extent the Bears. Both starting QB’s are banged up with Justin Fields with sore ribs (OUT for this game) and Jared Goff likely to be thrust back in with an oblique injury. QB backup Tim Boyle struggled against the Browns and while he is still the flat min on Draftstars, he won’t be considered here. The only two players that can be rostered with confidence are D'Andre Swift and David Montgomery.  Whilst Darnell Mooney seems to be Andy Dalton’s favourite receiver (12 catches and 130 yards from Dalton).

For the second game, the Raiders are on the skids after losing their last three games and now need to face the Cowboys after a rough game against the Chiefs. The injury report looks fine for the Raiders but there are concerns for WR CeeDee Lamb and RB Ezekiel Elliott that need to be monitored before kick-off. The Raiders are clearly affected by the removal of Henry Ruggs with only Darren Waller commanding targets and receptions in their 3-game losing streak. The Cowboys will be thin if Lamb doesn’t recover from his concussion, who already have Amari Cooper on the Covid list. Regardless I will be looking at the likes of Elliott/Pollard and Michael Gallup who got a ton of targets last week but couldn’t catch them all. The only thing is and this is big, Draftstars pumped the Cowboys salaries sky high…

After failing a stack of fantasy builds last week, the Bills are back in a “get right spot” against the Saints in the friendly dome turf of New Orleans. I am making a pretty solid assumption that Josh Allen, Stefon Diggs doubles will dominate the ownership of the slate. Whilst it will take 33% of your salary there is enough value around in less than ideal situations to get to these two. The Bills run game is non-existent in a three-way committee and the Saints are brutal against the run. While Trevor Siemann is showing us something in a Saints offense that hasn’t chucked the ball all season. Siemann playing from behind against the Eagles, dropped 26 fantasy points for 3 TD’s but I fear this could be ugly for the Saints who are banged up with Ingram struggling to play and Kamara & Trautman out. I am going to make a stand here and look to avoid a rather cheap Siemann but target cheap Saints pieces instead.

Yep, just give me Allen at that sub 18k price point and move on. Well it is not as simple as this but for a player who provides a high floor (26.1 6-game average) and a ceiling with 300+ passing yards on 3 out of his last 6, I feel comfortable in ideal dome conditions. The Bills need to get back on track if they want to contend for the AFC #1 seed then Allen is the key man in this Bills attack.

Paying up to get to the Bears running back who got back up to speed after injury with 14 touches out of 20 against the Eagles. Whilst it only produced 50+ yards and one catch, the Bears are running with Montgomery and Montgomery only in the rushing game (played 95% of the snaps in Week 11), which gives me confidence against a weak Lions team.

This is dependent on whether Kamara (who is OUT) and Ingram plays. Ingram is automatic at $8,000 on Draftstars if he plays, however if both are out then next up is Jones. On a slate with so-so running back options and needing to pay down to min priced guys then having either Jones who has recently returned from injury or Ingram is the way to go here.

Diggs saved his fantasy weekend in Week 11 with 2 TD’s from 4 catches against the Colts and now faces a tough matchup against CB Marshon Lattimore. On a slate where Draftstars have priced up the Cowboys and other teams Receivers are rather rubbish, I prefer to pay up to Diggs here and hope he can get on top.

No longer on the injury report after being questionable with a foot injury, Mooney becomes an excellent play if Allen Robinson is unable to play with his hamstring injury.(trending towards being out). Mooney’s connection with Dalton is key as I mentioned above. Played 92% of the snaps in Week 11 and turned it into 48% target share.

Just enough money to have a bring back in the Saints game and Draftstars have made the Saints receivers cheap enough to roster. Smith leads the team in targets in the past two weeks (15) and has posted 10+ fantasy point scores on those two occasions. With Trautman going down and the running back situation looking dire, then Smith or Marquez Callaway ($7,520) are cheap fliers to finish a roster.

Need to be cheap here with Trautman going down for the Saints. Whilst Nick Vannett carries the TE1 tag, I am going to take a shot on Johnson who is a quick running converted Wide Receiver for the Saints. Expecting a wide range of outcomes for this selection (from 0 to 12+) but we need the money.

Taking a punt on the Raiders at the minimum who do boast a good defence, however have given up 73 points in their last two games. If you have the cash then the Bears are in an ideal spot, or if you want to be sneaky then the Lions are worth a shot. 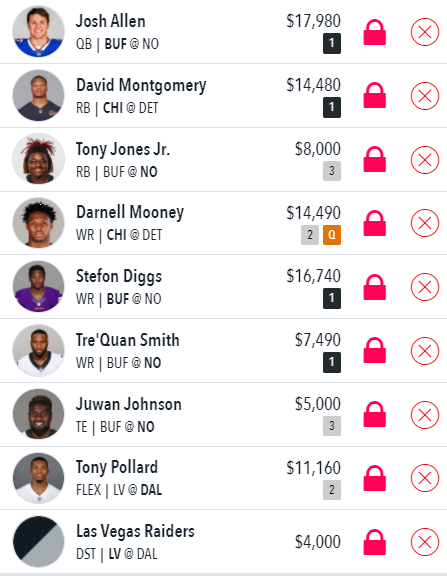