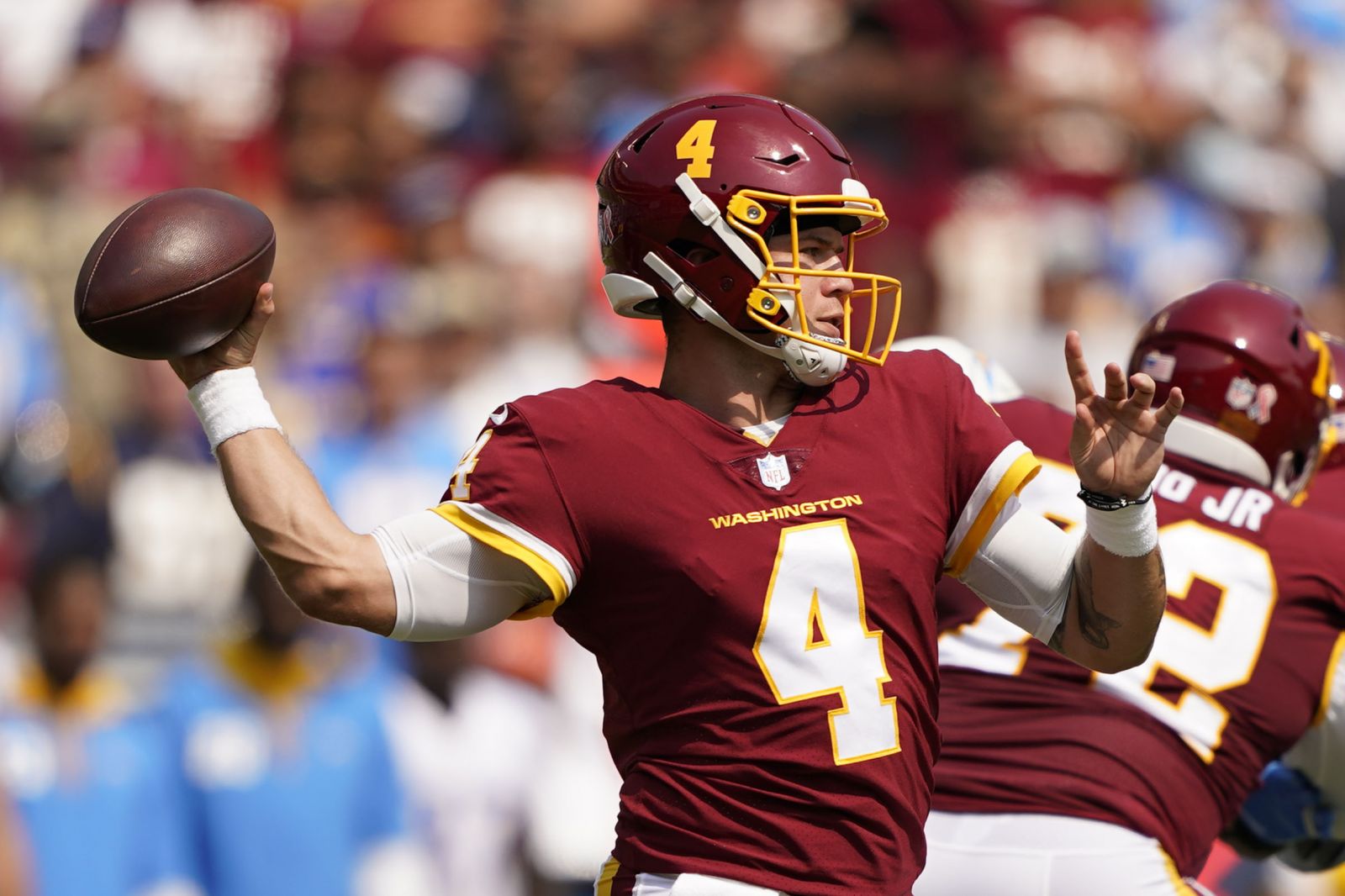 Two teams looking to avoid a 0-2 start will headline Thursday Night Football (Friday morning in Australia) in the NFL. The Washington Football Team hosts the New York Giants in a match that doesn’t scream Chiefs v Bucs potential but we still have daily fantasy action to get stuck into.

With the return of the NFL, Daily Fantasy Sites Draftstars and DraftKings are back with a variety of contests to suit every style and budget. Starting with Draftstars, the Single “Flex” contest is available with the main contest being $15,000 for a $15 entry. A mini contest is also available for an entry of $2.

Note there are some changes to the scoring system on Draftstars. Check them out in our season preview article here

On DraftKings, there are various types of Showdown contests in the lobby highlighted by the $2,500,000 Showdown Millionaire where 1st prize is $1,000,000! Entry into this contest is $15 per entry. There are plenty of contests on DraftKings including, single, 3 entry max and 20 entry max contests.

WFT’s Quarterback Ryan Fitzpatrick is out with a hip subluxation which is a 6-8 week injury. In his place will be Taylor Heinicke.

Giants RB Saquon Barkley is questionable with his knee after being limited in practice and the Giants looking to monitor snaps off a short week.

TE Evan Engram has been ruled out with a calf injury.

The low total will sound alarm bells for overall fantasy production but as Vegas suggests, this game should be a close one to follow. The injury to Ryan Fitzpatrick has brought back the prospects of the WFT’s wide receivers just a tad, but Taylor Heinicke is no slouch in the air and on the ground. It is however, a bit hard to get excited for the Giants attack when they are trying to manage their prized running back and a Quarterback who continues to cough the ball up. The leaderboards are going to be tight (well they all are) but it is going to come down to who pops for a big play in your lineup.

While there is big-play potential from down the field receivers in Darius Slayton and Kenny Golladay, the Giants are facing an elite defence in the WFT. Shepard was busy last week with a team high 9 targets and scored the only receiving TD for the Giants. If the Defensive pressure comes on Daniel Jones then Shepard will provide a safer target on smaller routes.

Both QB’s prospects are quite low but I see the dual-threat ability of Heinicke to edge out Jones in this matchup. Heinicke averaged 7 yard per rush (12 rushes for 85) in his three games last season and was tidy with a 63% completion rate through the air (49/78). Heinicke will want to impress this week as the QB free agent market will be scoured if Heinicke fails at home.

An opposition quarterback known to have ball-retention issues, an opposition backfield that is looking to share snaps and a defensive line that is hard to penetrate. The WFT D/ST is in play this week as a flex option, especially for lineups not containing Daniel Jones.

Going to be popular on DK but that DS price has me sitting on the fence for Brown. He was the clear number 2 Wide Receiver for Washington in Week 1, playing just about every snap but was only targeted 4 times. Washington receivers didn’t get much of a run once Fitzpatrick went down and now are on a short week. However the upside is there for Brown this week.

Barkley only played on 29 snaps for 11 carries for the Giants in Week 1 and it is going to be a stretch for Barkley coming off a short week. Of course he does have TD upside in red-zone sets but this Washington front line is stout and I would rather leave him alone this week. 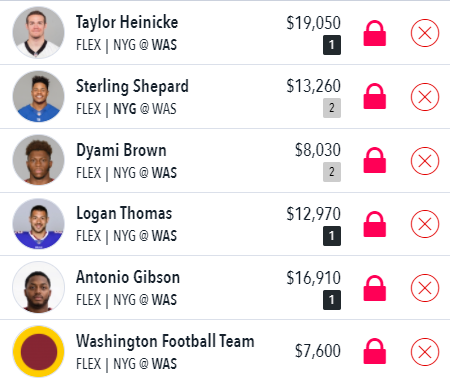 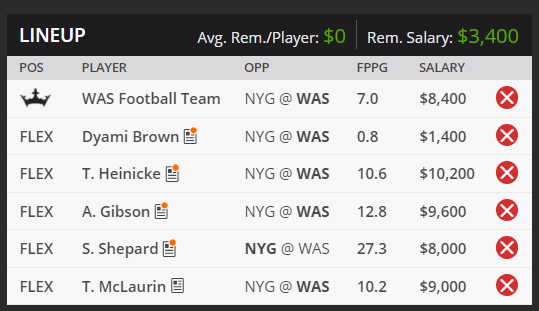