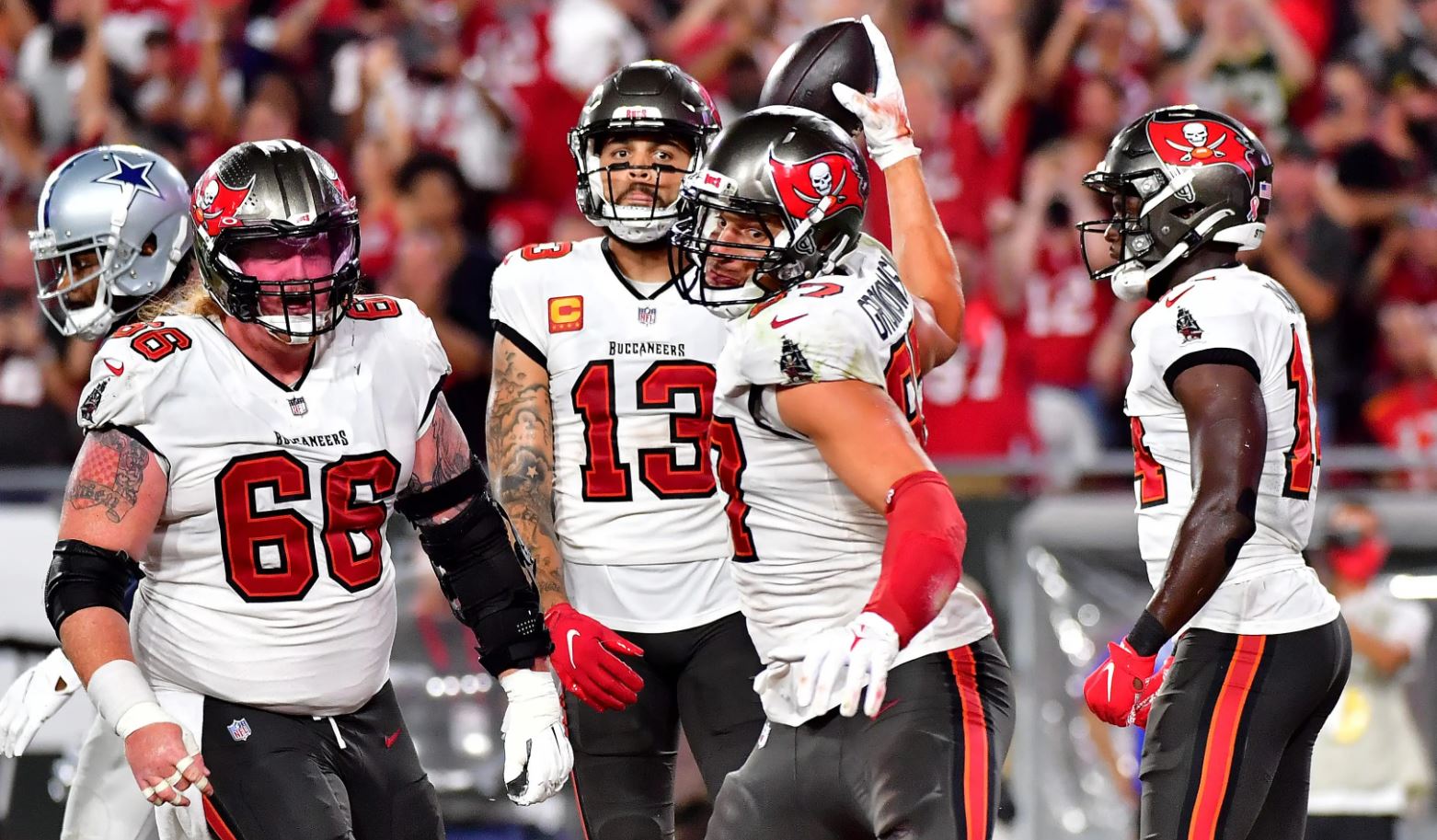 Week 1 of the NFL season gave us plenty of excitement, bookended by two last second thrillers in the prime-time slots. It’s time to do it all again, with another massive 13 game slate on the Monday morning menu. After we managed to easily fill the big GPP, Draftstars has upped the prize pool to a cool $50,000, with $4,935 to first place. But as always the Millionaire Maker on DraftKings is also there for the taking! One interesting tidbit is that the four highest total games not he slate are the four games in the late window. It makes no difference strategically, but we can expect to see a lot of movement on the leader board in the final minutes of the slate. 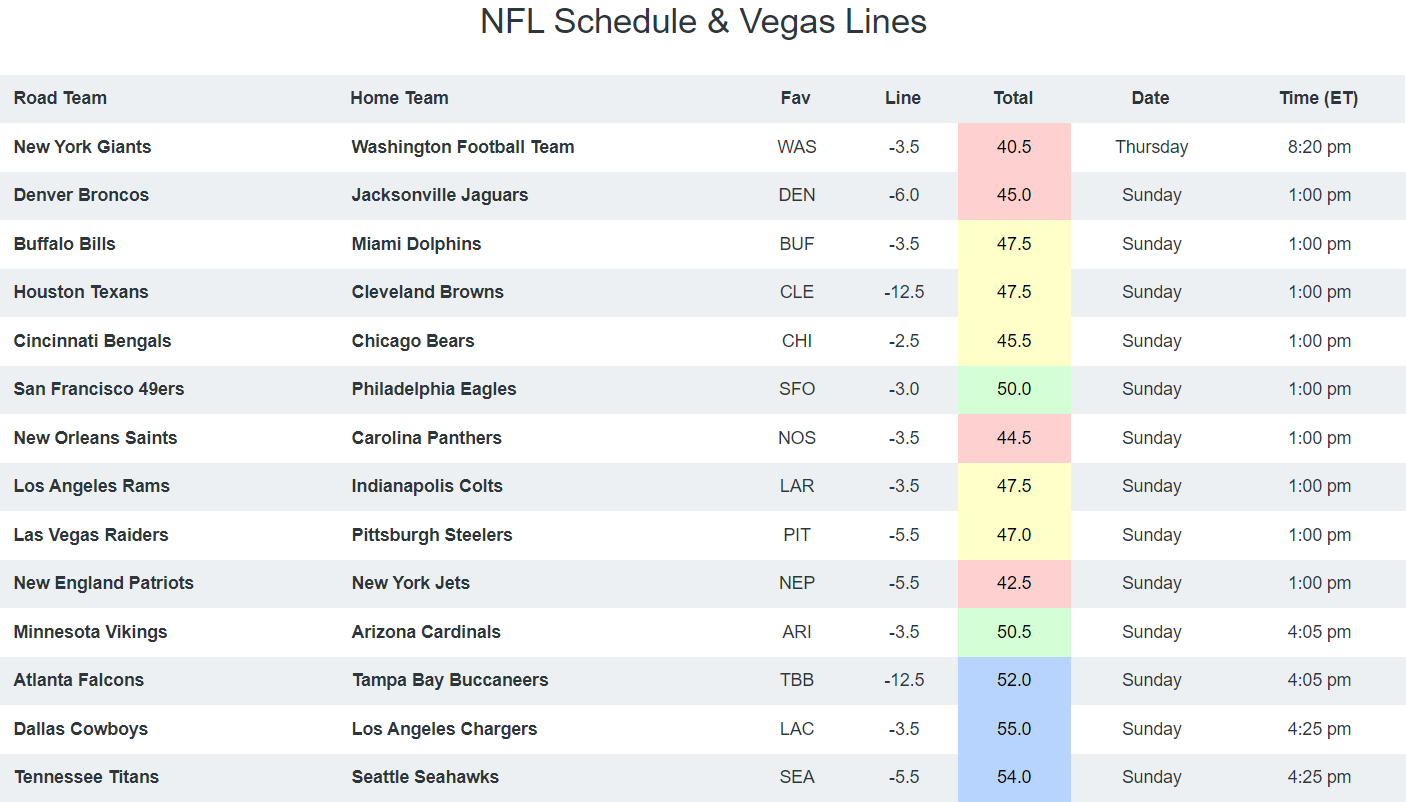 Josh Allen ($14,720 DS / $7,200 DK) Allen and the Bills were kept quiet in week 1 thanks to a well organised Steelers team. We’ve seen enough from them to know they are a talented, well coached outfit, so I fully expect things to get back on track quickly. The Dolphins are another organised outfit with a strong defensive unit, which is the only thing that can dampen my enthusiasm for this play. For that reason it’s probably more for GPP than cash lineups.

Tom Brady ($14,050 DS / $6,900 DK) The Buccaneers made hard work of a last second win against the Cowboys on the opening night of the season, but none of the blame should go to Brady. Fumbles and drops by teammates were responsible for keeping the Cowboys in the game, and that won’t continue. The Falcons are a very gentle matchup, especially if their own veteran QB in Matt Ryan plays as badly as he did last week. With several good stacking options, I think that Brady is safe again this week.

Dak Prescott ($14,250 DS / $6,800 DK) The other side of the opening night game saw Dak looking in midseason form in his first game back from a serious broken ankle. He wasn’t afraid to take a hit, and his arm only looked better as the game wore on. It looks like another shootout is on the cards, given that the Cowboys will struggle to contain the aggressive nature and rocket arm of Justin Herbert this week. That should mean another week with heavy passing volume, and plenty of fantasy points.

Mike Davis ($9,020 DS / $5,500 DK) Davis had a moderate start to his time as the Falcons starting running back last week, but the underlying workload was encouraging, with 15 carries and 6 targets in a negative game script. Despite that he saw a handy price drop, and is the closest thing to minimum priced starter we have access to. The matchup with the Bucs is very tough, but the potential for a lot of pass-catching work could cancel that out. We’d just need to see a touchdown.

Derrick Henry ($12,640 DS / $8,300 DK) After being popular and failing last week, Henry has only gotten cheaper. The problem is, the Titans looked really bad under new offensive coordinator Todd Downing. Is that a week 1 hiccup, or are we going to see the Titans struggle to replicate what they’ve done in the past? Either way, Henry is still a stud and can go off at any time, against any opponent. Ownership should fall, so this feels like a spot to gamble on the Titans being much better in Week 2.

Darrell Henderson ($12,580 DS / $5,700 DK) I was not a Henderson believer coming into the season, but it only took one week to make me reconsider. The expectation was some kind of jobshare with Sony Michel after the Rams traded for him when Cam Akers went down. Michel could still work his way into a role, but he only saw 3 snaps in Week 1 with Henderson getting 49. With the Rams looking like one of the more elite teams now that they have Matt Stafford at quarterback, Henderson should have ample opportunity to come up with big plays.

Van Jefferson ($6,000 DS / $3,500 DK) Behind Cooper Kupp and Robert Woods, the Rams wide receiver depth chart was a little unknown coming into the season. Veteran free agent DeSean Jackson, rookie Tutu Atwell, and Jefferson were all in the running. Jefferson appears to have the role, playing more than double the snaps of Jackson, and catching a nice deep ball for a touchdown among 3 targets. He’s still at the minimum price, but of course will require another big play with the volume not quite there. A good GPP punt option.

Deebo Samuel ($10,900 DS / $6,700 DK) We saw a number of interesting developments at the 49ers in Week 1, with Trey Sermon a baffling healthy scratch, and Brandon Aiyuk slipping down the pecking order (apparently due to some hamstring discomfort). Raheem Mostert also copped a season ending injury in the first quarter. Not ideal. The guy who thrived was Deebo Samuel, who is now clearly at the top of the receiving tree and free of his own injury concerns. With a decent matchup against the Eagles, this is a rare case where I’m willing to chase last weeks points, especially with the price staying very reasonable.

Amari Cooper ($14,020 DS / $6,800 DK) Just as we saw in the first month of the 2020 season, before Dak was injured, the Cowboys were willing to throw the ball all day long to keep up, with their defence unable to slow the opposition down. That means big volume for all the pass-catchers, with Cooper and Ceedee Lamb the chief beneficiaries. They will be very popular after big scores last week, but it’s hard to imagine how this goes too far wrong for a Cowboys stack.

Stefon Diggs ($15,850 / $7,700 DK) Part of betting on Josh Allen to get his season going in the right direction, is betting on the talent of Diggs to overcome some tough defensive matchups. With the stack being a little expensive and not looking too impressive on the box score, ownership should be down. I want to take this chance to bet on the massive ceilings of both players and to look for value elsewhere in these lineups.

Darren Waller ($12,740 DS / $7,600 DK) Waller saw a ridiculous 19 targets in week 1, with his status as Derek Carrs favourite target and safety valve going to a whole new level. Part of the reason for that was that he had a bad night with his hands, only catching 10 balls. Regardless, he’s pretty cheap for a top tier player, and will be leaned on heavily again against the Steelers.

Rob Gronkowski ($8,900 DS / $4,700 DK) I’ll mention Gronk as one possible stacking option with Brady. I admit that I was sure that his days of being a dominant target were behind him, and that he would rely purely on touchdowns. He did get the two TDs last week, but also saw 8 targets and looked a big part of the game plan all over the field. Not quite vintage Gronk, but close enough.

Los Angeles Rams ($5,960 DS / $4,500 DK) The Rams looked excellent on both sides of the ball in their opening game against the Bears, as expected. With Jalen Ramsey and Aaron Donald among the best defensive players in the league, opposing quarterbacks have a tough task against the Rams. Carson Wentz gets that job this week, and he looked a little shaky in his Colts debut last weekend. If the Stafford and the Rams offence can get off to a fast start, the pressure will be high on Wentz and there could be plenty of turnover opportunities. 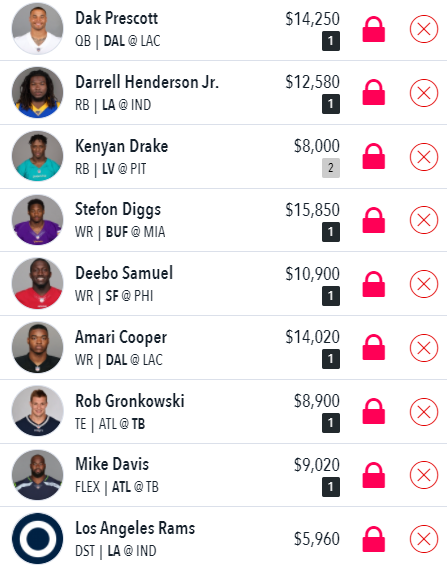 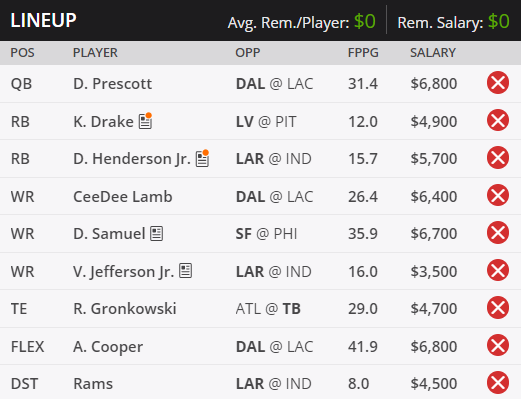