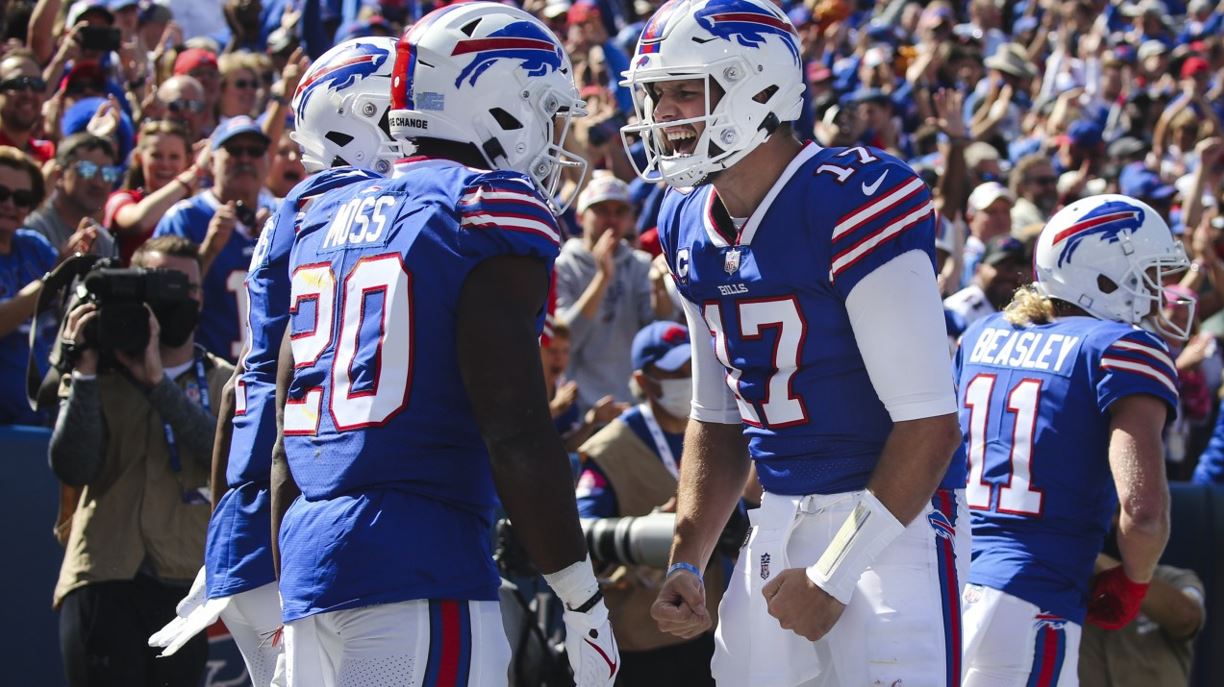 Week 3 saw some popular games producing our biggest fantasy scores, with the Bills, Chargers, Vikings and Rams producing the bulk of the best plays. Week 4 is another massive 13 game slate, with another huge $50,000 prize pool from Draftstars. The top prize is $4,935. Let’s take a look at some of the best plays.

Josh Allen ($16,800 DS $8,000 DK) After a quiet first two games, Allen exploded last week with some of the incredible form we saw in 2020 leading to 40-point game. He always has one of the biggest ceilings on the slate, thanks to a cannon of an arm and above average running ability. He’s involved in almost every touchdown, and now gets a great matchup against the lowly Texans, who the Bills should dismiss with ease. Despite the big price, I’m looking to build some stacks around Allen once again.

Jalen Hurts ($14,130 DS $6,900 DK) In Week 3 we got a bit of a reminder that Hurts is still effectively a rookie QB, as he made a number of big errors and generally struggled when beaten comfortably by the Cowboys. The encouraging part is that he still managed to score 25 points and continues to prove on of the safest fantasy plays at the QB position due to his elite rushing. Week 4 brings the Chiefs, one of the highest total games on the slate, and another opportunity to put together a big score no matter the result as the Eagles try to keep up with the potent Chiefs offence. Of course, stacking the Chiefs side of that game is also very viable, and Hurts is one of the few quarterbacks that can be played naked (without any teammates stacked beside him).

David Montgomery ($13,160 DS $5,800 DK) Montgomery has been priced up a little this week in anticipation of an easy matchup with the Lions, but it’s not quite enough to scare me off him. He’s yet to really get going in 2021, but we saw what he’s capable of when closing the 2020 season with 6 straight 20+ scores. The bears do have a question mark over who will play QB this week, and how they will perform, but I think that is all the more reason for the team to lean on Montgomery. If they can get off to a fast start, he will be pounding the ball up the middle often.

Derrick Henry ($15,970 DS $8,800 DK) Another price rise sees Henry finally around the point where we have to make a decision about whether he’s worth it or not. A gentle matchup with the Giants, combined with his massive ceiling, has me thinking that he’s still clearly the best pay up option on the board. Adding fuel to the fire is the injuries to both A.J. Brown and Julio Jones, meaning the Titans almost have no other option but to lean heavily on Henry to try to get on top in this game. Of course, that also means the Jets can put extra attention in his direction, but good luck trying to stop the big dog!

Zack Moss ($8,590 DS $5,300 DK) Our value option on the slate looks to be Moss, who started the season with a healthy scratch but has quickly moved into the bigger role of the Bills running backs. After a strong performance last week, he should be able to take advantage of the Texans and do some damage in the end zone, which is too hard to ignore at minimum price. He can also be stacked with Allen, as we saw last week when he caught a touchdown pass.

Brandin Cooks ($11,660 DS $6,400 DK) Cooks presents as a potentially underrated bring back option against my preferred Bills stack. The concern is that rookie QB Davis Mills looks fairly limited and could have a tough day, but as we saw last week he’s likely to deal with the pressure by locking onto his favourite target straight away and getting the ball out quickly. That should mean another week of substantial volume for Cooks, and he’s definitely cheap enough if he can repeat the low 20’s scores he’s had in all 3 games so far. Teammate Anthony Miller also showed signs of life last week and is still at minimum price. He’s a big risk, but worth considering.

Tyreek Hill ($15,990 DS $8,000 DK) Despite consecutive quiet games, Hill is my pick of the more expensive WRs, and makes for a great bring back against Hurts. The Eagles are not a great defensive outfit, and the Chiefs need to get things back on track after consecutive losses. There has been minor concern that Hill is playing injured, but I’m not buying it and think is a good time to pounce on one of the highest ceiling players on the slate while the field is a little unsure.

Deebo Samuel ($12,380 DS $6,500 DK) The dynamic 49er has clearly been the teams preferred target, with 30 targets in 3 weeks. In week 1 that was converted to a massive 35 points, but some tougher matchups have kept things a little tighter since. The Seahawks matchup profiles as a potential shootout, with receivers capable of having big days against a middling defence. With his price dropping enough to have some value, I’m keen to keep investing in someone with a clear ceiling.

Noah Fant ($8,440 DS $4,300 DK) It’s been a middling start to the season for the athletic Broncos tight end, as he looks to develop chemistry with new quarterback Teddy Bridgewater. After another teammate went down with injury last week in the form of K.J.Hamler, the team will need to lean on Fant a little more heavily in Week 4. The Ravens are a team that is struggling to stop the pass, so I don’t consider the matchup particularly difficult. With some of the popular TE’s a little expensive for my taste, I think Fant strikes a nice balance between upside and dependable production at a reasonable price.

Dallas Goedert ($6,500 DS $4,800 DK / Zach Ertz $6,470 DS $3,500 DK) With a group of talented but inexperienced wide receivers at the Eagles, I’m more comfortable looking to these two experienced tight ends as stacking partners for Hurts. The trick is figuring out which one is going to get the valuable targets this week, but I’ll leave that to you. A good game environment makes me confident that one of them will be viable, especially after Ertz looked to come back to life last week when he saw 7 targets and a touchdown, following 10 straight single figure fantasy scores.

Washington Football Team ($5,560 DS $3,500 DK) 2021 has been a very different season for the Washington team, with the DST struggling to stop opposition units and apply pressure like it did in 2020. Still considered one of the most talented groups in the NFL, it’s only a matter of time before they turn things around. A matchup with the Falcons, who feature one of the oldest and most immobile QBs in Matt Ryan, it looks like a strong opportunity to cause some havoc. With a middling price, I think this is another opportunity to invest in a play that the field is going to feeling uncertain about. 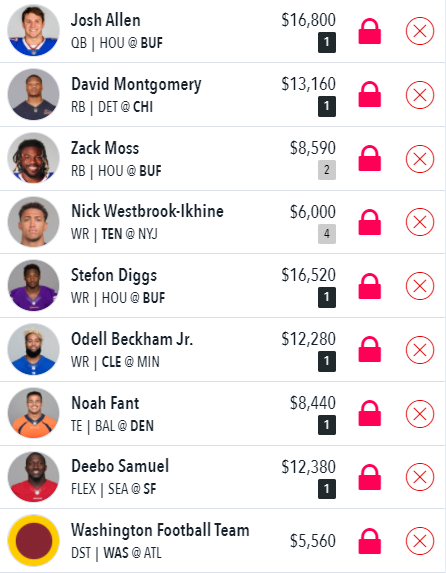 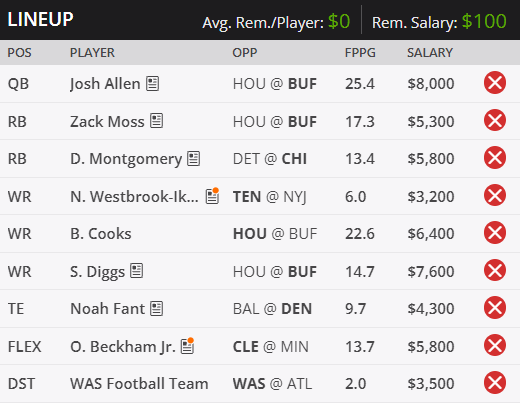