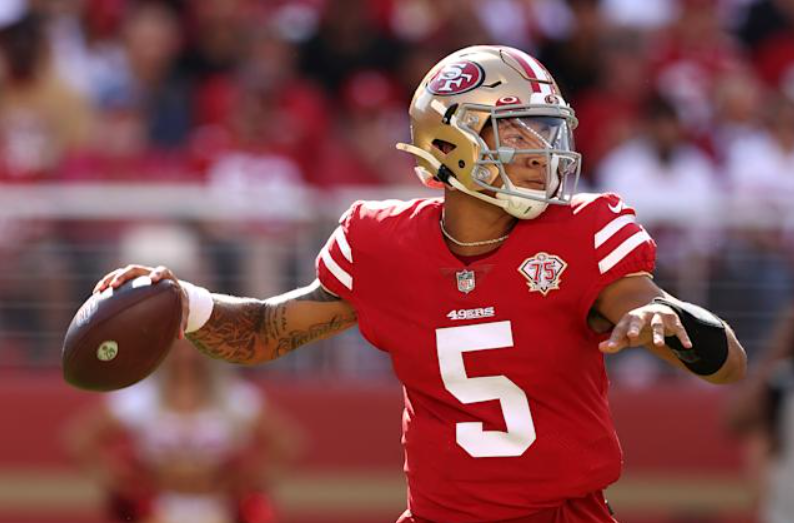 Week 5 is a week where injuries have started to bite hard, and we are getting some value opportunities on replacement players and those returning from injury. Draftstars has yet again stumped up a massive $50,000 prize pool with $4,935 to first place. Things get underway at 4am AEDT Monday morning, with a 12-game slate given that there is one early game in London this week not on the main slate. Let’s get into it.

Trey Lance ($11,940 DS $5,700 DK) Our first injury beneficiary, rookie QB Lance got to play half a game last week after Jimmy Garropolo went down. He scored an amazing 20 points in that half, although a lot of those points come from one long Deebo Samuel TD on a busted coverage. Regardless, with a week to prepare as the starter, Lance is in a fantastic position. He’s a true dual-threat quarterback, not too dissimilar to opposition QB Kyler Murray. The Cardinals are the hottest team in the NFL, so it’s likely that Lance and the 49ers have to play catchup for much of the game. At a middling price, invest early before he moves a lot closer to the likes of Murray on the pricing board.

Ryan Tannehill ($13,850 DS $6,400 DK) A little less obvious, Tannehill and his Titans have been living in the fantasy purgatory of middling performances. Contributing factors include some tough opponents, injuries to key players, and getting used to life under new offensive coordinator Todd Downing. Some of those factors are improving this week, with a gentle matchup against the winless Jaguars, and the return of stud receiver A.J. Brown. It sets up as a decent spot to invest in some Tannehill stacks at low ownership, and hope that we see something closer to the ceiling scores that were not uncommon in 2020. The fact that part of the game plan now includes throwing the ball to Derrick Henry only makes a Titans stack more viable.

Leonard Fournette ($11,700 DS $5,200 DK) One of my favourite running back matchups to target is the Dolphins, and Fournette is this week’s beneficiary. We’ve seen Fournette continue to own the Bucs backfield, as he did in the 2020 playoffs. Ronald Jones continues to fumble his way into Bruce Arians doghouse, and Gio Bernard is injured. We’ve yet to see anything approaching a ceiling game from Fournette, but with the Dolphins struggling this game sets up perfectly for him. At the same price Damien Williams is another intriguing option after David Montgomery was injured last week, but I slightly prefer Fournette.

Derrick Henry ($18,140 DS $9,000 DK) I will likely continue to write up Henry every single week, despite the price finally catching up to the output. The reason I can’t look away is that most of the other expensive running backs have big question marks due to injury, team performance, or matchup. No such issue for Henry, who continues to be unstoppable, and should have plenty of opportunities against the Jaguars. As above, if pairing with Tannehill we have to hope that he manages to score at least one of his touchdowns on a reception rather than a run.

Joe Mixon ($8,000 DS $6,200 DK) It’s unclear at this point if Mixon will play, but if he does then his minimum price will be a major error. Given he is yet to practice this week, it may be unlikely, but I have to mention it just in case. A matchup with the Packers is not overly difficult for running backs, which would be helpful if he plays but doesn’t get a full workload. Chuba Hubbard could be a cheap alternative if Christian McCaffery misses again. Check in on Sunday where we can provide an update.

DJ Moore ($14,210 DS $7,500 DK) One of the best stories of the season so far is the performance of the Panthers under new QB Sam Darnold. Darnold badly needed a new home after 3 tumultuous years at the Jets, and the Panthers badly needed a QB they could trust long term. So far, it’s been a great pairing, and the team is looking solid all-round with the receiving group and DST both able to thrive under the conditions. Top of the pile is Moore, who is thriving in his fourth season, already scoring 3 touchdowns after never exceeding 4 in any of his previous seasons. I expect the breakout to continue in a soft matchup with the Eagles and prefer him to everyone else above the 13K mark.

A.J. Brown ($12,780 DS $6,500 DK) This may be risky with Brown coming back from a hamstring injury, but if he is anywhere near 100% we know how devastating he can be. The gentle Jaguars matchup, paired with likely low ownership after a slow start to the season and a reduced price makes this a risk worth taking. Especially keen to pair him with Tannehill, but I also like the play as a one-off.

Darnell Mooney ($8,640 DS $4,700 DK) You wouldn’t know it from looking at fantasy scores, but Justin Fields was excellent last week in his second start. Despite not accounting for any touchdowns, he threw the ball aggressively and accurately downfield, before the running backs took the scores. Mooney was the biggest beneficiary of the improved play, hauling in 5 catches for 125 yards. The Raiders are a beatable matchup, and I’m keen to invest in the chemistry on show from young guns Mooney and Fields before the price and ownership respond in the coming weeks.

Jonnu Smith ($7,430 DS $3,300 DK) Tight end continues to be a frustrating position, with limited viable plays and the best option often being a random guy that catches two touchdowns. With limited interest in any of the top options, I’m going to take a shot at Smith in the easiest matchup available right now. He’s yet to hit any of his previous heights at his new team, but this is the best chance to get on the same page as rookie QB Mac Jones so far. It would likely only take one touchdown to make him viable, while the same applies to teammate Hunter Henry.

Mike Gesicki ($7,550 DS $4,200 DK) At the same price, I’ve liked what I’ve seen from Gesicki in the two weeks with Jacob Brissett at QB. Brissett seems to be looking to Gesicki very often as a safety valve when the play is breaking down. The matchup with the Bucs is tough on paper, but it will likely demand that the Dolphins throw the ball early and often, as you simply cannot run against the Bucs. Strong volume paired with a random TD would be plenty.

New England Patriots ($8,010 DS $4,900 DK) If I learned one thing last week, it’s that we need to pay whatever it takes to get the defensive matchup with the Texans whenever Davis Mills is at QB. He was a sitting duck against the Bills as they racked up 22 fantasy points, and the Patriots have the same opportunity. If that happens, $8K will look far too cheap despite being the highest price on the board. 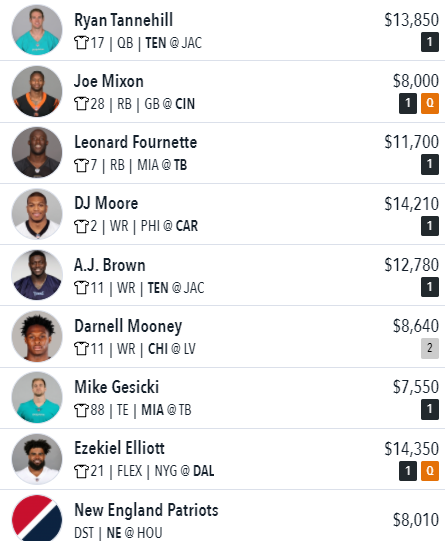 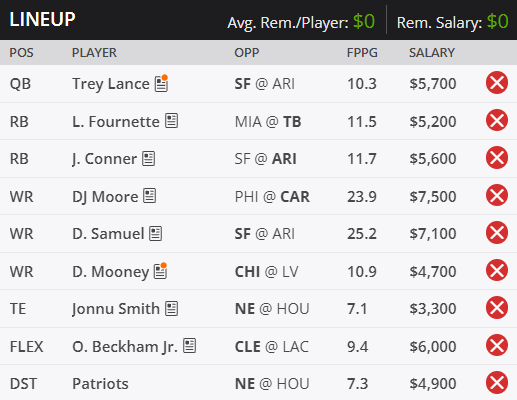