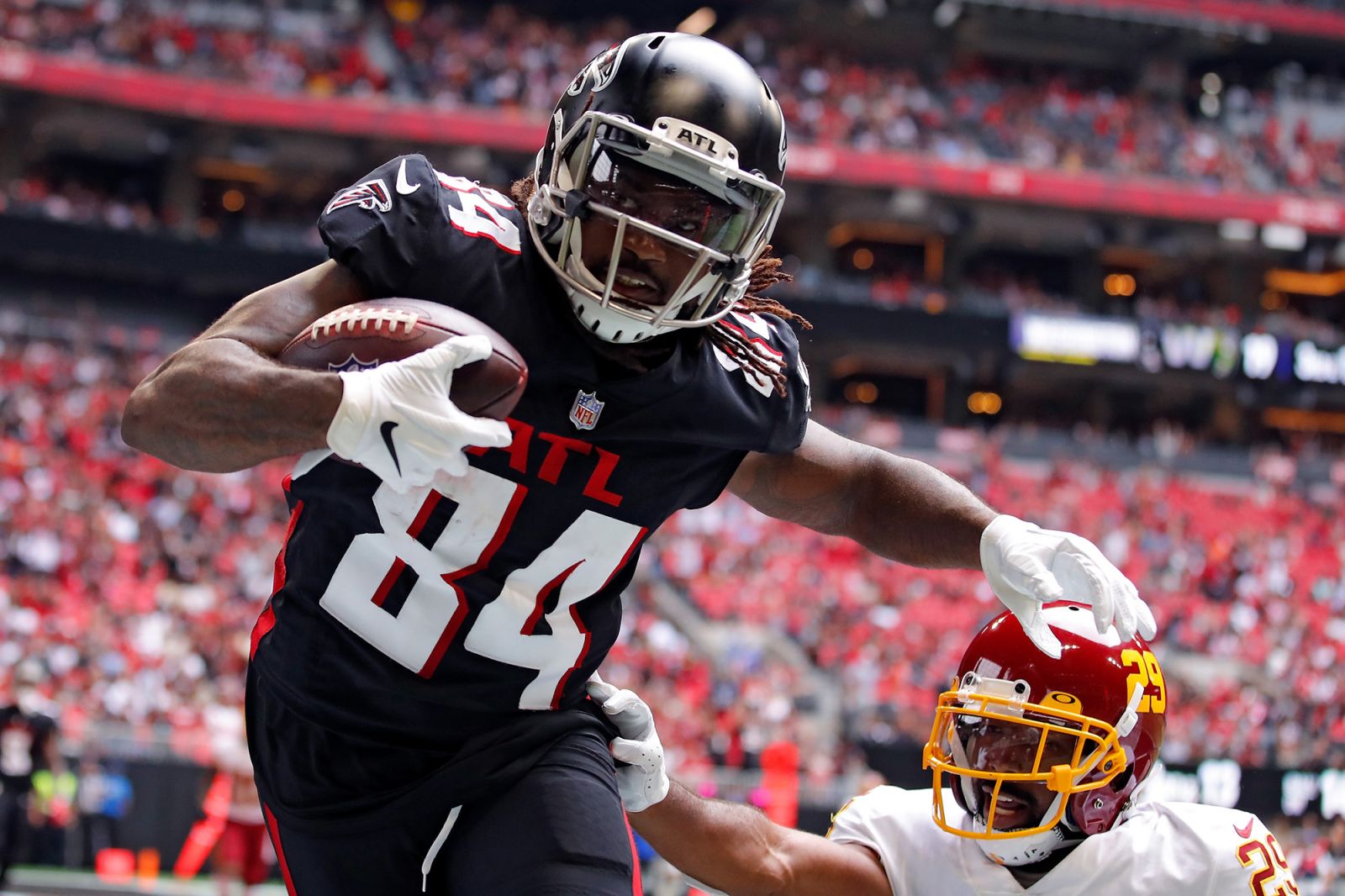 Welcome to week 7, where byes and injuries reach a new high in their impact on fantasy football. Despite 6 teams taking the week off we still have a 10-game slate. Draftstars has kept the main contest at $40,000, with a top prize of $3,915. I have to say there are a lot of interesting games on the slate, to the point where I feel like I could write up 10 different quarterbacks at least. Let’s get into it.

Picking one of the top quarterbacks is difficult on this slate, but I’ve settled for Lamar thanks to a massive ceiling, a good matchup with the Bengals, and a bounce back opportunity after a quieter game against the Chargers last week. The Bengals are going just well enough to keep up and make a game of this. Of course, the likes of Mahomes, Stafford, Brady, Murray & Hurts are also in appealing spots and are perfectly fine choices also.

Cheaper QBs are a little harder to like on this slate, and Darnold has everyone worried after a hot first month followed by two pretty bad games. The team has gone from 3-0 to 3-3, but now have the opportunity to get the show back not he road against the struggling Giants. I think we can get Darnold at next to no ownership, which is enough for me to take the risk on him this week.

I almost gave this spot to Darrell Henderson, before giving myself a slap in the face when I realised that Henry was less than $1500 more expensive and has a far superior ceiling. The matchup with the Chiefs is excellent for running backs, and Henry just never looks like letting us down. The repeat of week 1 when he scored 10 points will come eventually, but I don’t think it’s this week.

At this point it’s clear that we can trust Patterson to continue in his hybrid role, and that is great for fantasy. Catching 5+ passes every week as well as getting a chunk of rushing work is gold in this scoring format, and a matchup with the struggling Dolphins is welcome.

I’m not overly excited about this play with Kenyan Drake looking like he’s starting to earn a role now that John Gruden is gone, but that does give me an opportunity to write up both Raiders RBs. Jacobs is too cheap on his historical output and has a solid floor at this price of 10+ points, but his ceiling may be lower now than in previous seasons. Drake is at the minimum price, and showed 20+ upside last week when scoring 2 touchdowns. Neither fills me with confidence, but there are no cheap RBs who do.

The clear stacking partner for Darnold, Moore has mirrored his QB by having a couple quiet weeks after the hot start to the season. The price has come down accordingly, and the ownership should follow. I like this opportunity for a young stud to have a big bounce back in a nice matchup and show us another glimpse of the improved 30+ point ceiling.

Hollywood Brown is enjoying 2021 for the most part, with 4/6 scores of 19+, including one 36-point monster. The thing is, he’s left a couple of monster scores out there by dropping monster TD passes on a few occasions. The way the Ravens are playing with their creative run game is allowing them to open up the field for Lamar Jackson to unleash regular deep balls, and Brown is profiting. The price is still low enough for me to want to keep chasing those big plays in good matchups.

This one is a bit gross, but I’m a sucker for a steady veteran at minimum price. Crowder missed the first few games, but on his return deemed to settle into his usual slot role. One good week and one mediocre is all we have to go off, but I like the chances of rookie Zach Wilson leaning on Crowder for easy completions in the middle of the field. After a bye week to work on their chemistry and find a game plan to make life easier for their young signal caller, I think Crowder represents a safe(ish) salary saving option.

Travis Kelce is too expensive this week, and while I’m open to the likes of Andrews and Waller, I’m looking below 10k for most of my TEs this week. I continue to like Higbee despite the nice role only being converted into a bunch of middling scores so far. Last week he was cut down short of the end zone on multiple occasions, and I just know that big 20+ week is coming soon. A pancake matchup with the Lions is as good of an opportunity as any, so let’s try again.

Now for a very cheap veteran who has just moved teams to the Cardinals. Another pancake matchup with the Texans is a great start, and I think the Kyler Murray will enjoy having Ertz as another option in the redzone. Hopefully the pair can get on the same page straight away and rack up the 15+ score that would do the job easily at the TE position.

As usual, picking a DST is almost an impossible task, so I’ve settled for the combination of cheap, lowest total game on the slate, and playing against a rookie QB. The Patriots would satisfy 2/3 constraints on the other side of this game, but I like the Jets as an underrated unit going against Mac Jones, who has mixed some impressive outings with some error-prone games. The top score of 7 so far this season by Jets DST isn’t great, but beggars can’t be choosers. 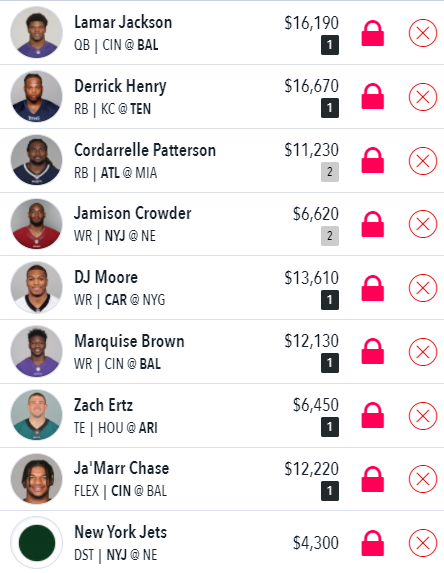 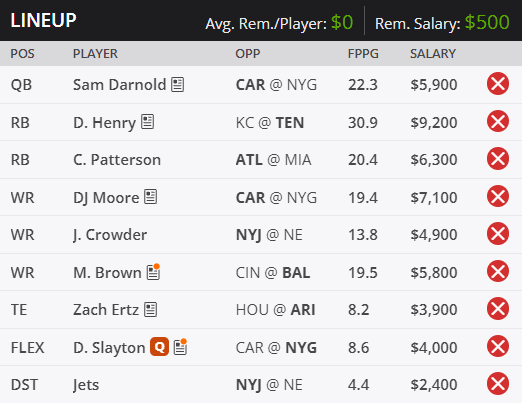