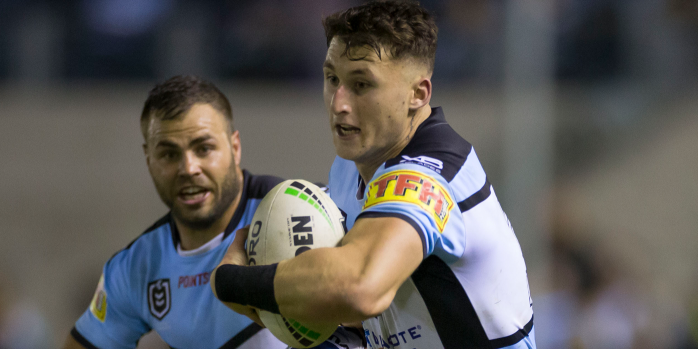 Round 14 of the NRL kicks off on Thursday night with one of the biggest games of the round, when the Canberra Raiders play hosts to the Cronulla Sharks.

The Raiders won 6 of their opening 8 games to climb up to third place on the ladder, before going down to the Roosters by 6, Souths by 4 and the Cowboys by 6. After struggling to a 12-10 victory over the last placed Bulldogs, the Raiders had a much more convincing 28-0 win over the Wests Tigers last weekend.

The Sharks have been impressive this year considering their tumultuous off-season and huge injury toll, to be sitting in 6th place. They’ve won 5 of their last 7 games, including impressive victories over Melbourne in Round 8, the Dragons in Round 11 and last weekend’s 42-22 win over the Eels.

The Raiders are the narrow favourites, however the Sharks have won their last 6 games against the Raiders down in Canberra.

The team at MoneyBall have a major contest for this game with a total of $5,000 in prize money on the line and a $15 buy-in. DraftStars also has a major contest worth $5,000 with a $15 entry fee. Both sites also have a number of smaller contests available so as to cater to players of all budgets and skill level.

If this is your first time playing Fantasy NRL, make sure you have a look at our quick guide to help you understand how the game is played. Check it out here.

The Sharks front rower is a consistently high scorer. At DraftStars he’s got an average of 58.7 for the season and a 3 game average of 65.4, while over at MoneyBall he’s averaging 40.1 and 45.9 over his last 3 matches. He consistently makes big metres and plenty of tackles, which isn’t likely to change here, as these sides have big packs and will be trying to outmuscle each other in the middle.

The Sharks rookie centre is in some red-hot form right now, having scored 6 tries in his last 3 games. His last two games has seen him produce his two highest scores of the season, a 62.5 and a 73. The Raiders backline is a little disjointed with a few positional shuffles taking place on Xerri’s side of the field, which is good news for the Sharks speedster.

Rapana made his return last weekend after sitting out for a month with injury. He scored himself a try in his first game back and will be better for the run. He has a season average of 26.4 at DraftStars and 23.5 at MoneyBall, making him brilliant value for money in any side.

Blyake Brailey is a backup hooker for the Sharks and comes with a rather high price tag, particularly at DraftStars considering his season average of 17.6. Last week he was a late omission from the Sharks bench, making way for the returning Wade Graham. He’s not just over-priced, but also a high risk of being dropped from the starting 17.