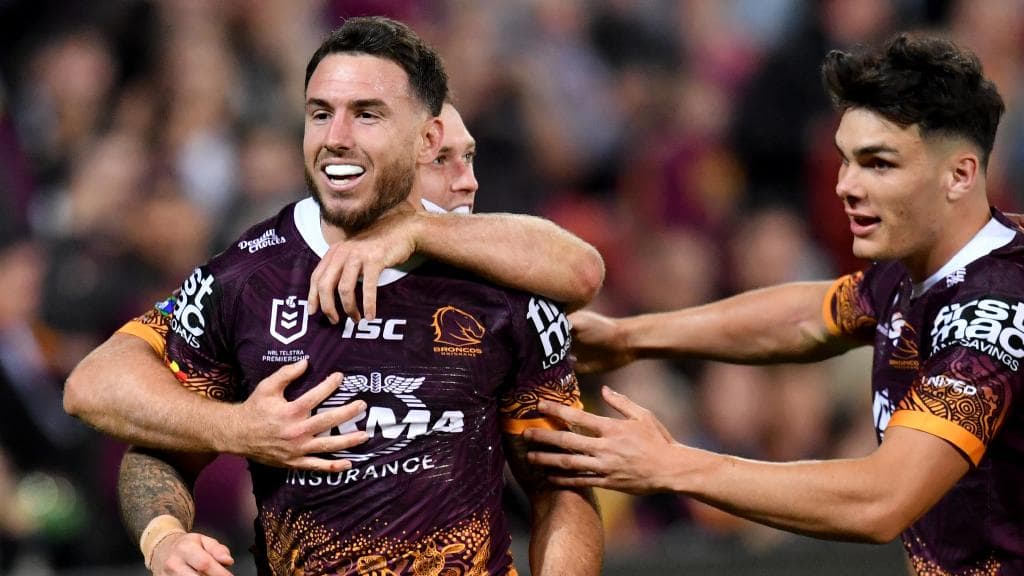 If last week’s State of Origin finish didn’t have you on the edge of your seat, an epic 5-setter between tennis’s best and a controversial cricket World Cup finish went that extra bit further. But with all that done and dusted, we revert back to that little old friend of ours, with the Brisbane Broncos hosting the Canterbury Bulldogs in Thursday night footy.

There is heaps of prize money up for grabs with Draftstars putting up a massive $10,000 for the return to Thursday, while Moneyball will have a guaranteed $4,000 on offer to go along with $2k and $3k slates across both platforms for the remainder of the weekend. Let’s break down Thursday’s Broncos v Bulldogs clash as we gear up to an exciting weekend of rugby league on Moneyball and Draftstars.

In a contest that at the start of the season would have shaped up as just about two points for the home side, the Broncos have been well below average and look hardly a guarantee with a line-up that hardly resembles how they started the season. The Bulldogs on the other hand are dealing with their own injury concerns, but will be buoyed by back to back wins against the top eight Sharks and Knights. Betting has opened up with the Broncos as clear favourites, giving the Bulldogs an 8-point head start, and while that may come at a shock to some, it is very much expected.  While the Broncos welcome back Corey Oates ($7,300 MB, $8,490 DS), the loss of Aiden Tolman and Sauaso Sue will see Ofahiki Ogden ($4,700 MB, $8,620 DS) and Adam Elliott ($6,400 MB, $11,180 DS) join the starting side.

While there are plenty of ways to approach this match-up, finding the right mix of high value and high scoring players will go a long way to finding success on the fantasy landscape. While the Broncos hold the advantage in both betting and from a fantasy stand-point, don’t be shocked if their 2019 ‘rocks and diamonds’ like attitude see’s the Bulldogs gain the edge here. Both sides are far from good when it comes to conceding points and with that in-mind, don’t be surprised by anything here. With most NRL early line-ups, changes are hard to combat so far out. With the absence of a few through injury, should there be any additional changes to the line-up, tread carefully if following the cheat sheet.

Brisbane made a big call signing this baby giant on a huge deal and despite their poor season, it is paying off well with the young prop proving the Broncos best this year, ultimately earning him a spot in the blues origin squad. Coach Seibold likes to play both Haas and Lodge on big minutes, and that doesn’t look to change as the Broncos look to make a late finals tilt. Expect Haas to score well once again as he looks to take on an in-experienced Bulldogs side and despite his huge salary, only your big kahunas or cap space will see him missing in most sides.

With the huge loss of captain Tolman out of the side, coach Pay will call on his main chargers to shoulder the work load and coming in at a rather handy salary, the rather interestingly named Ofahiki gets first crack to impress. Having scored well when starting in the front row previously, expect that to only improve, especially given there are only three genuine forwards on the bench. While a case can be made for the likes of both Elliott and Napa to also go big, Ogden represents the best value in this contest, especially if you are trying to squeeze Haas in there also.

After a couple of solid performances in the halves, former back-up hooker Turpin has managed to lock himself into the side alongside Boyd and it is paying wonders to his scoring. With Boyd not a notable kicker, Turpin shares the duties with Milford and McCullough, to go along with his tireless work rate in defence. On base stats alone, Turpin represents significant value and although I have been reluctant to include him in my line-ups previously, I expect to see him well found come Thursday night.

Normally one of the most reliable hookers in the competition, the recent addition of Turpin and Segeyaro to the Broncos squad has cast serious concern for former origin rake McCullough, with his minutes continuing to drop in recent weeks. While Turpin plies his trade in the halves for the time being, Segeyaro plays an integral role towards the back-end of games, which all but guarantees the end of the night for McCullough. While his salary is significantly reduced, there is next to go ceiling in selecting a hooker that is unlikely to play out the full game.

With the Bulldogs choosing young Brandon Wakeham in the halves once again, the much dearer Marshall-King is forced to come off the bench once again. Despite all that, his salary comes in rather large and as a result, you can just about put a line through him in line-ups this week. Much like Segeyaro, he can pose a threat off the bench, and although the Dogs are going through a rich vein of form in recent times, should an unlikely late change see him move into the starting side, then he does pose as a genuine selection.

Looking somewhat vintage Raiders Milford, the man they call Tony relished his opportunity at the back, amassing plenty of points off the back of 11 tackle breaks and 580 kicking metres as the lead kicking role last week. This week he comes in at a salary equivalent, but it would be very unlikely for him to keep that sort of form up, despite the fact they are playing the Bulldogs. By all means he could come out replicate that sort of performance, throwing in a try for good measure, but there is plenty of value elsewhere and I will be taking on Milford to put in a sub-par effort.