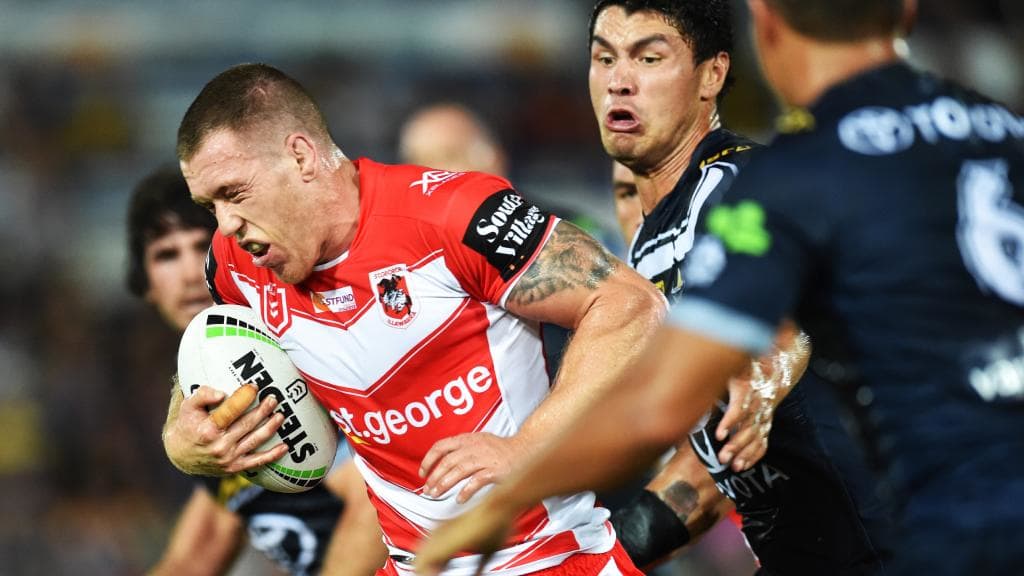 The Easter bunny has come and gone and upon us is an action-packed weekend headlined by one of the most exciting yet emotional games of the season. Thursday holds such significance on the Australian and New Zealand calendar, and for the NRL it all caps off with the Roosters and Dragons to duel it out in an Anzac Day blockbuster. There is plenty of prize money up for grabs with Draftstars putting up $3,000 and $2,000 Guaranteed pools for games throughout round 7. MoneyBall have put up $4,000 GPP for both the Anzac Day clash and Friday’s match between the Panthers and Rabbitohs. Meanwhile, PlayON have put up a $2,500 prize pool for their much anticipated Anzac Day contest. After fronting Anzac Day dawn services and marches, many will flock to RSL’s, clubs and pubs looking to share a beer or two with the veterans, before another rendition between the Roosters and Dragons. So let’s have an in-depth look at the clash along with some other key players to look out for this weekend.

In a contest that shapes up as an absolute blockbuster, the Roosters will look to continue their run for back-to-back premierships when they take on a resurgent Dragons side that has strung four wins on the trot. While the Dragons could quite easily have just the one win to their name, they have found a way, despite being without some of their keys stars. The Roosters on the hand have overcome a round 1 hic-cup to prove a dominant force in the competition, with last week’s win against the previously undefeated Melbourne Storm, showing just how good they can be. While the Roosters welcome back Jake Friend ($14,900 DS), Siosiua Taukeiaho ($13,790 DS) and Joseph Manu ($9,000 DS), the loss of Luke Keary will require Cooper Cronk ($11,380 DS) to be at his best.

When looking at both sides and how they concede points, the Roosters are one of the best when it comes to conceding points in the backline, while they tend to concede heavily through the forwards. Although the Dragons are rather even across the board, both sides maintain positive differentials throughout most matches. While it is hard to pin-point the reason behind the stark contrast in conceding points from different positions, the Roosters are likely to enjoy more of the possession given their dominance in betting, allowing the Dragons forwards to benefit regardless.

Looking at this clash, the Roosters go in as heavy favourites and rightfully so, given they were able to take down an undefeated Storm in Melbourne with plenty of talent sitting on the sidelines. The return of Friend will be huge as the Roosters move up the field, it also takes pressure of hard hitting Radley as he returns to his role at lock. Manu also returns to the backline in a huge plus, but the loss of Keary is significant. The Dragons have been solid after what was a disappointing start to the season and have named the same line-up that controversially beat the Sea Eagles last week. Although I am confident they can keep it close for the majority of the match, ultimately the Roosters should come away with the win. Sportsbet have $3.00 on offer for the Roosters to win this one by less than 13.

While there are plenty of ways to approach this match-up, line-ups built with successful dependent combinations will dominate the top-end of the leaderboard in a case of risk verse reward. While both sides are quite even when it comes to fantasy scoring, don’t be surprised if those claiming the big cash are heavily stacked towards one team or another. My advice would be to have an opinion and build your side around that, in turn, allowing you to create a point of difference with your opponents. With most NRL early line-ups, changes are hard to combat so far out. With the return of Friend and Taukeiaho from injury, to go along with a few positional changes, should there be significant changes to the line-up, tread carefully if following the cheat sheet.

While the loss of Luke Keary is a huge loss to the Roosters, the shift of Latrell Mitchell into the halves is a significant boost to the value of Cronk. The retired Origin half has been rock solid since returning from injury and will be heavily relied as the Roosters look to convert attack into points, allowing him to accumulate maximum points through kick metres and assists. Despite leaving the field early against the Broncos, Cronk continues to average 44.3 DS points this season and that is expected to rise through Keary’s absence. While a case can be made that Hunt is a much better option given his ceiling, Cronk

After a couple of mediocre fantasy performances, Tedesco’s salary has taken a slight dip despite still proving such a dominant force on the field. In saying that, he is still currently averaging 44.0 DS points with a ceiling of 80.7 for the season to go along with 104.9 from last year. When looking at how both sides compare, there appears to be a huge class difference at the back, with Tedesco likely to prove the difference between the two sides. Outside of Latrell Mitchell, there is no player that comes within +10.3 points based on projections, with those choosing not to go with the Origin fullback taking a huge gamble.

While you can’t have both Cronk and Hunt, if there is room in the budget and the Dragons are to be a chance at winning, Hunt is the man you want in your line-up. In outstanding form in recent times along with his performances against the Roosters last year, Hunt is averaging 58.5 this year with a floor at an outstanding 42.7. Taking on a more significant role with kicking since Widdop was moved to fullback, along with a heavier workload in defence, it is safe to say that Hunt is likely to maintain those sorts of numbers leading into Origin.

Although coming in at a rather large salary, McInnes is safe as houses in the hooking role with predicted score +8.2 above the next closest player. Although Friend comes in much cheaper than previous weeks, there is concern as to whether he will play out the match, especially considering they have named Lachlan Lam on the bench. Given he scores well from base stats, McInnes should benefit from the added defence the Dragons will most likely encounter. Although those that choose to go with Friend or even Radley at the hooker position could be well rewarded, McInnes is a much safer option if there is room in the budget.

While Sims has been rather underwhelming of late, the Origin backrower is certainly capable of much more and tends to rise to the occasion in big matches. With five scores greater than 60 last year and a 60.6 in round 2 against the Rabbitohs, the sub $10k price tag is more than reasonable for the risk you take on board. While Sims has been quiet of late, he has scored predominantly from base stats while conceding heavily through penalties and missed tackles. I expect him to get up for this Anzac Day clash and ultimately, he could prove a massive point of difference if you are successful.

Crichton goes into the list based on his ability to provide a heavy presence both in attack and in defence. Big hits one minute, line breaks the next, Crichton has really started to settle down in the Roosters back row as he ramps up his performance to take care of the vacant Origin back row spot left by De Belin. Averaging 50.7 since starting for the Roosters, there isn’t any more versatile player in this match than Crichton and regardless of who has a stranglehold on possession, expect the former Rabbitoh to make his presence felt. Far away the Rabbitohs best player when playing the Dragons last year, don’t expect much to change as he gears up for his first Anzac Day clash. 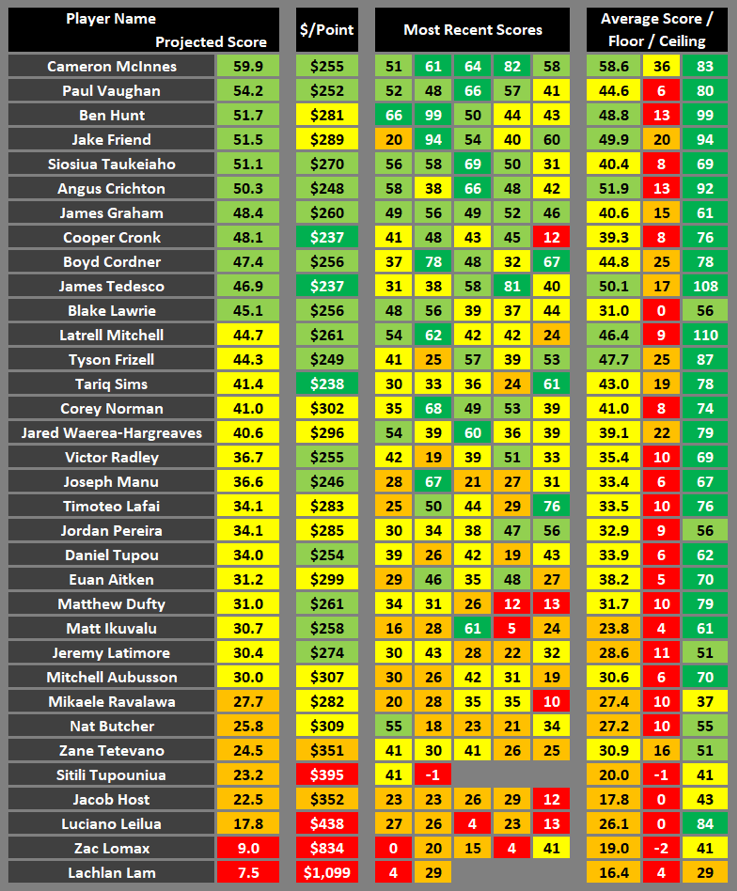 After only just the one game last year, Aekins returns to the fullback position after yet another disappointing performance from the Panthers who are in desperate need for victory. In his debut match, the Panthers went down to the Sharks, but it was Caleb Aekins who shone bright with an impressive 53.3 DS points off the back of 303 running metres and 7 tackle breaks. Despite being relegated back to lower grade footy, he didn’t miss a beat, being name the Intrust Super Premiership player of the year. It’s obvious he has big shoes to fill if he is replicate his debut numbers, but at an absolute bargain, he could be a popular option in most line-ups.

After a colossal 73.7 DS points on debut, mobile backrower Scott Sorensen put himself on notice as a player to watch. Despite only managing two other scores over 50, Sorensen has found himself fighting for positions from the bench with the inclusion of Briton Nikora, Kurt Capewell and Jack Williams in recent times. Despite averaging a mere 29.2 since arriving on the scene, when handed the starting duties in the back row, Sorensen has averaged a much larger 40.3. While an 80 minute performance is not guaranteed with Bukuya and Williams on the bench, Sorenesen represents great value for those more accustomed to including Nikora in their line-ups.

In what has been a rather mediocre start to the season, Watson bounced back with a solid 42.0 points in his first game back in the halves. Despite failing to put boot to ball in what was a rather disappointing performance from the Knights against an under-strength Titans side, Watson found himself busy with 28 tackles and 3 tackle breaks. Heavily relied upon with injuries to the Knights line-up in 2018, Watson was able to post 4 scores over 65 while average 41.6 DS points throughout the season. Whether he can re-capture those sort of numbers or not, Watson will face a resurgent Parramatta Eels line-up as an absolute bargain.