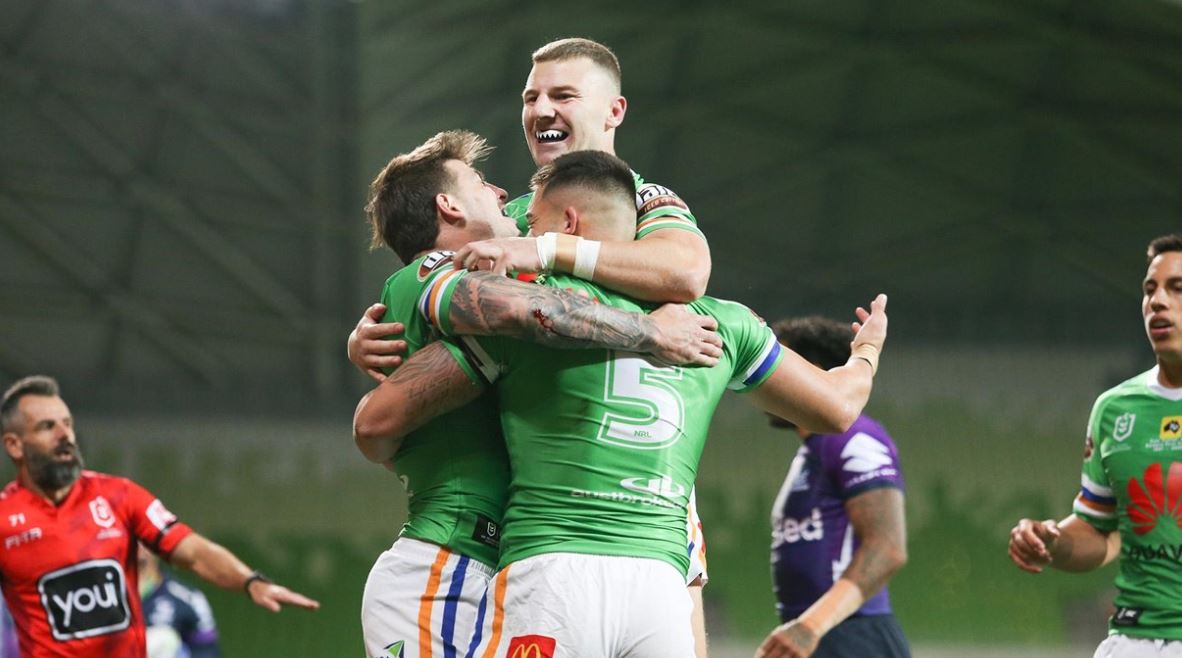 Widely regarded as the best footy you will see all season, we have reached the Preliminary finals of the 2020 NRL season. It starts on Friday night with a replay of the 2019 Qualifying final between the Canberra Raiders and Melbourne Storm. For those who cannot recall, the Raiders caused a huge boilover knocking off the Storm in Melbourne 12-10. Circumstances are different in 2020 where the Storm are based in Queensland and have enjoyed a relatively painless campaign into 2nd spot. The Raiders have only lost 1 game since round 14 but had to do it the hard way winning both of their finals so far to get a shot at the Storm.

Cracker of day in Brisbane - no issues for this match at night.

Despite hobbling off with a knee injury against the Eels, Cameron Munster has been named for the Storm with only Tom Eisenhuth coming onto the bench to replace Chris Lewis. Dale Finucane is on track to make the final 17 for the Storm by overcoming a calf injury. The Raiders are unchanged after disposing of the Roosters in a thrilling match last week. However keep an eye out on team lists prior to kick-off as coach Ricky Stuart likes to mix up his starting forwards.

One angle that I will go with for this weekend, tries are going to be hard to come by. No prelim final has gone over 30 points in the past 2 years as desperate defences take hold. I can’t see the Raiders flopping over and being overrun unlike other clubs this finals series. Points will be at a premium!

WFB: Probably the toughest position to select as players' floors and ceilings are on both sides of the scale. If you believe in the Storm winning then wingers Josh Addo-Carr and Suliasi Vinivalu are your priority. Full back Ryan Papenhuysen will need an absolute cracker of a match to pay off that $13,520 salary. He does not have that super ceiling that a Tedesco/Ponga has. For the Raiders, Charnze Nicoll-Klokstad busted out for 270+ run meters against the Roosters which was a season high. Will however find this a bit tougher but he does have tackle break upside. As alluded to last week, the Raiders send their attack to the right and Nick Cotric is always in play.

CTR: All four are pretty safe options in this position here with Jordan Rapana the more popular choice being the cheapest in this spot. It is rare for Rapana to record zero tackle breaks so I can see him going higher than his 35FP effort last week. If you are leaning for a Storm stack then you can pair Justin Olam with Addo-Carr and Brenko Lee with Vinivalu.

HALF: Two fantastic ball running five-eights and two crafty half-backs. Wish I could play them all (well you should spread the ownership if you are mass entering) but the allure of the cheaper George Williams will draw the single entrants. Williams' scores have been boosted by tries (3 in his last 2 matches) but you can get a leg up on the field if you go elsewhere. In their previous meeting in May, Cameron Munster had a monster game scoring 72FP on the back of 170 run meters and 9 tackle breaks. The big concern however, has Munster overcome his dodgy knee in time? You cannot deny the form and ability of Jack Wighton, with 3 out of the past 4 scores over 74FP+ and is still affordable at $15,630. His game is built for fantasy and if you have the salary then get him in. Jahrome Hughes is always low owned but don’t sleep on him. If Munster is underdone, Hughes will take over for the Storm in the kick game and his underrated run game.

2RF: Interesting set of salaries for this one. A set of players that are under $10,000 and the four premium options over 13K. There is an allure to roster the likes of Elliot Whitehead, Felise Kaufusi and Kenny Bromwich as these are solid for a 35-45FP score. A bit of luck is required if they pop for a try assist or a slam dunk try but either of these three are fine plays if you need to save salary. However you will need a “premo” play in this position and I might just skip Joseph Tapine. Tapine has been out of this world with his tackle breaking tries and absurd fantasy points per minute play. Tapine is a 45-50 minute player at best but piles up the tackles, run meters and tackle breaks in that time. But that 80FP+ scoring can’t last especially if he does not score a try. I am more confident in the work from John Bateman who is a true 80 minute player and if you want to take a chance, Hudson Young off the bench is an option.

HOK: Urghhhh… That Ricky Stuart curveball starting Silivia Havili for 25 minutes at the min price caught a few (including myself last week) as that allowed more salary to play elsewhere. Won’t be tempted this Friday. Cameron Smith is rock solid for 80 minutes and probably has a 65FP score. If the timeshare continues with Tom Starling then that $4,000 salary saving must be spent wisely. Brave if you stuck Brandon Smith in here as he is coming off the bench for a 35-45 minute effort.

FRF: With plenty of dual position plays, rostering a FRF only player can lead to lower ownership. Jesse Bromwich and Christain Welch are very well priced with Welch scoring 50FP+ in 5 out of his last 6 games. He is pretty much my 1st pick here. Look out for the trap play in Iosia Soliola. Dirt cheap but Stuart only plays him in 20 minute bursts, regardless if he starts or comes off the bench.

Final Word: As a Storm fan I am not so confident that the Storm do this easy. It is going to be a low scoring grind on the scoreboard so look to invest in the forwards. The Raiders are a worthy prelim opponent and don’t be surprised if this Canberra run to the premiership continues. 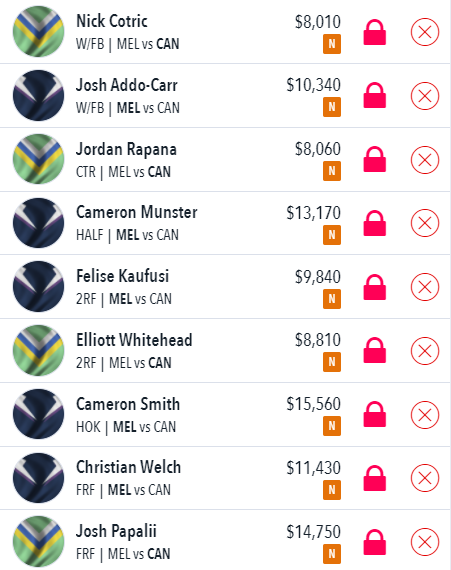