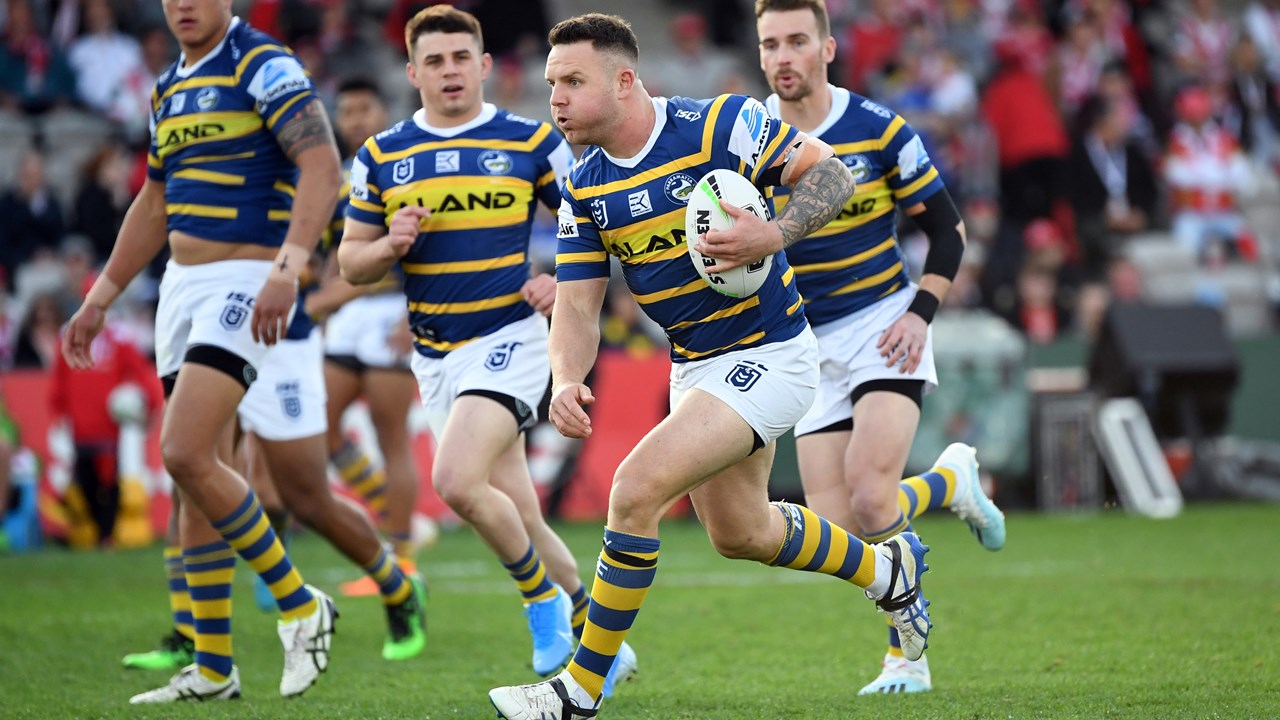 Every year the off-season gets longer and longer… Well so it seems.

Much like recent ad campaigns, will NRL in 2020 shape up to be simply the best! Plenty of off-season club transfers, the addition of the captain’s challenge, a new Townsville Stadium, new club rivalries, State of Origin at Adelaide Oval, the list is endless.

It all gets underway west of Sydney on Thursday night, with the Parramatta Eels hosting the Canterbury Bulldogs at Bankwest. The Eels sit atop the list of clubs who have purchased well moving into the new year, Ryan Matterson ($14,300 DS) and Reagan Campbell-Gillard ($10,150 DS) to name a couple. While for the Bulldogs, who despite finishing off 2019 in style, will be tested with the absence of a few through injury and suspension.

As expected, the fantasy world has come to the party with a whopping $20,000 prize pool up for grabs at Draftstars, while Moneyball will have a minimum $15,000 guaranteed in their contest. With that said, let’s break down the opening game and see just where the money will be won. 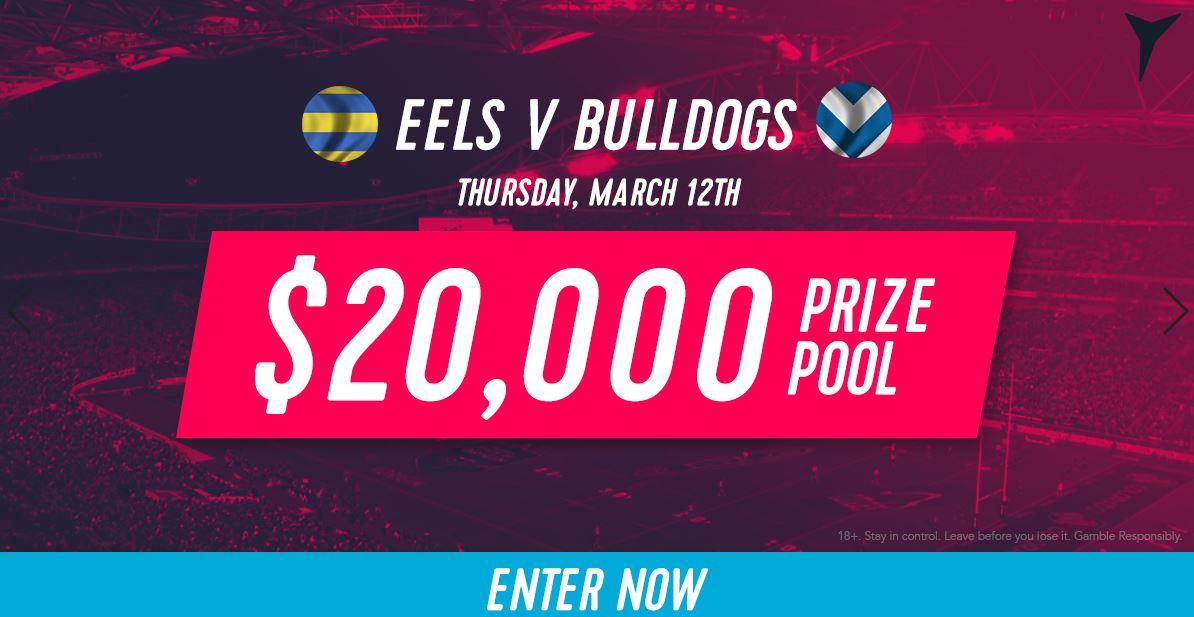 Looking to avenge their loss at home to the Bulldogs late last year, a few key additions and a bench that packs more depth than the DFR xmas party budget (Editor Note - It’s not that bad), the Eels look set for a huge season and they will want to start fast with a handy draw that sees them face plenty of 2019 bottom 8 teams in the first few rounds. As an added boost, Waqa Blake ($8,570 DS) will return from off-season shoulder surgery in the centres.

The visitors on the other hand, are dealing with the loss of Foran and have chosen to go with Brandon Wakeham ($8,670 DS) first-up, to partner Lachlan Lewis ($12,000 DS) in the halves. More concerning, the young Bulldogs pack will need to step-up with both Okunbor and Harawira-Naera out, pending an indefinite suspension. It isn’t all gloom for the Bankstown club, with those under injury clouds, set to play, as well as new recruit, Joe Stimson ($10,240 DS).

After only dropping a couple of games at home throughout 2019, and things looking up for the blue and gold, the Eels will head in as short $1.28 favourites, giving their opponents a 10.5-point head start. While the margin is easily justified, round 1 is notorious for throwing up a few curve balls and I expect this to be closer than expected.

When both sides clashed in round 2 last year, the Eels ran away convincing winners off the back of a Blake Ferguson (90.8, $8,400 DS) onslaught, scoring a double from 298 running metres and 10 tackle breaks. Dylan Napa (62.2, $8,520 DS) was another recent recruit to score well in the match, crossing the stripe with 5 tackle breaks from 182 metres.

The Bulldogs got revenge in round 23, in a tight Bankwest victory, with Will Hopoate (88.3, $12,730 DS) stamping his authority as a gun Centre off the back of 263 running metres, 10 tackle breaks and a meat pie. While the outgoing Manu Ma’u was damaging for the home-side as they looked to lock down a finals berth.

In 2020, there will be plenty of new features, including player correlation, how players score in similar line-ups, and more. The player correlation scores below show well a player has scored in their position with and without their team-mates. 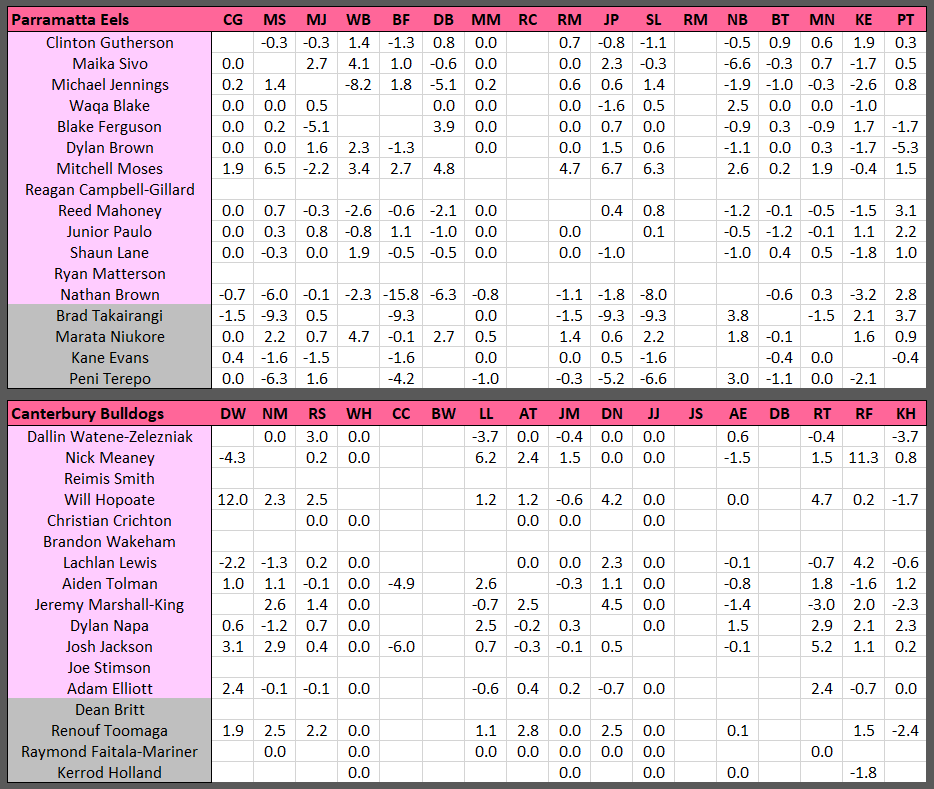 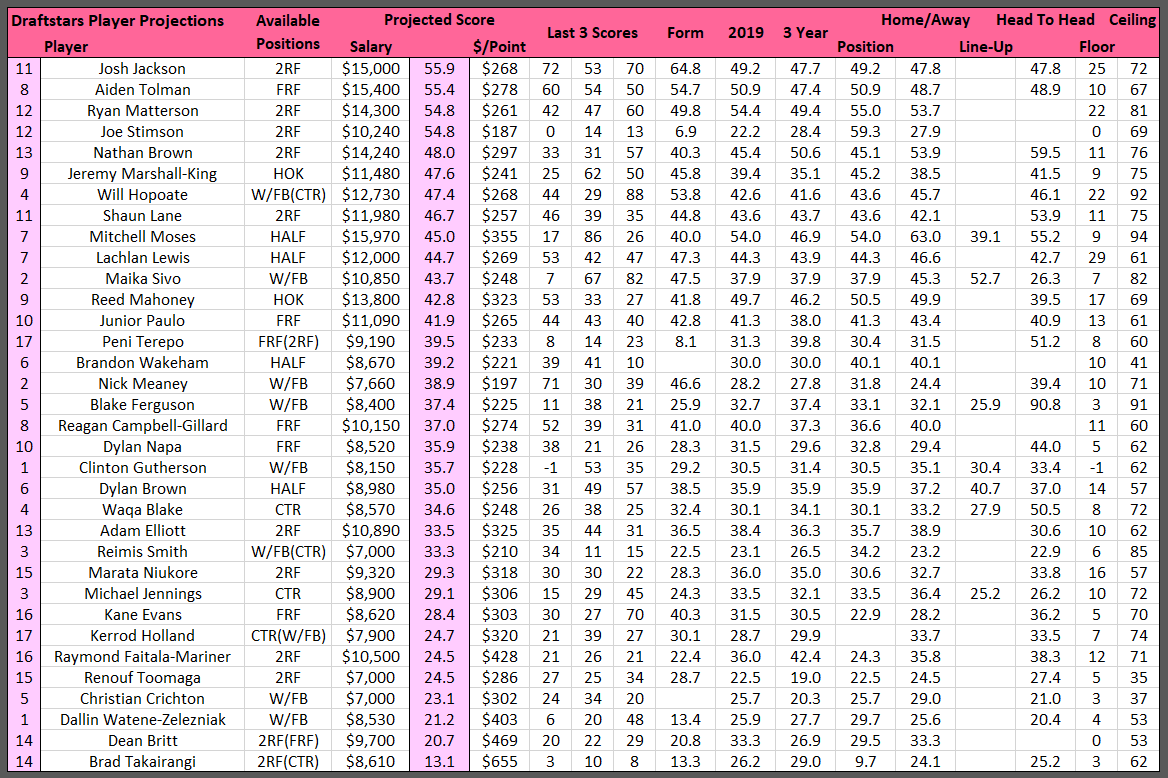 New recruit to the Bulldogs forwards pack, Stimson jumps straight into the back row through the absence of Harawira-Naera. Likely to play big minutes, Stimson scored well when starting for the Storm last year and is only likely to continue here, going at a bargain of $187/point. In a match-up where value appears hard to come-by, expect Stimson to be in plenty of sides.

Another to make the move in the off season, Matterson, although not the best of value, does look set for a huge score as an excellent fringe player against a rather week line-up. A consistent top-line scorer for the Tigers in 2019, Matterson made the move just a year after making his debut for the club. Versatile both in defence and attack, there is very little risk to having him in your line-up.

With an Asterix hanging over his head, Marshall-King enters this match with a slight injury niggle, but given he is fit to play, it is very unlikely that he will be coming off and if so, it will likely be late. Holland looks the only viable option from the bench, but with that considered, JMK should still score well in defence and represents far greater value than Mahoney.

Yes, they’ve got a weak match-up! Yes, he was a dominant scorer in 2019! But no way should Moses have the largest salary in this contest. Wakeham, Lewis and Brown all represent far better value in this contest and although Moses isn’t a complete fade, I’d rather be spending his cash elsewhere. Happy to have egg on my face tomorrow night if I’m wrong.