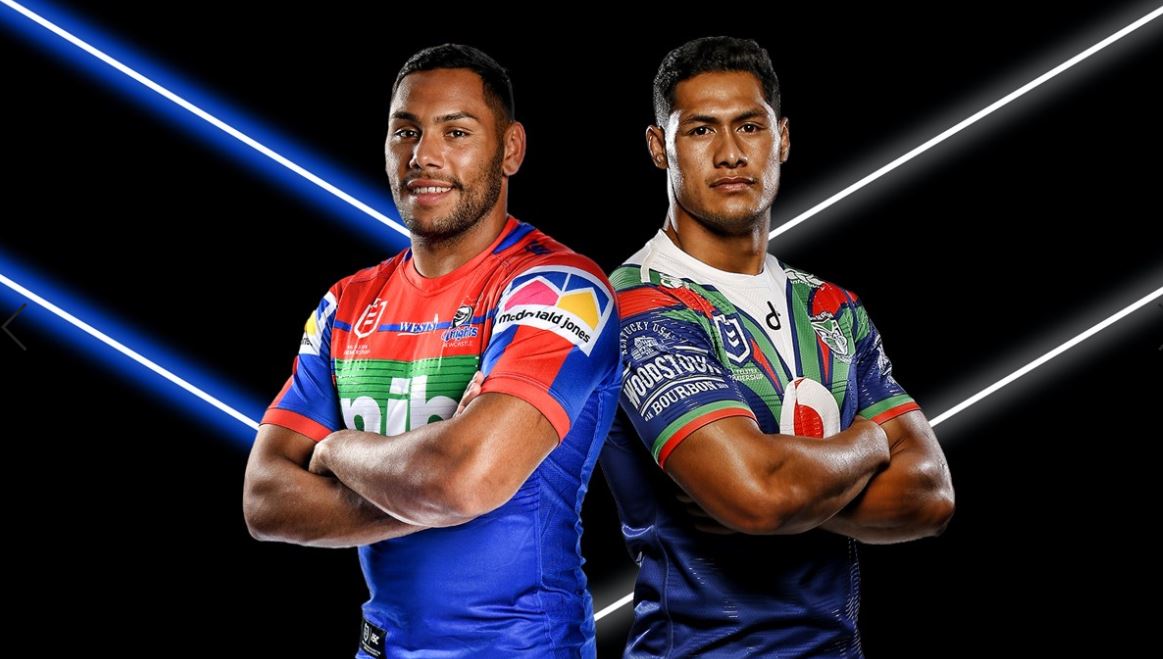 Just going to get straight into it with a bumper Saturday slate! It all gets underway at McDonald Jones Stadium, when the Newcastle Knights look to notch up an early couple of points against the New Zealand Warriors. Straight after that, the South Sydney Rabbitohs host the Cronulla Sharks at ANZ, before the Penrith Panthers take on last year’s premiers, the Sydney Roosters, at Panthers Stadium.

Draftstars have thrown up a generous $10,000 guaranteed for the 3-game slate and that is only likely to increase with ‘Player Swap’ allowing those to change out any late injuries or coach brain explosions. With that said, let’s break down the 3 games and see just where the money will be won.

Speaking of the ‘Player Swap’, a great addition to NRL in 2020, we have all come accustomed to late minute changes and in this ever-evolving world of COVID-19 and god knows what else, there is nothing worse than selecting a line-up, scoring well for the majority of your team, only to miss out on the cash due to a Trent Robinson meltdown and Boyd Cordner making a 20th hour appearance in the Roosters side. So, keep across the socials as team line-ups are confirmed an hour prior to kick-off and be sure to make any late changes via ‘Swap’ section if need be.

Looking to find themselves in the finals for the first time since 2013, the Knights get a pretty handy contest to begin the season, coming up against a Warriors side that looks average at best. Jayden Brailey (HOK, $12,530 DS) and Kurt Mann (HALF, $9,500 DS) are expected to be highly sort after, given their appointments to key spine roles. While Wayde Egan (HOK, $9,630 DS) and Chanel Harris-Tavita (HALF, $10,100 DS) could be popular picks for the visitors. 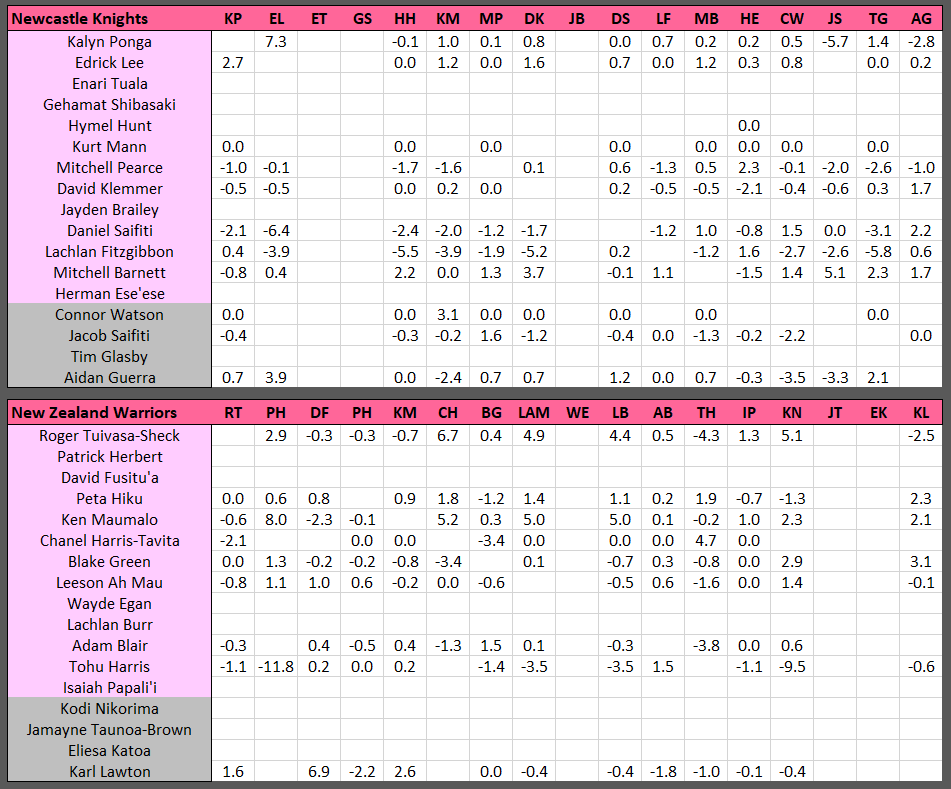 In their first year since the Gallen retirement, the Sharks look set for a tough year and it doesn’t get off to an easy start, taking on the Rabbitohs at ANZ. Jack Williams (2RF(FRF), $9,460 DS) will take up the role vacated from the retiring club great, while Jesse Ramien (CTR, $9,340 DS) returns to his former side after a 1-year stint in Newcastle. One of the highly spoke about transfers in the off-season, Latrell Mitchell (W/FB, $12,870 DS) makes his debut for the Rabbitohs, while Liam Knight (FRF(2RF), $11,880 DS) finds himself at lock for the departed Sam Burgess. 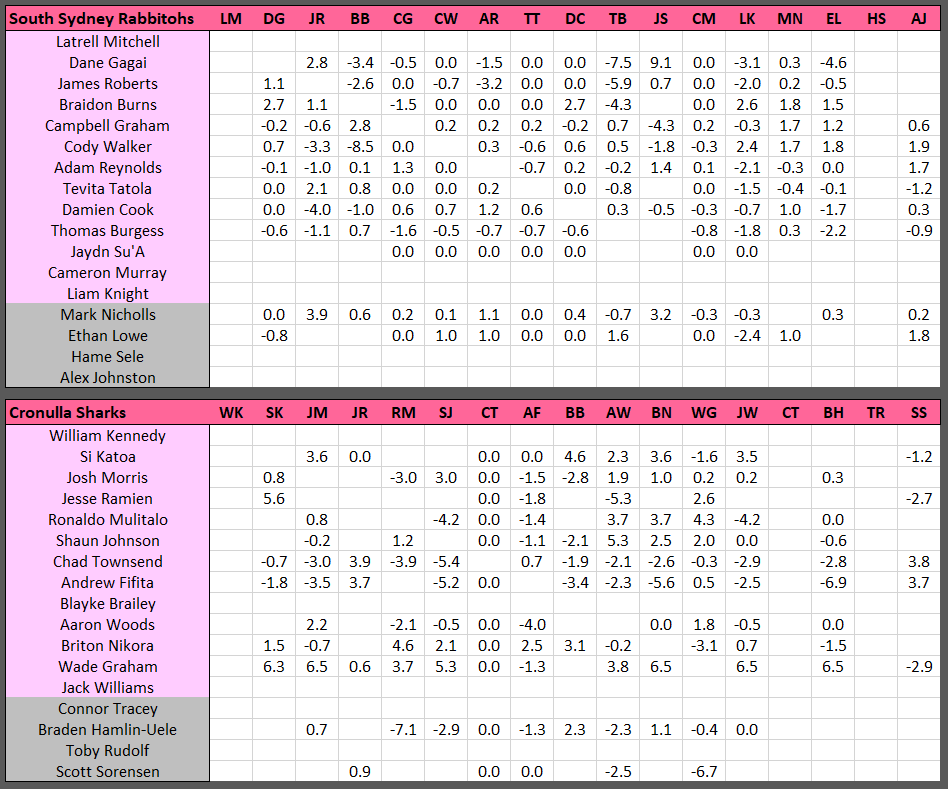 The defending back-to-back premiers get their campaign underway later that night when they travel to Penrith to take on the Panthers. In the post-Cronk era, Kyle Flanagan (HALF, $10,570 DS) makes his debut for the tricolours, while Jarome Luai (HALF, $9,160 DS) will be the first at-least replacement for the Panthers, since the departure of James Maloney overseas. 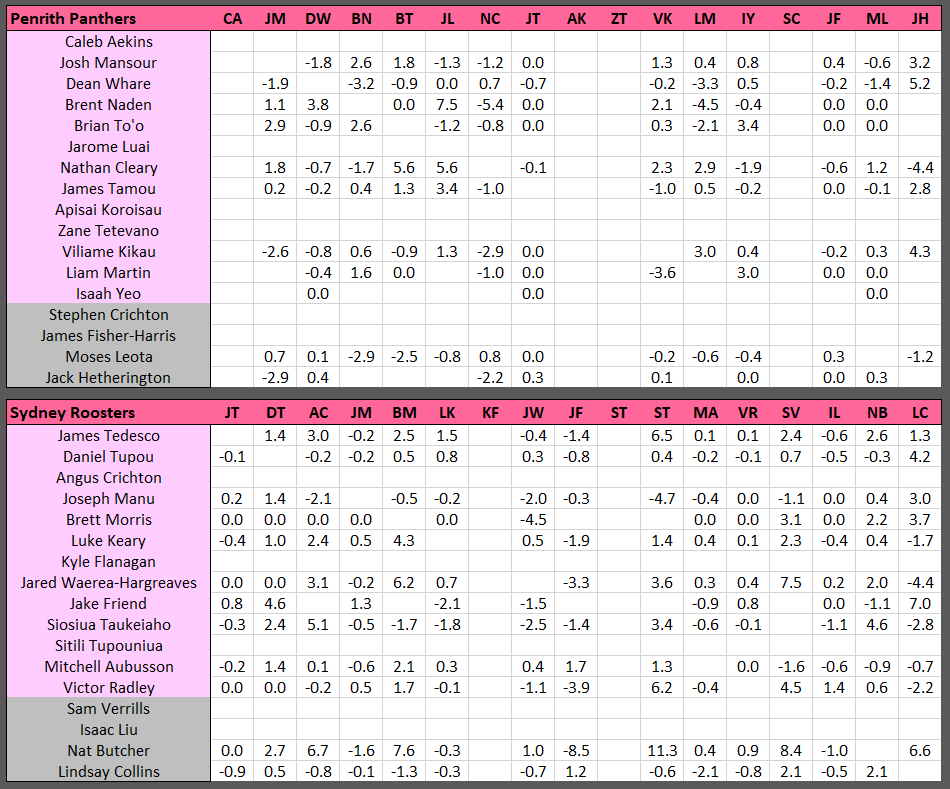 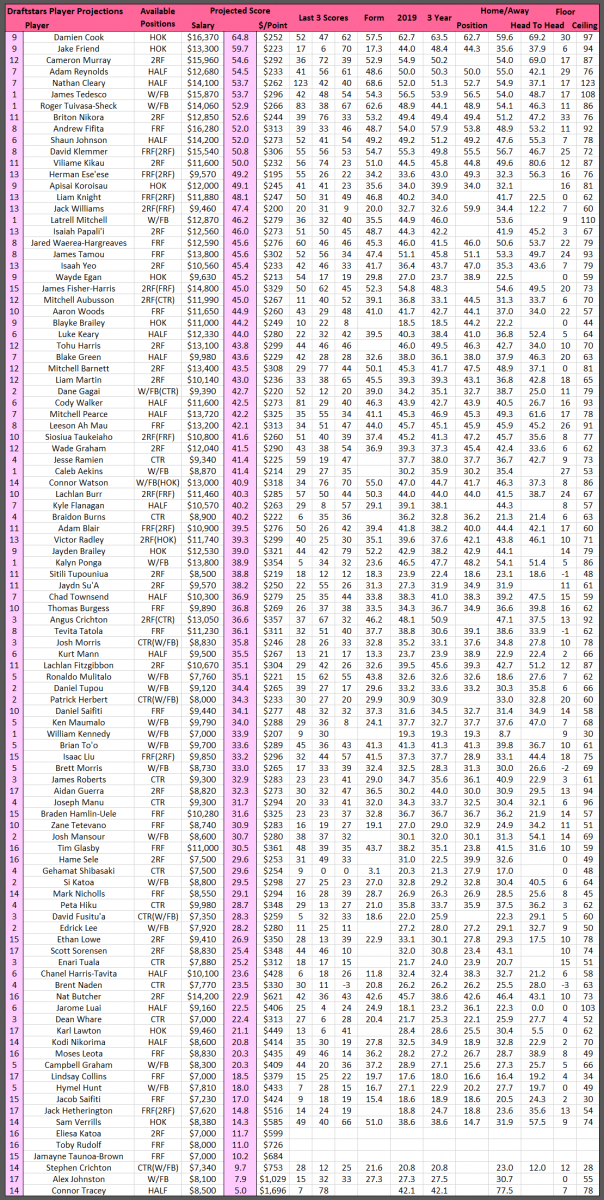 With the recently retired Gallen now out of the side, Williams finds himself at lock and is likely to score very well there at a bargain price. Expected to play the full game, Williams will score well in defence and in a 3-game slate where it is hard to squeeze the big guns in, at less than $10k, Williams is a perfect addition.

Another that finds himself in a newly appointed lock role, Ese’ese will only need to play a minimum of 50 minutes to score well. Given that, there is plenty of upside, depending on how he is used. Another that will also free up some salary space for a 3-game slate, expect many to field Ese’ese in their line-ups.

Returning to his former side, Koroisau’s days of playing less than 40 minutes before being hooked look gone and he is expected to score very well as the new Panthers starting hooker. Not exactly cheap, but potentially as good as Cook and Friend in Saturday’s slate, Koroisau will score well in defensive stats while not breaking the bank.

Despite playing big minutes off the bench last year and scoring well, taking $14,200 for a bench player in a 3-game slate just looks toxic here. The addition of Crichton playing in the centres could also impact Butcher’s minutes if coach Robinson does centre/second row mid-game switch to limit the workload.

Another well over-priced, Crichton will start in the centres this week, but may swap with Aubusson throughout the game. Although this does add to the possibility of Crichton scoring well in attacking stats, he will suffer significantly in defensive scoring. A clear fade in this contest with plenty of value options across the 3 games.

Brailey makes his debut for the Knights against the Warriors and although he is expected to score better than 2019 where he partnered with his brother, he is far from value here with plenty of great options in the hooking role for this slate. Watson will come off the bench and likely to eat heavily in to Brailey’s minutes, especially if the Knights are on top early.