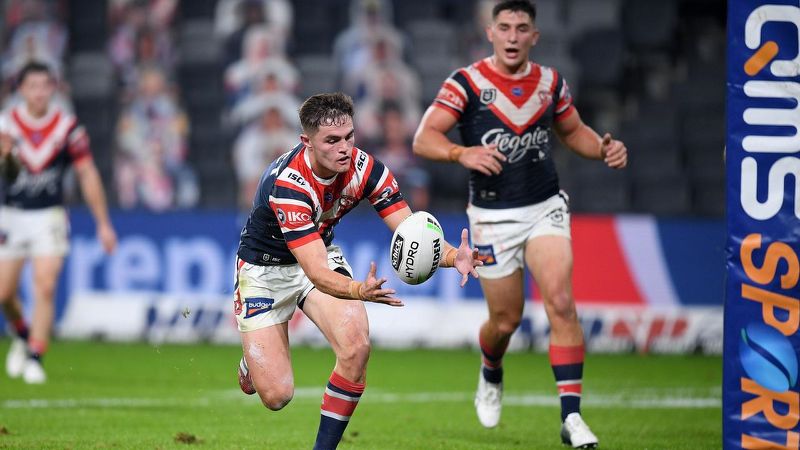 Welcome to another Super Saturday. Play 5 Roosters backs and whoever else you can afford, the end. Kidding of course, but you don’t get such a clear stacking opportunity as this one very often, and the only deterrent is some high prices and likely extremely high ownership.

The Sharks/Dragons game could be an entertaining affair with plenty of chances for points, while the Raiders will probably make life tough for the Rabbitohs in freezing Canberra. All games have a moderate chance of getting some rain, but it’s an unknown at this point so maybe check closer to the start of the slate and make some weather decisions then.

WFB: Clearly the Roosters backs are all in play, so I’m just going to skip them and try to find some other interesting options. One who is actually more interesting than the Roosters options is Sione Katoa $7,000. Something went wrong with the pricing algorithm and one of the highest ceiling backs in the NRL is at minimum price. He’s scored 70+ 3 of his last 5 games, he’ll be extremely popular. Jordan Rapana $7,800 looks like he’s starting to work his way back to form and fitness, and now playing at centre where he could have a little more scoring power to match with his elite history from a couple of years ago. On the other wing Nick Cotric $9,100 has plenty of ceiling for his price, but he’s as volatile as all wingers so don’t go overboard.

CTR: Mitch Aubusson $10,190 is always a fine play when he gets the 2nd Row start, but unless he gets a try in this one I think we can find better options. Jarrod Croker $8,090 is far too cheap for his upside. Bryson Goodwin $8,160 replaces Josh Dugan and is one to watch at his salary. If either of those teams get on top, I think Goodwin and Croker will take advantage at lower ownership. With these two and the Roosters options all below the $10,000 mark, I will be fading the 5 highest priced players at the position.

HALF: Kyle Flanagan $14,090 continues to score 50+ with ease, and it won’t stop today. Luke Keary $12,270 is of course the other clear option. If you want to avoid the Roosters chalk, there are a plethora of quality scorers all priced similarly who can be used in line with any game stack you desire. Personally I think both Raiders halves are attractively priced, especially George Williams $13,180 who does everything very well and subsequently has a floor close to 50 points. Last week I loved Ben Hunt $15,860, but this week he’s gotten a tad expensive for my liking.

2RF: Don’t play Kai O’Donnell $7,800, it's been a train wreck to see O’Donnell get the start but only play 25 minutes. I also worry about Tyrell Fuimaono’s $9,860 minutes with Cam McInness playing 80 minutes at lock and 4 forwards on the bench. Instead I’ll be looking at Wade Graham $9,700 and Jayden Su’a $10,190 who I know can play 80 minutes and score well, even if they haven’t been doing so lately. The Warriors forwards should have plenty of work to do between stints under the goalposts, and Jazz Tevaga $12,810 in his first game back starting is a perfect player to take advantage of that. Boyd Cordner $11,250 is a real chance to crash onto some short balls and score the 50+ he needs to be relevant.

HOK: Jazz Tevaga is playable here, as is Ben Hunt. My favourite play is Cam McInnes $17,190, who has crept down in price a little to be cheaper than Damien Cook $17,690, and has the same kind of 90+ ceiling. Siliva Havili $11,360 and Karl Lawton $11,050 are both cheap starting hookers, but neither is likely to play more than about 50-60 minutes with backups on the bench. One of those backups is Tom Starling $8,530 who was great last week. If he can get 40+ minutes again he’s a worthy punt play, which is not unlikely with a back on the bench also.

FRF: Toby Rudolf $10,310 looks like a solid player in a nice role at the moment, and he’s likely to be good value at just over $10K. If you need a little more savings than that, I think Jamayne Tanoa-Brown $7,920 is a similar player who loves a tackle and is back near minimum price somehow. His form has been trending down, but this seems like an okay buy-low spot. Jack Hetherington $8,500 is a very similar option and could even be lower-owned. At the top my favourite play is Paul Vaughan $13,860, who could be ignored in favour of Siosiua Taukeiaho $14,320 and Josh Papalii $14,830, but he goes up against a mostly inexperienced forward pack at Cronulla and has every chance to put a massive score and try to earn his team the W.

Final Word: Roosters stacks are fine, but there are more than enough other options to try something else as well. Bit of a shame about the Katoa pricing error because it will be hard not to play him now, but thankfully there are no super obvious must plays in the forward line so we can differentiate there. Don’t forget to have a look at the weather before kickoff, and good luck!