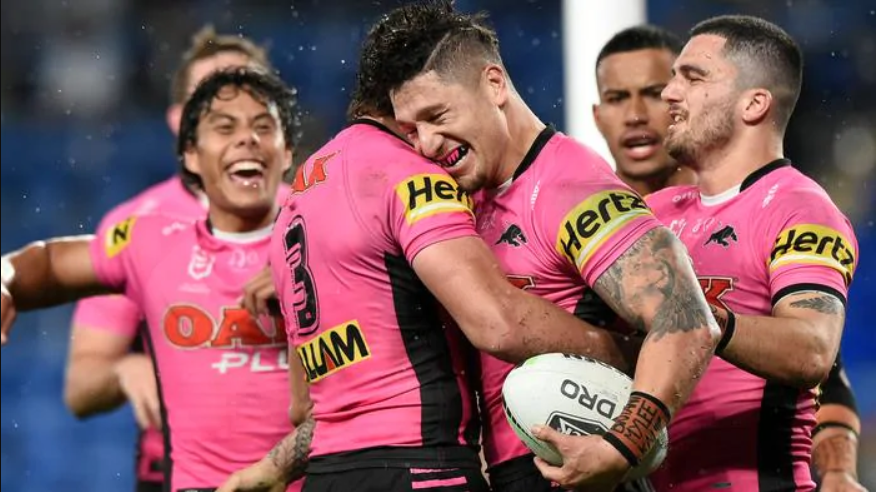 We have a nice, linear Super Saturday, with the games expected to get closer and lower scoring as the day goes on. The obvious call is to start with Roosters stacks, think about a couple of Raiders options, and then take some hard working forwards from the final game.

Obvious sometimes doesn’t win many DFS slates, so let's try to dig a little deeper. Some of the more important team changes include Brett Morris out for the Roosters, Charnze Nicoll-Klokstad for the Raiders, Jordan Mclean coming in for Josh McGuire, and the return of gun backrowers John Bateman and Viliame Kikau.

WFB: CNK being out means Jordan Rapana $8,150 gets a start at fullback, something he has only done a few times in his career and not since 2015. Having said that, 40+ points is a real chance, and he’s cheap enough to be somewhat popular. To play him you have to get past Roosters options like James Tedesco $16,400, Ryan Hall $8,360 and Matt Ikuvalu $9,110 who are primed for a massive day against the Titans. I said the same thing last week without great results, but it is still the most rational play this week. Tedesco is so expensive that he needs 75+ points to win you the slate, so I won’t be going too heavy on him. A less obvious play that I don’t mind as a contrarian option is Caleb Aekins $8,010, who has done nothing with his opportunities this year but does have a try-free 60 point game on his record from his debut in 2018, and surely has the talent to put up another big score soon.

CTR: Joseph Manu $11,960 had the big game last week and got the subsequent price bump. Morris is out with Mitch Aubusson $10,180 playing at CTR. This kills his floor but you just never know against the Titans.  Curtis Scott $7,600 is very cheap in his return game, and on the other side of the field I always enjoy playing Jarrod Croker $8,690 with the try scoring and goal kicking upside that he brings. Stephen Crichton $10,720 is the attractive play from the late game, but his price is a little high and it might be better to take a punt on the barnstorming abilities of Moses Suli $8,530 if you want to bypass the chalkier Raiders/Roosters options.

HALF: Nathan Cleary $16,020 is a point-scoring machine, and despite the big price he is unlikely to let anyone down. Daly Cherry-Evans $15,570 is almost the exact same player, without the goal kicking. Kyle Flanagan $14,620 is a level below them, but still a very safe scorer and likely to do it again this week. All of them are not easy to fit in, and I am more than happy to move down another level and take George Williams $12,940, who is the cheapest he’s been for a while and as good of a halfback as any of them from what we’ve seen so far, it’s just that he has to share more base stats with Jack Wighton $13,830 than the others do. Luke Keary $13,190 is a bit expensive for me, but this is a GPP so if you think the field will ignore him for that reason, he might just be the play that wins the slate. Jake Clifford $10,920 gets to run the team by himself this week with lanky forward Mitchell Dunn $8,190 (2RF) as a halves partner, so if you think the Cowboys can stick it to the Raiders up in Townsville he could well be a great sneaky option.

2RF: Jake Trbojevic for $13,500? Now that’s the kind of hard working forward in a close game that I was talking about in the intro. It may be a bit of a cash play, but you can get away with a couple of those in a GPP and there is no outstanding value at this position anyway. I don’t know whether to trust John Bateman $13,260 in his first game back, but he could be a worthy pivot if he comes out firing and is ignored by the field. Of the cheaper plays, it’s unwise to totally ignore the massive upside of Viliame Kikau $9,650 at such a low price, and Sitili Tupouniua $8,990 is a similar barnstorming option on the left edge in an easy matchup.

HOK: It’s not often that you lead off this section with a hooker starting off the bench, but young Tom Starling $8,880 has shown great talent two weeks in a row, and his price has barely moved. It looks like he has a solid 50 minute role, and he is close to a point per minute player in pure base stats. In other words, he’s way too cheap, and hopefully underowned off the bench. Perfect recipe. If that’s not convincing, then Nathan Peats $10,850 and Mitch Kenny $11,200 both scored great playing 65 and 80 minutes respectively while filling in last week. They get the same role this week, although Erin Clark and Api Koroisau are both lurking in the reserves as potential late inclusions. I cannot stomach Jake Friend $13,580 as an old, injury prone player who isn’t even getting the 80 minutes anymore. Hard pass, maybe take a wild punt on Lachlan Lam $7,600 getting a full game if Friend goes down with injury early instead.

FRF: This is basically the land of the mid-priced, volatile options that can make or break your day. I’ll pass on the Roosters options who are all prone to reduced minutes if the game blows out. Francis Molo $10,030 and Jordan Mclean $10,120 are both cheap enough to consider, but I’d only pick one or the other in a difficult matchup with the Raiders. Speaking of the Raiders, all of their options are priced up a little high after a recent run of props scoring tries, I’m happy to pass them. Instead I’ll be looking for the late game ‘hammer play’ from any of James Fisher-Harris $14,050, Addin Fonua-Blake $13,860 or Martin Taupau $13,040 who all have the upside at their price to put a very tasty cherry on top of the earlier work done by those Roosters or Raiders stacks.

Final Word: I like this slate! I’m not sure if that’s a good sign, but this week I trust the Roosters to put up the expected cricket score in a dry day game at the SCG, and I expect closer tussles in the following two games where we can just pick off one or two value/unique options to bring things home. Good luck with it!