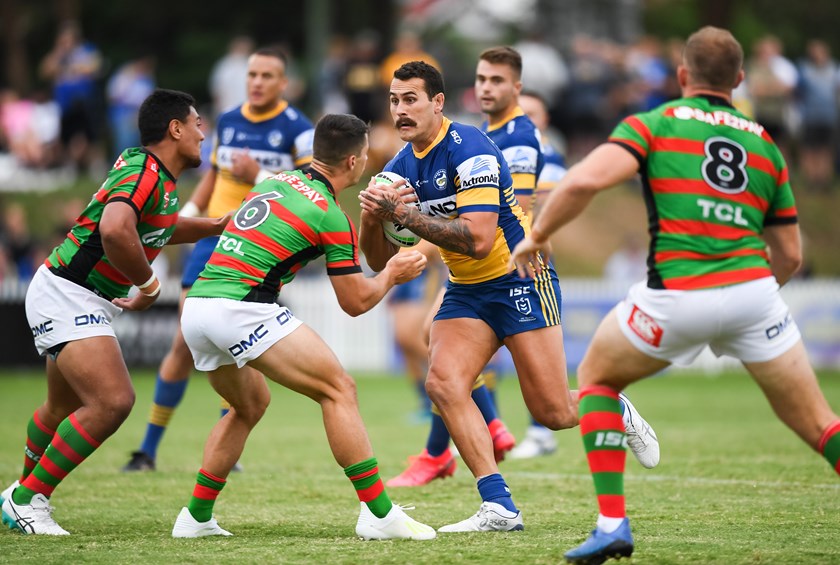 This should be a cracking Thursday night encounter. The Eels are an excellent defensive team, at full strength, and have all the attacking potential in the world although it hasn’t been fully realised lately. The Rabbitohs are more of an enigma wrapped up inside a puzzle, but they’ve been improving as the season has gone on and put a big exclamation on a 4 game winning streak with a 40 point thrashing of Manly last week.

Draftstars are back with Australia’s best fantasy contests and have posted a $15,000 feature contest in the lobby!

The only significant changes are Alex Johnston out, and Liam Knight in. Knight is a very handy piece for Souths, while Johnston’s try scoring prowess will be missed no doubt. Weather looks perfect.

WFB: It is going to be difficult to get away from the Eels backs, all of whom are underpriced for their usual output due to a quiet month (and a quiet year for Blake Ferguson $7,950). Use Fergo, Clint Gutherson $10,290 and Maika Sivo $8,160 somewhat evenly through your lineups, and I can definitely recommend a bit of Latrell Mitchell $9,690 who showed us again what he can do if he’s in the mood. Both Corey Allan $7,000 and Jaxson Paulo $7,000 are poor fantasy scorers, so I’d only consider them for extreme salary relief needs or if you think they have at least one try in them (they might need two).

CTR: Again it’s the underpriced Eels that are most interesting particularly Michael Jennings $8,630 who is due another good score after three fairly quiet games. I will happily have some shares in Campbell Graham $10,380 who again showed us how good he is last week and is still fairly priced for his considerable scoring abilities. Steven Marsters $8,150 will replace Dane Gagai in the Centres but is only a W/FB eligible player only.

HALF: Mitch Moses $14,410 and Dylan Brown $13,320 have finally had their prices corrected with Moses now more expensive. I still prefer Moses but I’m now happy to play either of them. I’ll also be using both Souths halves, particularly Cody Walker $11,060 who gives the most salary relief and has a bigger ceiling than Adam Reynolds $13,870.

2RF: Shaun Lane $11,640 and Jayden Su’a $9,620 will be running at each other all night, and I think both of them are the best chance at a GPP winning score at nice prices. Lane is the safer play with a floor of 40. Cam Murray $13,870 has gotten cheaper despite scoring just fine, so I won’t be missing out on significant shares in him either with his big ceiling. Ryan Matterson $17,170 and Nathan Brown $14,860 are both fine if you can fit them in, but I won’t be going out of my way to do so at fairly exorbitant prices after some nice recent scores. Instead I might be inclined to take some shots at Bayley Sironen $8,650 who’s had a few bad games in a row but can definitely hit the 45 that would put him on the winning lineup if things go his way.

HOK: I’m leaning towards Damien Cook $15,120 here. He’s near the bottom of his price range and has a 100+ ceiling. Reed Mahoney $13,590 burnt me badly last week when he came off after 34 minutes and then got a 6 minute early mark at the end also. I’m not sure if there was an injury involved, but I’m definitely feeling a little gun-shy with Ray Stone $7,000 (2RF) still on the bench as a potential backup.

FRF: Really hard to split the four starting props. Reagan Campbell-Gillard $12,300 and Junior Paulo $11,930 have fallen in a heap the last 3 weeks after a sustained run of elite scoring. Meanwhile Tom Burgess $11,540 and Tevita Tatola $11,180 have been chugging along with steady mid-40’s scores. With their prices all similar I think the best bet is to spread ownership fairly evenly among the 4 of them. You can also sprinkle in some Kane Evans $9,970, Liam Knight $9,950 and Mark Nicholls $9,080 who can all score 40+ on their day and potentially outscore the starting options.

Final Word: I hope this game lives up to its potential as a tight struggle with a decent amount of points on offer. If so I expect a reasonably balanced lineup to be the recipe to success, with no absolute standout value in most positions. Good Luck!