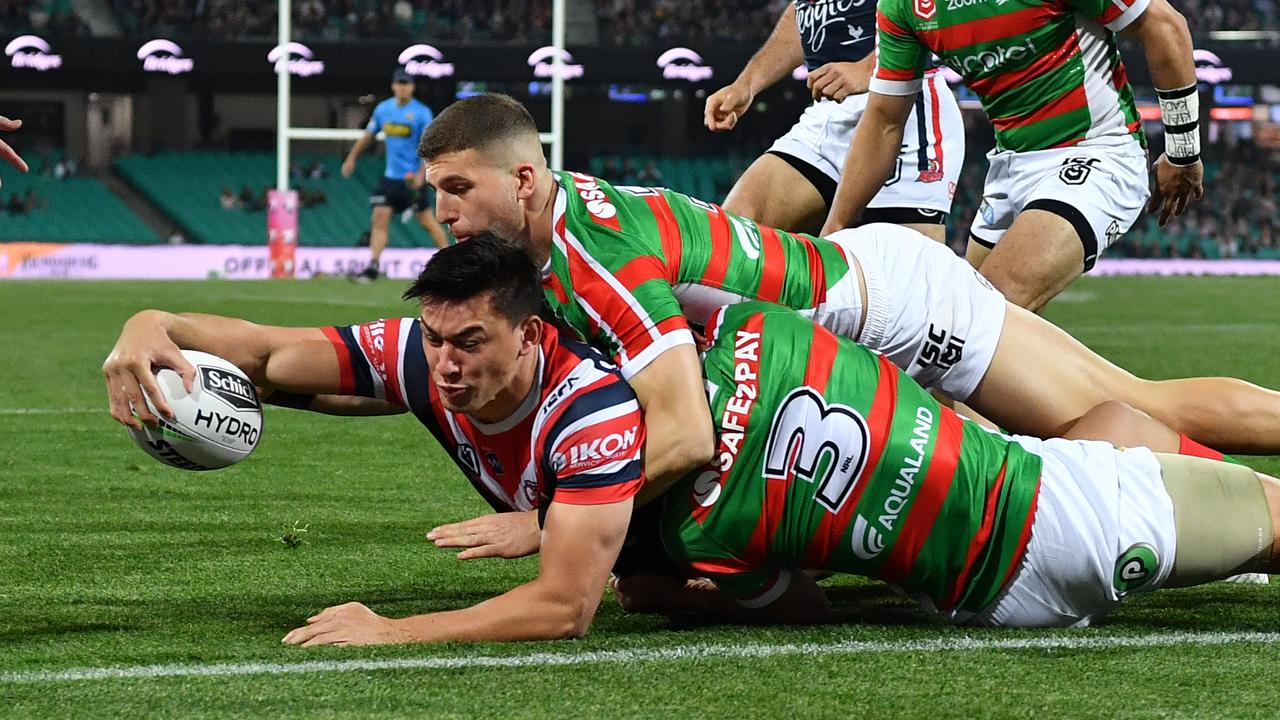 It is great to have live sport back and the NRL continues in Week 3 with a double header on Friday night. But what is also great to see is that the juicy Daily Fantasy Pools continue on Draftstars.

$20,000 contest for the Roosters and the Rabbitohs is a MASSIVE pool along with a $5,000 pool for the Cowboys and the Titans to kick off Friday night. We also have a 2-game contest for $3,000 which you can use the “Player Swap” feature on Draftstars. Perfect if a player is no longer playing in the 2nd game!

In team news from the last time they played in Round 2 (which was a long time ago) but there is some relevant news here:

Cowboys: Michael Morgan will be out for a number of weeks with Jake Clifford playing in the halves. Mitchell Dunn also comes into the starting squad for Gavin Cooper who has a calf injury suffered at training.

Titans: Oh man you have to bear with me here. In all 11 changes in either personnel or position changes for the Titans from round 2. The main change is Jamal Fogarty will play half-back and Ash Taylor moves to five-eight (Kallum Watkins has returned back to England for personal reasons). Nathan Peats returns to hooker, Kevin Proctor is also back in the second-row and Tyrone Roberts will play at Full-Back. Keegan Hipgrave is also a good welcome return for the Titans.

Roosters: Josh Morris will get a start in the centres forcing his brother Brett to the wing. Boyd Cordner would you believe it was rested for the opening 2 games, so you would think he will be fresh. Mitch Aubusson will not play due to family reasons.

Rabbitohs: With Cody Walker “currently” suspended, Troy Dargan will make his debut in the 6 jersey. Keep an eye out on team lists with James Roberts named in the reserves in jersey 20 (UPDATE - Roberts did not make the cut). Alex Johnston will play on the wing leaving Latrell Mitchell at fullback.

Check out who Smatho likes in today's games and who he gave last night's winners shoutouts too!

Our first 2-game slate in 10 weeks and we have two teams heavily favoured to win at home. Fantasy cash style builds will be geared towards the Cowboys and Roosters but there is some good value from the Rabbitohs and Titans to differentiate the field in GPP’s.

WFB: Starting with the expensive James Tedesco at $15,340 has had a quiet fantasy start to the year with a 42.2 FP average. In 2019 Round 25 against the Rabbitohs, Tedesco ran for 233 metres with a LBA and TA along with 8 TB’s for 50+ FP. Tedesco loves playing the Bunnies but will cost a pretty penny to own. With Brett Morris $8,420 moving to the wing, his try scoring potential is much higher than the previous two rounds. Daniel Tupou’s cheap salary of $9,290 brings him into play with the Roosters 8 point favourites. Understandably the Rabbitohs are on the cheaper side with Alex Johnson now on the wing at the minimum salary of $7,000. Dane Gagai $8,320 has hardly touched it through two rounds and is facing Morris who is a great defender. Latrell Mitchell $11,140 is a big fat NO until proven otherwise.

In the earlier game I am pretty keen on Valentine Holmes at $11,880 to produce on the resumption of play. Holmes took over the goal kicking back in Round 2 and will inject himself against this porous Titans defence. Ben Hampton at $7,000 is going to be a plug and move on and will be decently owned after scoring tries in both matches so far. I can’t make a case of Titans players after being shuffled around like a split deck of Uno cards. Urggh… maybe Philip Sami $10,150 but golly gosh super contrarian that.

CTR: James Roberts $10,110 has potential to play after being named on the Reserves, you will need to monitor team lists before kick off here. If he is injected into the starting lineup, Roberts is a safe play in this position (UPDATE - Roberts was cut from the 17, 24 hours prior to kick-off). Speaking of safe plays, Esan Marsters $10,580 has a reliable floor and his ceiling is excellent for a Centre. No tries yet, but 9 TB’s and 8 OL’s through 2 games keeps his fantasy scoring ticking along. Love him in this spot with a big chance to go 50+ against the Titans. Joseph Manu $9,070 and Josh Morris $8,750 are perfectly fine for Roosters stacks. Justin O’Neil $8,820 is back from his HIA (well he had 9 weeks to recover) and could be a sneaky play if players have looked into his previous FPG. Tyrone Peachey $9,500 is just that $1,000 too expensive and you can let the others go here.

HALF: Decision time, go the value with the three season debuts in Troy Dargan $9,000, Jamal Fogarty $9,000 and Jake Clifford $10,800? Or stick to the experienced options? I am leaning to the latter as Adam Reynolds $13,500 is going to be doing a lot of kicking and attacking with Dargan debuting. I will say there are big wraps on Dargan who is more of a ball runner. I rather take the value with Luke Keary $11,230 who like his team has had a slow start to the season. Ash Taylor $11,340 has moved to the 6 jersey which means he is no longer calling the shots and is left to attack more with ball in hand. This could be fantasy gold or fantasy dust depending if the Titans can stick with the Cowboys. Worth a shot in GPP’s. Scott Drinkwater $12,880 will relish the opportunity without Michael Morgan in the side. Will work really hard to lead this Cowboys attack.

2RF: Like Thursday’s night game, we have the superstar Jason Taumalolo at $18,590 and a significant salary gap to the rest. But let me remind you of what Taumalolo did to the Titans in Round 12 in 2019. 1 Try, 204 Run Meters, 1 LB, 1 LBA, 8 TB, 4 OL with 41 tackles. He is well worth the investment with 70+ minutes in each game. From there it does get a little tricky with more than enough worthy selections here. Roosters edge players Angus Crichton $13,790 and Boyd Cordner $12,150 may not play the full 80 with Sitili Tupouniua and Nat Butcher on the bench. I would proceed with caution especially with Cordner. Victor Radley $10,650 will be popular at a cheaper salary and is a good contrarian fade. Another popular choice will be Coen Hess at $9,940 after he tore up the Bulldogs in Round 2. Hess didn’t have the ideal role with the Cowboys last year but his try scoring ability really gives him ceiling appeal. However he is up against Kevin Proctor $11,660 who is a reliable defender on the edge. I am not that interested in Mitchell Dunn at $8,700 after burning a lot of owners in Round 1, but once again gets the starting opportunity with Cooper out. I may come around if I need the value.

HOK: Ok let’s remove Jake Granville $10,710 from our thought process first of all. Reece Robson $9,530 does a better job and the minutes will split down the middle. No Thank You. Another one that I will leave is the Rabbitohs dummy-half in Damien Cook at $16,630. The tackles are there and that's about it. Low run meters and not kicking the ball, maybe this changes with Targan in the halves but I need a cheaper salary before I can consider Cook again. Jake Friend is fine at $14,420 and is ideal for cash builds. Will give you 60-65 minutes and just accumulate tackles throughout the match. Nathan Peats $12,110 is an interesting one. Came off the bench after the injury to Dale Copley in Round 2 and ended up playing 2nd row for 65 minutes. Peats now gets a crack at 80 minutes at Hooker and could be in line a long night tackling the Cowboys attack.

FRF: Interesting assortment here. I’ll probably focus on Cowboys/Roosters forwards here but all should have their minutes reduced due to the lack of match fitness from the break. Paying down to Issac Liu $8,600 and Thomas Burgess $9,070 is no real issue. Tevita Tatola $10,910 is a fantasy beast if the Rabbitohs are up and about. A contrarian play would be selecting Jared Waerea-Hargreaves at $13,640 when you have the likes of Taumalolo, and expensive Hookers on the slate.

Final Word: I can’t imagine the Roosters dropping to 0-3 to start the season and the Titans upsetting the Cowboys. So the safe way to go is building Roosters-Cowboys stacks and fill with any value. For the $20,000 single game slate think about the narrative of the game and build from there.