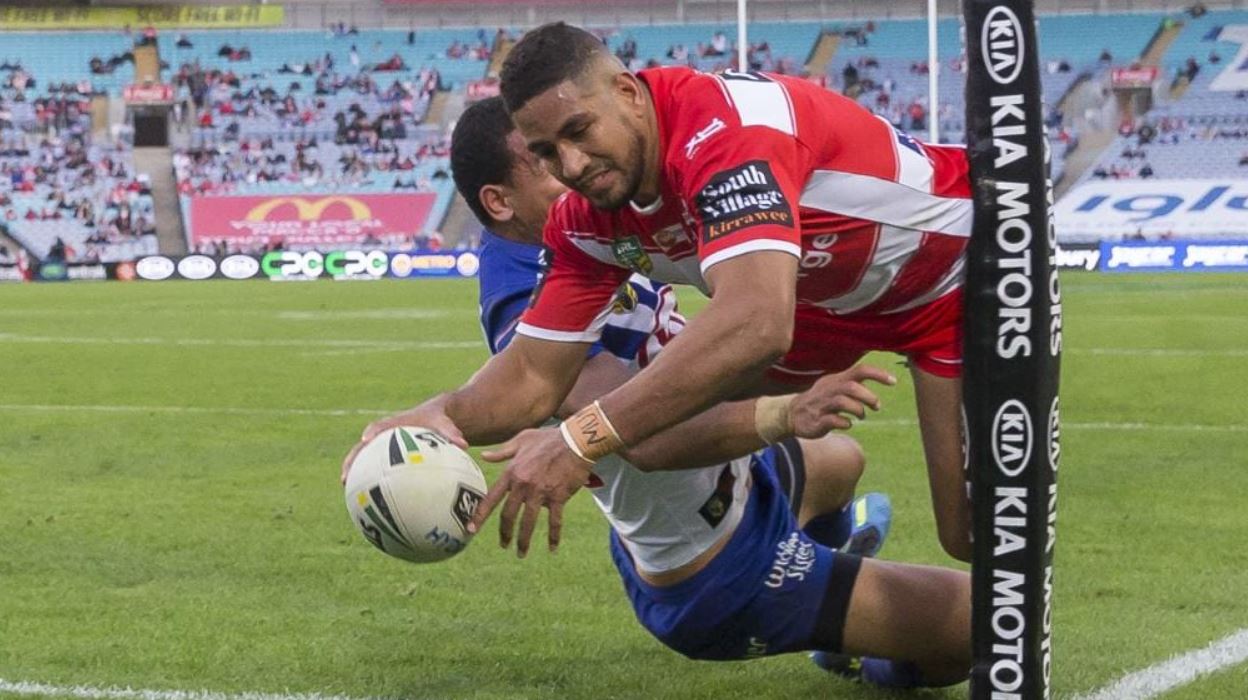 The 5 days of Round 4 of the NRL comes to an end with the Queen’s Birthday clash between St. George Illawarra and Canterbury. Both teams have struggled through 3 rounds with both teams without a win. This match is the only live sport available on Monday and whilst the quality of teams are lacking, the pools for Daily Fantasy are still there to be won.

A single game contest is available from Draftstars with the feature contest containing a $15,000 pool along with a $1,500 mini for a $2 entry.

For the latest news on teams refer to our Tweet below.

Teams are in for #NRLBulldogsDragons

Our #DFS preview for @DraftstarsAU is live now!

For the Bulldogs Kieran Foran returns into the halves replacing Jack Cogger. Jake Averillo has come off the bench to play wing replacing Christain Crichton.  For the Dragons, Adam Clune comes into the halves sending Corey Norman to fullback thus sending Matt Dufty out of the team. Josh Kerr now starts in the front row with Korbin Sims to the bench.

WFB: In a game with only a 35.5 total and in a coin flip it is important to get this position correct as we have 9 options here. Corey Norman $10,800 going to Full Back will increase his run meters from the back and join in attacking raids but at his salary is a bit hard to take in a low scoring affair. Fellow Full Back Dallin Watene-Zelezniak $7,000 is at the minimal price but had a rough time against the Sea Eagles. Will improve and is at value. The remainder of the Bulldogs attack are at bargain prices and are dart jobs. Jordan Pereria $10,370 is one to look out for with his 38.6 FPPG average. Pereria hasn’t scored a try this season and has a good opportunity here.

CTR: Zac Lomax $9,360 is the safest here with his goal kicking for the Dragons whilst Will Hopoate $10,800 is just too expensive for his current fantasy return. Brayden Wiliame $7,800 will have high ownership at his salary and is more than acceptable here. Jake Averillo $7,000 & Remis Smith $7,000 urghh… GPP darts only.

HALF: Adam Clune $9,000 suffered a broken nose in training during the week but will still get the start. 25-year-old Clune gets his chance in the 7 jersey leaving Ben Hunt $14,570 to run the ball more in the 6 jersey. Clune is an okay play but I would look to invest in the experience halves in Hunt and Lachlan Lewis $12,210. Lewis will do all the kicking for the Bulldogs and is the one to start lineup builds.

HOK: Cameron McInnes $18,770 made a mockery of our too expensive call last week but gee whiz could you spend $18K+ on one position? Tip of the cap last week to you Cameron for 75 tackles last week! The Warriors completed 40 sets in a row last week so unless McInnes bobs up for a try he is just too expensive. Add Issac Luke $9,700 to the bench which could limit McInnes’ minutes so this will allow many to land on Jeremy Marshall-King $13,390. Probably need to eat the chalk and go to JMK here.

FRF: James Graham $10,200 only played 28 minutes last week with just the one stint on the ground, but Graham has been named in at lock which surely gives him more time on the park. Paul Vaughan $14,000 is a high floor consistent safe play and has upside against this Bulldogs forward pack. Aidan Tolman $15,150 is playing huge minutes and once again is a high floor safe play but his high salary will turn a few away. If you need some cash savings, then bench options such as Sausao Sue $8,760, Renouf To’omaga $7,940 are ok to slip in.

Final Word: Not the most inspiring fantasy match this one with not many outstanding ceiling plays to choose from. Being a coin flip means you need to build balance linueps and the leaderboard is going to be super tight. Good luck!