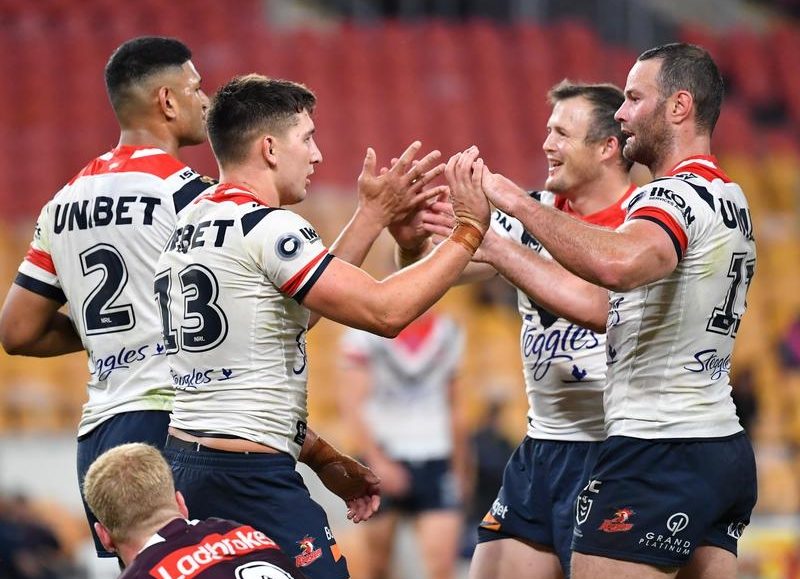 Friday's double-header of the NRL in Round 7 sees the Storm playing their home game in Sydney (Jubilee Stadium) against the Warriors along with the red hot Roosters outfit who take on the Dragons at Bankwest Stadium.

Storm - Josh Addo-Carr and Jahrome Hughes are back for the Storm and they replace Marion Seve and Ryley Jacks in the initial squads. Brenko Lee has been replaced by Paul Momiroski.

Warriors - First of all their coach was removed despite winning 2 out of the last 4 games… But there are doubts on the HIA tests for David Fusitu’a (UPDATE: Now OUT) and Lachlan Burr (UPDATE: Also OUT). But they do lose Eliesa Katoa and Wayde Egan. Keep an eye out on team lists as there may be a few late changes here.

Roosters - James Tedesco got steamrolled by Marika Sivo from the Eels and is now OUT. Brett Morris goes to Fullback and Ryan Hall goes to the wing. Mitch Aubusson also comes into the centres replacing Josh Morris.

Dragons - Jason Saab is in for the suspended Jordan Pereira on the wing and Blake Lawrie has been named to start at Front Row forward for Josh Kerr.

Our first double-header where we have two teams that are very short with at least a 2 try handicap in quite some time. A pretty simple build in double ups and head-to-head’s is to target Storm and Roosters backlines. Tough to trust the Warriors after their week but there is some merit looking at value from the Dragons.

WFB: James Tedesco $15,010 is out so that leaves Roger Tuivasa-Sheck $10,720. I don't feel comfortable with Tedesco on the slate but with Teddy out then we can have more confidence in RTS. I think we can just give one more go at Ryan Papenhuyzen $10,580 against the Warriors, if he can’t score 45+ here then we can just about give up on him. You just never know with the Warriors against this unsettled Storm lineup but Roger Tuivasa-Sheck $10,720 should be considered with Tedesco out and if you think the field will pile into Papenhuyzen or cheaper options. The field will also pile into Daniel Tupou $8,800 and Brett Morris $8,940 and rightly so. Brett Morris has always done a solid job at FB and will be staple of Single/Cash lineups. Both Morris and Tupou will feature prominently so you may want to look at Matthew Dufty $8,300 or Dragons/Warriors wingers as low ownership GPP darts.

CTR: Some great options here as they are all priced around the 8K mark. I looked at Joseph Manu $8,700 & Mitch Aubusson $9,050 1st, but they are up against quality opposition in Euan Aitken $7,530 and Zac Lomax $8,420. Aitken hasn’t quite got going yet after starting the last two games and will struggle here if the Roosters get on top. Storm’s Justin Olam $8,860 and Paul Momiorski $8,930 have been “priced” up for their Warriors matchup and they could be keys if you believe the Storm run rampant in Sydney. Tough one here, but Roosters options will be popular.

HALF: Winnings teams need a winning half. Well I think that the way it goes… And this should make the player pool smaller as this should be a choice between Cameron Munster $15,700 and Kyle Flanagan $14,500. Sort of… Both halves are priced over 14.5K and have exceptional floors and ceilings but the value is in the fellow halves pairings in Luke Keary $11,000 and Jahrome Hughes $10,740. A bit caution with Hughes however as Hughes returns from a fractured hand. Blake Green $13,560 is always criminally under owned and just produces week in and week out and is a sneaky option if you find yourself $1,000 short. But target Storm/Roosters halves here.

2RF: Having a Tedesco and an expensive half restricts your salary in this position but there is good value with Siosuia Taukeiaho $10,660 in this position along with value options in Trent Merrin $9,700 and Tyrell Fuimaono $8,370. However the top two in this position are the safest and have excellent floors in Tohu Harris $15,800 and Angus Crichton $15,140. Both of them are playing 80 minutes each and will be popular if you have saved money elsewhere.

HOK: First of all Karl Lawton $9,370 is cheap, however new Warriors interim coach Todd Payten has indicated that Lawton will be rotated through with Chanel Harris-Tavita (HALF $8,340). How long does Lawton spend on the park? Not sure, but if the Storm wins the possession battle then Lawton is going to make a few tackles whilst on the ground. Then we have x3 80 minute Hookers in Cameron McInnes $18,310, Cameron Smith $17,270 and Jake Friend $14,310. All are high scoring safe plays but gee whiz they will cost a fair packet. Slight lean to McInnes if you can get up there.

FRF: If Lachlan Burr $8,800 can pass his HIA then he has nice value if he starts. Jared Waerea-Hargreaves $11,940 is another target at a softer price than in the past which he can feast on the Dragons rejigged forward pack. Nelson Asofa-Solomona $10,160 exploded off the bench last week and is my sneaky play at just $10K. Bonus if Craig Bellamy gives him the start.

Final Word: If the results go like they should then you will see a lot of Storm and Roosters in winning lineups but sport is a funny thing sometimes and you may need to zig when others are zagging.