Nothing like a couple of powerhouse clubs on a Thursday night to get a round started, and this is exactly that! The Storm who are now located in NSW take on the red hot Roosters outfit that needs to recover from some big injuries.

Draftstars continue to support NRL Daily Fantasy with over $60,000+ in guaranteed prize pools over Round 8. New to Draftstars are the “casual contests” which means the higher end players of the site are restricted to play in these contests. A $2 mini contest is available for everyone apart from the restricted. A great move for new NRL Daily Fantasy Players looking to learn on the platform. 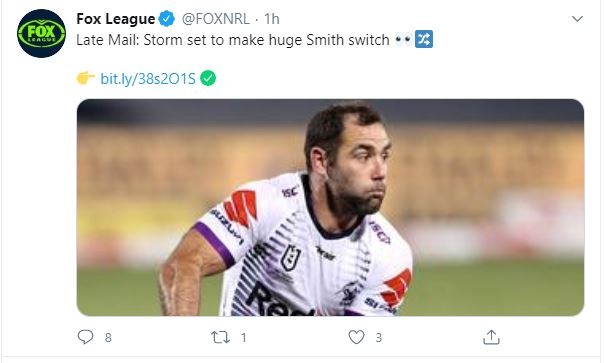 Both teams have lost a key player for this week in the form of Munster and Radley, and in particular the Storm look a little weaker this year for depth and ability in the team. That’s reflected in the odds, but as we all know the NRL is a wide open competition and no result can be taken for granted. Lean towards the Roosters winning when crafting your lineups, but a couple of Storm stacks can’t hurt.

WFB: James Tedesco $15,580 is back! Surely at the top of every NRL club's signing wishlist, and likewise for many a fantasy lineup. Having said that, there are several good options at this position tonight and I recommend spreading ownership around as much as possible. Brett Morris $10,540 is very expensive now that he’s back on the wing, and I’d prefer to take the ridiculous price on Ryan Papenhuyzen $8,400 with his ability to bust the line. Daniel Tupou $9,000 is playing well and is still cheap enough to get a lot of ownership.

CTR: Paul Momirovski $7,860 was huge last week, and is very cheap. I’m sure he’ll attract some ownership, but I’m wary of the fact that he’s running at Josh Morris $8,390 who is a great defender. The more likely winning play is either of the Roosters centres, Morris or Joey Manu $9,700, who should benefit from a likely Roosters win.

HALF: Jahrome Hughes $11,660 was great last week and should get some more responsibility with Munster out. He’s volatile though, and we’re more likely to get a ceiling game from the red-hot Kyle Flanagan $14,760 or the cheaper Luke Keary $11,700. Ryley Jacks $9,550 isn’t a terrible play, but he’s 4th in line out of this bunch.

2RF: Nat Butcher $9,700 is almost a lock on this slate. The 23 year old is a stud-in-waiting, and has a very safe 45 points, more than okay at his price. Almost everyone else is reasonably priced, so I see no reason to use any bench players. Kenny Bromwich $10,580 has been struggling this year, but I’m going to keep playing him plenty and hoping he recaptures some of last year's cracking form. Angus Crichton $14,800 is the clear high-ceiling play, it's hard to ignore his red hot form recently and the only possible downside I can see is Mitch Aubusson $8,700 giving him a spell if the game is over early.

HOK: Jake Friend $14,600 looks like he’s getting 80 minutes in this one, and that brings with it an expectation of something approaching 60 points. I was all hyped up to recommend all in on Friend, but Draftstars went ahead and priced Friend up and Cam Smith $15,940 down, and I now have to lean towards Smith for the higher ceiling and less chance of injury. It’s close, Smith loses a little ceiling if the Storm struggle to score points and gift him bonus points from goals.

FRF: For whatever reason I don’t like using Christian Welch $9,850, but I think this is the week to change that. He’s shown a ceiling similar to that of Jesse Bromwich $10,530 this season, and he’s long enough back from injury to be trusted. He is sharing the role with Nelson Asofa-Solomona $10,650, which is a concern. Both Roosters props Jared Waerea-Hargreaves $12,550 and Siosiua Taukeiaho $12,170 have big ceilings and playing one or both in every lineup is more than okay.

Final Word: I feel safe leaning on Roosters stacks and putting most of my Storm exposure towards Cam Smith and some of their cheaper forward options, but that is likely what everyone will do, so feel free to do something different if you want that top prize. Good Luck!