We’re on the final day of Magic Round, but we still have three full games of rugby league to enjoy. Like most of the weekend’s games, things look a little lopsided. In fact, we have the top 3 teams on the ladder taking on the last three teams in the top 8. First off, the 8th placed Warriors will try to tame the 2nd placed Eels, who are at least slightly weakened. Next the 3rd placed Storm face the 6th placed Dragons, and again the Storm have lost some key players to give the Dragons some hope. Finally, the 7th placed Titans have a massive task against the unbeaten Panthers. In this instance the Panthers are as strong as ever and the Titans themselves a little weakened. Again, Brisbane should turn on perfect weather for the day.

The only change for the Warriors is Ben Murdoch-Masila coming in for Bailey Sironen in the second-row. The Eels have several changes, with Dylan Brown and Marata Niukore going out due to suspension, replaced by Waqa Blake at centre and debutant Jakob Arthur at five-eight. Ray Stone replaces Keegan Hipgrave on the bench.

The Storm have some big changes, with Cameron Munster and Harry Grant injured, and Brandon Smith suspended. The subsequent reshuffle sees Ryley Jacks at five-eight, Kenny Bromwich at hooker, Tui Kamikamica in the second-row and Dale Finucane at lock. Tyson Smoothy comes onto the bench. Ryan Papenhuyzen is lurking in the reserves and could cause a further reshuffle if fit to play. The main change for the Dragons is the return of Mikaele Ravalawa in place of debutant Mathew Feagai. There is a minor change on the bench which could easily be reshuffled before the game as it was last week, with Junior Amone in a utility role.

The Titans headline change is the suspension of David Fifita, meaning that Beau Fermor is likely to play second-row and Esan Marsters move into the centres. I also expect Erin Clark to fill the empty spot on the bench. The Panthers only have one change, with Kurt Capewell out, Liam Martin starting in the second-row and J’Maine Hopgood joining the bench.

It’s tough to single out a Panthers back at the moment, but if I have to pick one Crichton looks right at home with his move to right centre. He’s still nice and cheap, and the Titans left edge has lost it’s key pillar in David Fifita. Despite just hitting his ceiling last week, it will be hard to stop him from going huge again.

Moses has been good all year, but his price is still very reasonable. This week he will likely have full control over the kicking game with Dylan Brown out, as well as plenty of attacking upside against a shaky Warriors defense. Throw in the prospect of plenty of goals, and I see a huge ceiling for Moses this week.

When it comes to Panthers forwards, it’s not hard at all to see which ones are the best play. Liam Martin gets the start with Capewell out, and Kikau has gone a few weeks without a really big score. If I had to choose just one it’s Kikau, but either of them could go massive today.

Fuimaono is a handy player, but his versatility really hurts his upside. His current job of filling the Lomax sized hole at right centre doesn’t bode well for his scoring, unless he manages to fall over for a couple of cheap tries. In this case he’s running at the defensive rock known as Justin Olam, and I don’t like his chances.

Brimson has found some form the last few weeks, but he still only has one ceiling score this year, and it’s very unlikely that the next one will come against the Panthers. Save him for next week against the Bulldogs.

I tipped Moses partly due to his kicking upside, but I do admit that I’m not sure how much of a role Arthur will play in that area of the game on debut. I’m not expecting a ceiling game with so many other guns around him to pull the weight, but maybe he gives us a Sam Walker style start to his career. 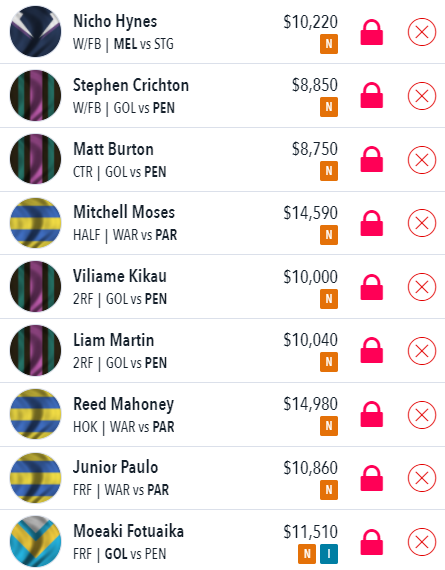