Round 15 feels like a more normal round after a couple of weeks that were very Origin affected. We kick it off with the Broncos (3-11) hosting the Rabbitohs (10-3) at Suncorp Stadium. It’s hard to say anything about the form of these teams that their win-loss record doesn’t tell you. We have a bad team and a good team respectively, but both are capable of a random on/off day. A lovely Winters Day in Brisbane should provide reasonable conditions for footy.

Draftstars has a $25,000 contest with $2,480 to first place. There are also several other contests including the Mini, Micro, and the High Roller. The clear air from no Thursday night AFL means a bigger prize pool, which requires a little more unique thinking if you want to make your way to the top. Don’t be afraid to take a couple of shots at low owned players who could benefit from an unexpected role change or some random attacking upside.

The Broncos welcome back Xavier Coates after he was withdrawn 5 minutes before the game last week. His last-minute replacement in Tesi Niu was impressive enough to retain his spot at fullback, meaning Dale Copley goes out (although he remains on standby in case Coates is deemed unfit to play). Keenan Palasia is named on the bench in place of Corey Paix, although they swapped spots an hour before the game last week.

The Rabbitohs welcome back a host of Origin stars, with Dane Gagai, Jai Arrow, Cameron Murray and Damien Cook all coming back in. Benji Marshall, Jaydn Su’a, Liam Knight and Peter Mamouzelos all make way, while Braydon Burns, Hame See and Jacob Host all revert to bench roles after starting last week. It’s a significant amount of upheaval, but there is no doubt the team looks a lot better.

It might be a bridge too far to try to be different by stacking Broncos backs but trying to force one of their cheap options in could be a useful way to be unique as they can still score a few points at home. The same thing can be achieved with a cheap bench forward.

Teammate Dane Gagai is probably going to be the wildly popular play at centre, but I don’t want to miss out on the massive upside of Graham. He’s been a bit all over the place this season, with only two ceiling games. I still believe strongly in his talent and see this as a perfect opportunity to beat up on a bad defence.

Another high upside play that has been hitting lately, despite averaging almost a try per game in 2021. Looking through the stats, it seems that he’s kicking a little less and tackling a little less than in 2020. Part of that can be attributed to several games at fullback. We can’t be too far away from a game where he puts it all together, and I think a game against a bad team when all his teammates are back around him seems like the perfect opportunity to do so.

With no really cheap value plays on the slate, it’s going to be pretty hard to build a nice-looking line-up while spending up big for Haas. That’s why I’m so keen to do it, especially after 4 weeks of quiet scores by his lofty standards. He should be fairly low owned, and I expect a full allotment of minutes after last week’s mini-rest. It will take a 75+ score to make him a must-have, but he usually does that in about 50% of his games.

If I’m talking up one Broncos prop after a lean run, it’s only natural that I talk down his front-row partner after three weeks of biggish scores. Lodge has been in the 53-57 range for 3 games running, and 4 of the last 5. That’s almost 10 points above expectation and is unlikely to continue without some down games. The price has gotten pretty up there, to the point where he’d need to go 65+ to really hurt you. From what I can see he’s only done that twice in his career, so it’s not a particularly scary fade.

Glenn is still a solid footballer, but he’s an old man with old man calves, and I can’t see him getting near the 50+ ceiling he’d need to hit in this game. If anything, I’d rather do a big salary sacrifice at this position and take some pot-shots at TC Robati and Keenan Palasia who have a bit more random upside at lower ownership.

Things got off to a rocky start last week in Hunt’s NRL return, when he put up 13 points in a big loss. He looked to be playing as a secondary facilitator, just passing and kicking when Gamble wasn’t in position to do so. If the role continues, he’s got very little upside. The question mark comes from buying too much into a one game sample size after a 12-year absence from the game. He could come out this week looking to get more involved and run the ball more often, in which case there is a better (although still fairly small) chance that he could provide some value. 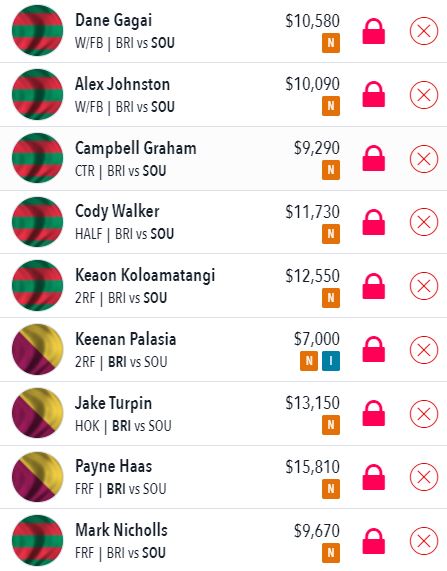