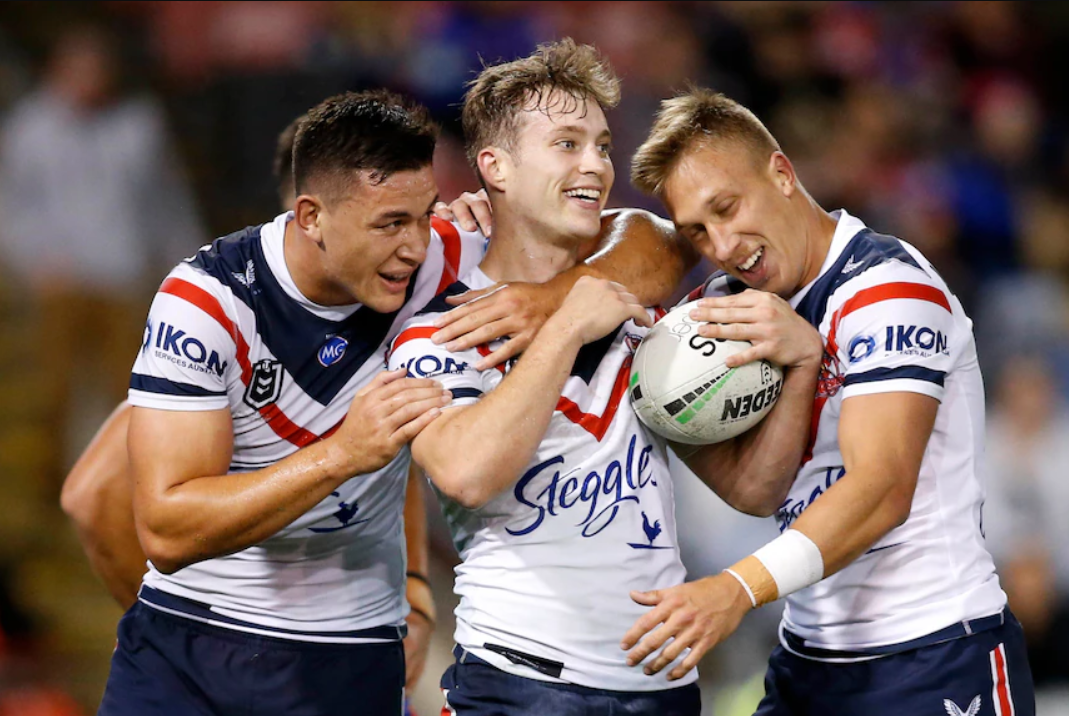 Byes are done, Origin is done, and we have 8 weeks of full rounds to sort out who deserves a chance in the finals. Our Saturday slate kicks off with a newly tweaked schedule with the Cowboys (12th) hosting the Roosters (5th) in Townsville. The Cowboys have lost 4 straight and are close to last-chance status if they want to stay in touch with the top 8. The Roosters have been inconsistent, but they essentially beat bad teams and lose to good teams. Next up is the Raiders (11th) playing the Sharks (8th) in neutral territory on the Gold Coast. Both teams had good wins last week after bad losses the week previous and need this win to keep things moving in the right direction. Finally, the Storm (1st) “host” the Knights (9th) in which it was Melbourne on Thursday but now it has been switched to the Gold Coast. Both having won their last 2 including monster wins in round 16. The Storms only losses of the season were in round 2 & 3 (Panthers and Eels), while the Knights are looking like an improved team with key players back from injury.

The Raiders should welcome back Origin guns Jack Wighton and Josh Papalii, with Matt Frawley and Dunamis Lui (injured) making way. No other changes with youngster Xavier Savage getting another shot at fullback. The Sharks look a settled team with no changes from last week’s win over the Warriors.

The Cowboys won’t regain Valentine Holmes after an origin injury, with Scott Drinkwater to play fullback again and Daejern Asi in the halves. Heilum Luki and Lachlan Burr go out of the team, with Francis Molo returning from Origin duty at prop, and Peter Hola coming onto the bench. The Roosters have ruled out James Tedesco but Angus Crichton to back up from Origin. The resultant reshuffle sees Joey Manu back at fullback and Billy Smith back at centre. Sio Sua Taukeiaho is out with Isaac Liu moving to prop and Fletcher Baker joining the bench.

The Storm are fresh off a bye. There are no changes from their previous game, with the likes of Ryan Papenhuyzen, Harry Grant, Nelson Asofa-Solomona and Tom Eisenhuth all still missing. Cameron Munster, Felise Kaufusi and Dale Finucane all named to back up from Origin. Although Josh Addo-Carr and Christian Welch have been rested. Dean Ieremia and Tui Kamikamicia get the start. The Knights also had the bye last week. They have Kalyn Ponga as the sole Origin representative backing up, and welcome back Tyson Frizell, meaning Mitch Barnett moves to lock and Sauaso Sue goes out of the team. No other changes.

It’s an interesting slate, with increasingly lopsided games as the day goes on, if you believe the bookies. Personally, I like the Raiders chances, and I think the Knights can cause a big upset now that they have all of their players on board. One Origin player to Melbourne’s five can’t hurt either. It’s probably not a spot for a Knights stack by any means, but a Roosters/Raiders stack with 1-2 carefully chosen players from the late game could have some merit.

Walker has shown immense talent and upside this season, with a fantasy ceiling touching 90 already at just 19 years of age. He’s also shown extreme volatility, which has a lot to do with being a skinny kid targeted by opposition big men. Since that massive game, he’s had 5 pretty underwhelming scores followed by a solid 48 last week. In that time, he’s had a few weeks of rest, and should be close to fully fit for one of the easier matchups he’s had of late. The price is nice, so if the Roosters can put the Cowboys to the sword, so I like his chance to hit a ceiling score. Teammate Drew Hutchison is priced the same, and while he may not have as big of a ceiling, he’s got a safer floor if that is what you’re after.

Wilton is getting another run at the second-row position with Wade Graham out injured again. He didn’t take full advantage last week, but in his 6 starting games he’s average over 50 points and just looks like a pretty good player. It should be a tight tussle with the Raiders, giving him ample opportunity to get involved in both attack and defence. I can’t really see this play going wrong at all with the price as low as it is.

It’s been a tale of two halves for Brailey this season. He came out in a blaze of glory in his return from last year’s ACL injury and averaged 65+ in his first 9 games, before going at ~45 in his last 7 outings. His minutes haven’t changed significantly, but his tackle counts have gone from 50+ to around the 40 mark. I can only put that down to fatigue and managing his energy through the season. The Knights are now back to full strength and rested after only 1 game in the last 3 weeks, and have a massive game in the context of their season. I like the chances of Brailey tackling everything that moves and getting back to those 50+ tackle counts we saw earlier this year. If so, I don’t see a better ceiling/price combination at the HOK position.

This recommendation comes down to something of an Origin “hangover”. Papalii played a big game on Wednesday night, and I’d have to think he celebrated hard after the win. He’ll still be ready to put in a big performance for the Raiders in such a crucial game, but I think his chances of paying off this massive price tag are pretty low. The Raiders have a number of big forwards on their bench that can give him a bit of extra rest coming off such a busy week.

It’s not official yet but I do expect Drinkwater to play fullback again as he did last week, and his scoring is just so much worse there. I have him as a 40-45 point guy in the halves, and a 30 point guy at best when playing fullback. Throw in a tough matchup against a disciplined Roosters outfit and I can’t see any reason to even consider Drinkwater in this game.

As I’ve said, I like the Raiders chances, but a lot depends on the performance of their diminished backline. With multiple starters missing with injury, they have Xavier Savage at fullback in his second game, veteran Jarrod Croker at centre who has battled injury and form issues all season (and in 2020!), Seb Kris who has shown big potential but hasn’t scored too well, and Semi Valemei who is decent but needs multiple tries to be relevant. The only solid piece is Jordan Rapana, who is old but has recaptured some of his old form this season. If the Raiders do indeed get the win, they’ll need big games from Jack Wighton and a couple of these cheap backs, but guessing which ones is an impossible task. 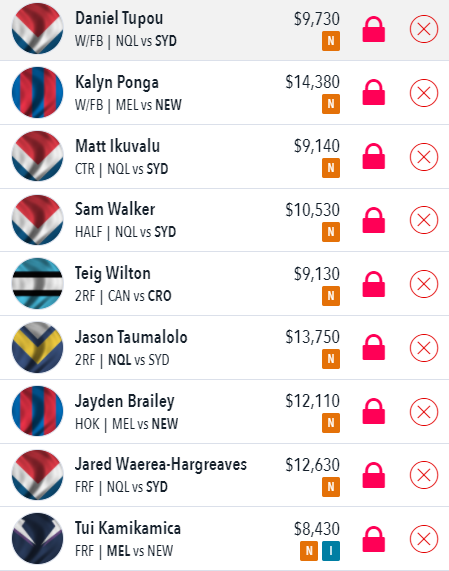