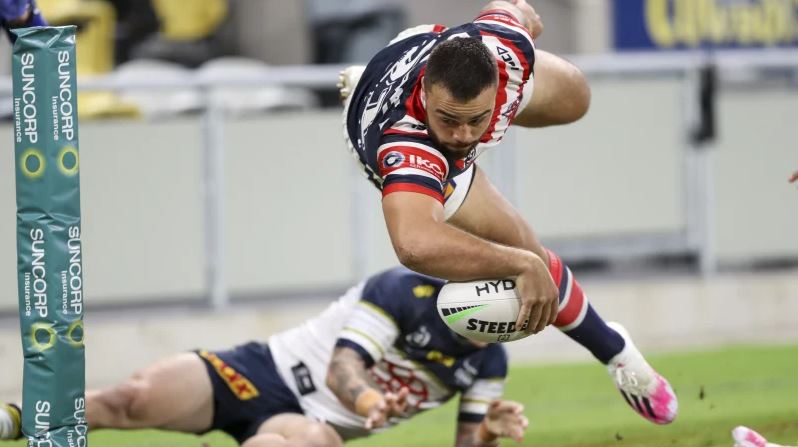 The Queensland Rugby League… Sorry the National Rugby league continues on Friday night with their traditional double header. However unlike last week's double header on the Gold Coast, both the Sunshine Coast and Townsville will be hosting matches this round. The Knights are first up taking on the Roosters in the early match, then shortly after the Cowboys are hosting the Storm.

Siosiua Taukeiaho is out due to a hamstring injury and will be replaced by Fletcher Baker. James Tedesco is back so Joey Manu returns to the centres partnering Billy Smith, with Josh Morris a surprise omission.

Kalyn Ponga is on track to play but prop David Klemmer will miss Friday's clash against the Roosters due to concussion symptoms. Jack Johns comes onto the bench for Klemmer. Sauaso Sue may be a late starter for Connor Watson as he prefers to come off the bench.

Hamiso Tabuai-Fidow is out after undergoing an emergency appendectomy during the week. So it is likely that Scott Drinkwater will switch to fullback and Daejarn Asi comes into the side to play five-eight. Keep an eye on the late mail here. Coen Hess is questionable after a head knock. Murray Taulagi replaces Javid Bowen in the centres with Kane Bradley playing his first game on the wing. Heilum Luki is back from suspension, joining the bench at the expense of Peter Hola.

Josh Addo-Carr and Christian Welch are back after being rested last week and Nelson Asofa-Solomona is also back from suspension. Cameron Munster has been rested, along with Felise Kaufusi and Dale Finucane. Cooper Johns will play at five-eight, Chris Lewis in the second-row and some player named Ryan Papenhuyzen returns on the bench. What a way to ease back in one of your best players via the pine.

When a team constantly puts up 40+ points per game against sides that are “okay” then they are fantasy gold! However the field already knows this and stacking the Storm has always been a fantasy bonanza. It will be very hard to find fantasy value in Cowboys options who have lost 5 in a row and given up 40+ per game. If you are playing the 2nd single game on the night, you can’t ignore all players from the Storm.

However for 2-game slate players, The Roosters look to be in a good spot against an injury plagued Knights team. The Knights were battered early last week with injuries and I am not sure the confidence is still there to stop a Roosters team looking to make a finals tilt.

With the omission of Felise Kaufusi, we get a little gift with a very cheap replacement in Lewis. Lewis is not exactly a killer fantasy scorer but did show with opportunity he can smash value. An 80 minute effort against the Raiders yielded 57 fantasy points. But concerns for the amount of run meters gained means we may need to temper expectations in the low 30’s.

With plenty of flexibility in the CTR position then there is opportunity to stack Roosters/Storm options throughout each backline. Fresh off a double against the Cowboys last week, Ikuvalu remains cheap against his fellow selections in Josh Addo-Carr, Joey Manu and Reimis Smith. Ikuvalu has struggled against quality opposition but the Knights shouldn’t be too much of a problem for the high scoring winger.

Still at that very affordable under $10k price tag, Walker now gets another plumb matchup against a side missing Mitchell Pearce and playing a relatively new player in Phoenix Crossland. Destroyed the Cowboys last week and will continue to kick goals for the Roosters. I am not loving Scott Drinkwater’s potential move to fullback and the pairing of Clifford and Crossland is pretty young. If you cannot get to Jarome Hughes in another killer matchup, coming down to Walker is fine here. Drew Hutchinson also gets a mention at $500 cheaper and in the same set of circumstances.

Radley’s minutes have been boosted and so has his fantasy scoring. A pair of 70 minutes in his last two games has seen his fantasy average rocket to 54 fantasy points per game on average in his last four games. The price is slowly creeping up but I am taking advantage of his dual position and potential to go large here.

His try scoring streak was broken last week but Smith is another big chance to get on the scoreboard against this poor Cowboys front line. With no Harry Grant to eat into his minutes plus Cameron Munster on the sideline, look for Smith to increase his opportunities to run the ball out of dummy half. Throw in his ability to rack up tackle breaks then we have one of the safest plays on the slate. 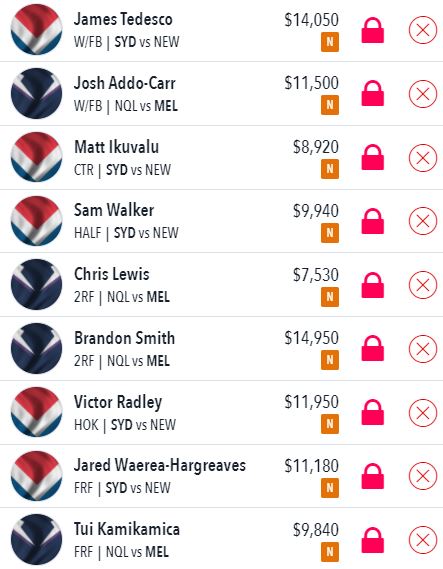