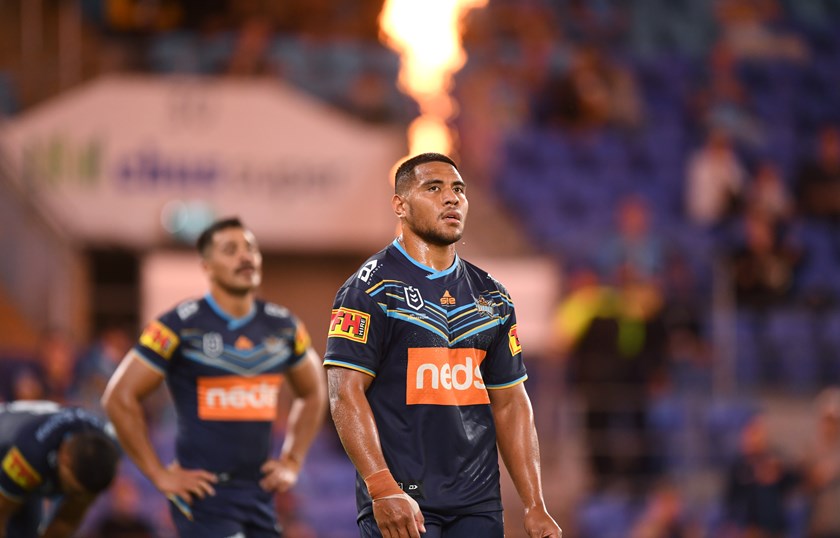 Double-Header Friday returns for Round 2 after a pretty epic opening round of the NRL season. Although the pools have returned to similar levels in 2020, hopefully for players who had a go last week, come back and have another crack this weekend!

On Draftstars a $15,000 contest for the Titans and the Broncos is a pretty big pool along with a $10,000 pool for the Warriors and the Knights to kick off Friday night. We also have a 2-game contest for $5,000 which you can use the “Player Swap” feature on Draftstars. Perfect if a player is no longer playing in the 2nd game!

Gold Coast - High (80%) chance of showers, most likely from the late morning. Could be clear come kick off in the evening.

The Big NSW wet is going to be the theme this weekend so take care when looking at backs options for the early game.

The Knights suffered a couple of on-field injuries last week, Bradman Best has overcome his ailments and will line-up but Kurt Mann was ruled out on Friday. Connor Watson started on the bench but still got plenty of game time with the injury to Mann. Watson is back starting with Sausao Sue back on the bench. The Warriors have lost recruit Euan Aitken for a significant amount of time due to a high ankle sprain so Adam Pompey takes his place at Center.

Brian Kelly has a fractured hand for the Titans with Phillip Sami taking his place at Center. After bending his neck in half, Broncos’ Xavier Coates has been named to play along with bench player John Asiata who has overcome his own neck injury.

WFB: Roger Tuivasa-Scheck $13,280 had a low score in the win against the Titans and while the conditions shouldn’t suit, he could be elite to pay off that $13K. But he is a no for me here. Tex Hoy $9,500 was serviceable at the back for the Knights but only ran 98 meters against the Bulldogs. Again the wet conditions means he needs to get on the end of attacking plays to make value. I would rather take shots on the “better conditions” up on the Gold Coast where I want to be investing in Titans options. 7.5 favourites means Alex Brimson at $11,540 is right in play in front of his home crowd. You can pair with the cheaper Anthony Don ($7,000) or the evergreen Corey Thompson $9,510 who was the only try scorer for the Titans last week. If you were impressed with the Broncos effort last week, then all are pretty cheap with Jamayne Isaako $8,470 the pick as he is the preferred goal kicker for Brisbane.

CTR: After playing his usual role off the bench, this is probably the last time you can roster Tyrone Peachey at $10,670. Made an incredible 35 tackles in 50 minutes. If he keeps that up and adds more tackle breaks (which is more than capable of) then he is one of the plays on the slate. However if you want to go cheaper then Tesi Niu $7,000 at the minimum is a good salary saver. There is a stack of players with W/FB/CTR eligibility here so taking shots on Patrick Herbet $7,610 and Bradman Best ($12,670 bit expensive) will get you very low ownership.

HALF: If you are playing Titans backs options then you need to correlate with the premium halfback for the Titans in Jamal Fogarty. $14,640 is steep but a 60 fantasy point performance in a loss which was just tackle/kick meter based, I really like him here. Mitch Pearce $13,610 at a cheaper salary will be popular but I am worried about the weather conditions. Anthony Milford $10,030 was pretty good when the Broncos were on top last Friday but did stop when the Eels got going. $10K is a good salary but I am wary that Milford could go missing again. Warriors options are cheap with Kodi Nikorima $10,050 the choice as the goal kicker and coming off a 58FP last week. However once again, weather might limit his attacking stats but the tackles/kick meters will continue.

2RF: Having Connor Watson $10,970 starting on the bench last week limited his ownership but now back starting means we can explore that cheap salary once again. One of the locks of the slate, especially if he is starting at Lock, as he played in the halves with the injury to Kurt Mann. Actually prefer him at Hooker but is fine here. I will be looking to invest in premium players here and there is no limit on options. Mitchell Barnett $14,800 kicked 6 goals last week which was a nice bonus to his 63FP effort while fellow edge forward Tyson Frizell $14,110 went even further. Tohu Harris $15,880, Pat Carrigan $15,700 and David Fifita $14,400 are all exceptional options and as I said, I’ll look to roster Watson at HOK and try and jam two of these guys in.

HOK: If Watson is not your cup of tea, Jake Turpin $14,690 and Jayden Brailey $13,810 played 80 minutes last week and once again do not have likely bench cover. So you can load these two up with confidence. Mitch Rein $12,900 and Wayde Egan $9,880 only played 50 mins last week and will struggle to hit ceilings.

The first game should give us an indication how wet the game will be in Gosford so I may stack the 2nd game instead. Hopefully the dramas on Draftstars are ironed out on Friday as we all missed out last night. Good luck! 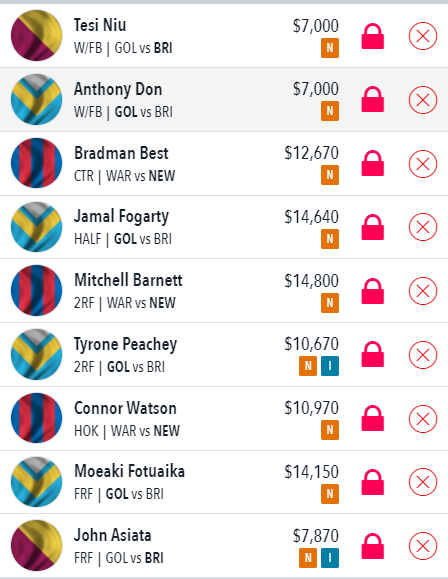