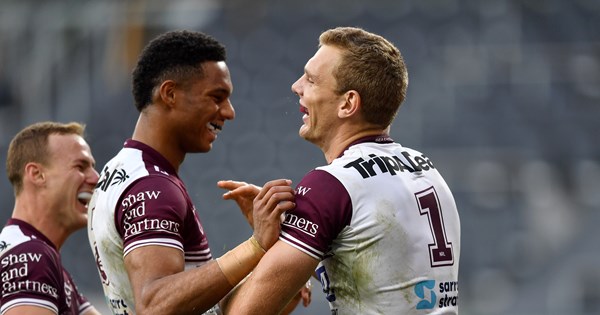 After the craziness of the NRL postponement on Saturday, NRL's Round 20 fixture finishes in a two game slate on Monday night. With a Draftstars Golden Ticket up for grabs in the second match in the evening, let’s focus on this particular match which is the Sharks taking on the Sea Eagles.

On Draftstars, along with the last Golden ticket available to the Live Final, there is a $12,000+ contest also up for grabs along with the mini as well.

Brisbane - Quite a warm day into a warm evening in Brisbane so good night out at Suncorp.

Only a couple of changes for the Sharks with Aiden Tolman returning to the side along with Will Chambers who has been out since June. Shaun Johnson ripped his hamstring and is out for the season. UPDATE: Jesse Raimen has been ruled out on gameday with an ear infection. Siosifa Talakai should moved to the centres and Jack Williams will start in the second row.

Sean Keppie and Josh Aloiai are out for the Sea Eagles but Dylan Walker and Lachlan Croker are on track to play. Curtis Sironen will play in his first match since March.

The Sea Eagles have been a fantasy juggernaut in recent weeks which was highlighted by 9 players posting 40+ fantasy points in Round 19. Not to be outdone, the Sharks also posted 9 players going over the 40+ mark against the Bulldogs, which in hindsight is pretty easy to do. The loss of Shaun Johnson has really plummeted the chances of a Sharks win which will lead me to play Sea Eagles backs in this contest. Getting to both Daly Cherry-Evans and Tom Trbojevic will be a test but both have the ceiling to make your lineups fly!

I originally had Talakai as a valued selection but his move to the centres has killed his value + he is only available as a 2RF. So his replacement Jack Williams is a fine replacement after coming off a 68 minute 48FP performance against the Bulldogs. Flexible in either in the 2RF or FRF spot, Williams is cheap enough to provide enough fantasy value. Just keep an eye out on final teams as the Sharks are currently running a three man front row bench.

The Sea Eagles front row rotation is rather thin with Lawton & Sironen both 2nd row replacements on the bench, so we may see an uptick in minutes for Paseka and his fellow front rower in Marty Taupau. When Paseka hits 50+ minutes then a 180+ metre performance is on the cards.

Tough decision at hooker this evening with Lachlan Croker demanding $600 more salary and Karl Lawton on the bench at $10k. Both Brailey and Croker have 80 minutes in them but I am a bit worried that Croker will be benched with Lawton on the pine to replace. Dylan Walker is also lurking on the bench and could come on and play that hybrid lock/hooker role. So with that uncertainty I am leaning on Brailey who has been solid without being spectacular.

No surprises here. Trbojevic is a fantasy stud and only injury will curtail the highest potential scoring player on the slate. Just a lazy 320+ run meters last round and gets another brilliant matchup against the Sharks. The salary is steep and you will need to make sacrifices elsewhere but I will be starting my teams here. 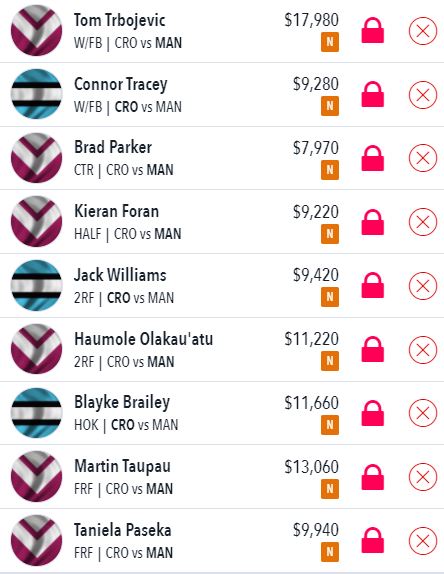