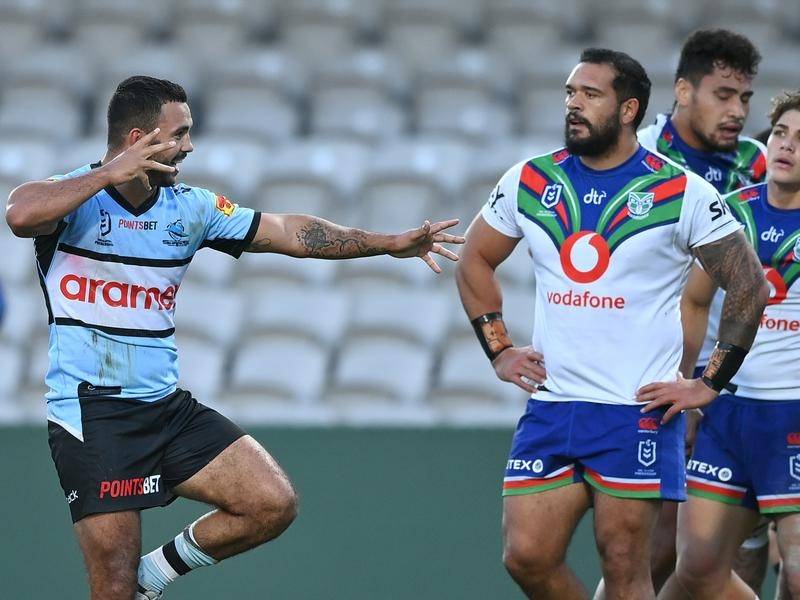 Our Saturday slate for Round 21 is rather juicy, with four of the top six teams playing each other, and some finals implications in the other game. Most importantly, it’s not hard to see a path to victory for each team. The appetiser is the lower quality game between the Warriors (12th) and the Sharks (8th) on the Gold Coast. The Sharks will be desperate to hold onto their top 8 spot, and will feel good having beaten the Warriors a month ago. Next the Roosters (5th) and the Panthers (2nd) face off at Suncorp Stadium, with both teams not at full-strength, but still pushing towards a high finish and strong finals push. We finish with a blockbuster between the Sea Eagles (6th) and the Storm (1st), also at Suncorp. Manly have won 9 of the 11 games that Tom Trbojevic has played this season, and would be easily a top 4 team if he’d not missed 7 games. The Storm are unflappable but can of course be beaten. The Queensland weather should be perfect all day.

Full disclosure, I’ve bet on all three outsiders today, so I don’t think this slate is anywhere near as lopsided as the odds suggest. All that means is that I’m not really favouring any team or looking to stack too much, rather just looking for the most interesting independent plays.

I wish I’d recommended Trindall last week, when his first start without Shaun Johnson meant he took all the field kicking duties, as well as the goal kicking, and subsequently went nuts at 5% ownership (2 tries helped!). With the keys to the team now his to lose, He’s just way too cheap in a role where I think a 45 average is a conservative estimate. The sample is still small, but it seems wise to get ahead of this breakout in a game where the Sharks are heavily favoured.

It’s been an impressive season from the veteran, stepping up in the midst of the Roosters injury crisis to lead the forward pack. The last 5 weeks things have tailed off, with only one score over 40. This is a case where I think that only means he’s closer to his next ceiling score, while his price and ownership have taken enough of a dip to become a solid leverage play. It’s a big game against the Panthers with a top 4 position still within the Roosters reach; JWH should be fired up to give his team the upper hand in the middle of the field.

You don’t see many CTR/FRF eligibilities on Draftstars. It should be 2RF of course, but either way Aitken pulled a shock with his first ever foray into the forwards last week proving massively successful; he pretty much singlehandedly dragged his team to a nail-biting victory. If he remains as busy and dangerous this week (40 tackles, 6 tackle breaks, 2 tries), he’ll be a great pick once again.

It’s easy to bump down expectations on players returning from injury, but even at his best it would be hard for CHT to pay off this price tag. I expect Sean O’Sullivan to continue handling most of the kicking, which means CHT will need multiple big attacking plays to make himself relevant.

A move to the centres isn’t necessarily the end of the world for Capewell’s fantasy prospects, because he relies pretty heavily on big attacking plays for his points anyway. It does take away some of the safety of his tackles, but that’s not the reason I’m off him today. I feel good about the Roosters chances in this game, and especially think they can repel the Panthers attack and limit the upside of players like Capewell. Cleary is out which limits Capewell’s upside here.

After a remarkable breakout in the middle of the season, the shine has gone off Hynes in the last two weeks. Last week was particularly concerning as he saw just 48 minutes with Ryan Papenhuyzen coming off the bench. With Papenhuyzen and Harry Grant on the bench, a lot of Melbourne’s key players come with some uncertainty not knowing how the rotations will pan out. Hynes, Brandon Smith, and even Jahrome Hughes and Cameron Munster can easily get their night cut short if Melbourne do get on top or Craig Bellamy can’t find any other way to get his super subs onto the field. On the flip side, if Hynes does stay on the field for 80 minutes, he’s now a little cheaper and has shown off a massive ceiling with three 80+ scores this season. 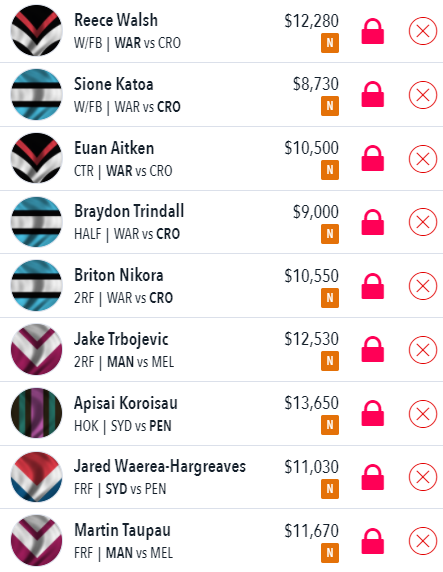