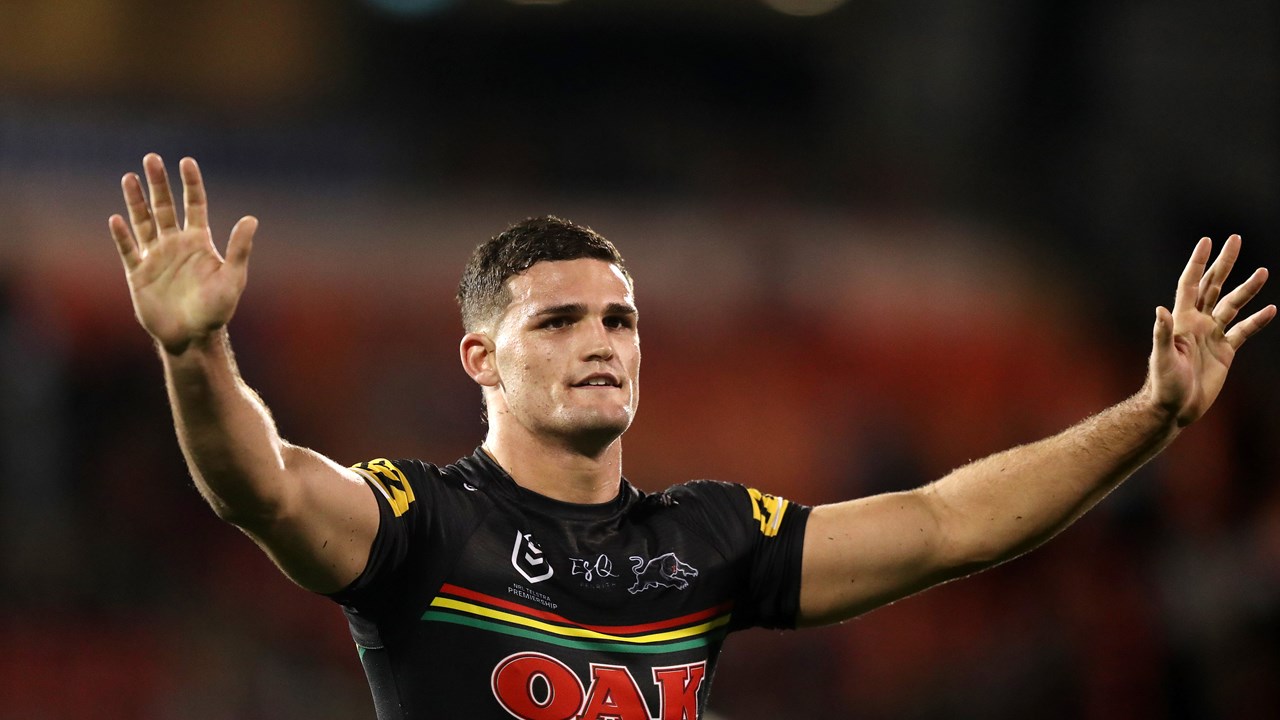 It is the final Double-Header Friday Night of the NRL and thank you to all readers throughout the season who have played Daily Fantasy on Draftstars. Hope you came out a winner anytime during the season. We end the regular season with the Sharks who need to win to assure of 8th place but they need to overcome the Storm who will be looking to wrap up the minor premiership. Shortly afterwards the Eels have put all their stars on ice as they are highly unlikely to get into the top 4. So one would assume an easy passage for the Panthers who could nab the top if the Storm slipped up. Like any sport with resting stars, this creates a challenge on who is going to pop when essentially you can have the guns. Let’s get cracking.

Gold Coast - Possible showers at night. Could be wet conditions for this one.

The Sharks are relatively settled with only Matt Moylan back starting in the halves pushing Luke Metcalf back to the bench.

The Storm should have Nelson Asofa-solomona good to go after being named last week but pulled out. Brandon Smith is back at dummy-half after the return of Dale Finucane. Harry Grant goes back to the bench. But Storm stars Cameron Munster, Christian Welch, Felise Kaufusi, Jesse Bromwich, Josh Addo-Carr, Kenny Bromwich, Reimis Smith and Tom Eisenhuth are all out. Interesting to see who does the ball boy duties for the Storm… George Jennings goes on a wing, Nicho Hynes is in the halves, Aaron Pene gets a start in the second row. Keep an eye out if Jahrome Hughes also gets a tap on the shoulder to rest as Ryley Jacks is named on the bench and Jacks is a flat out half only.

Like the Storm, the Eels have rested a few players including Isaiah Papali’i, Nathan Brown, Clinton Gutherson, Junior Paulo, Mitch Moses and Waqa Blake. So Tom Opacic and Michael Oldfield are the centres, Hayze Perham is the fullback, while Oregon Kaufusi, Makahesi Makatoa, Bruce Carthwright, Keegan Hipgrave and Ray Stone get the start in the forwards. New bench players as well with Samuel Loizou, Ky Rodwell and Sean Russell on the bench.

Whereas the Panthers are pretty much at full strength.

Plenty of value every which way you look so getting to the likes of Nathan Cleary who is a godly $21k this round. The majority of the field will have him, but I’m not so sure he will see out the 80 minutes with Tyrone May on the bench. As for the value, I would rather attack Storm options over Eels as the Storm are still 8.5 favourites and fill out rosters with Panthers attack options.

I think these two will be a safe way to at least 35 fantasy points which is plenty for their salary. I have more confidence in Pene as the Storm are currently running a 2 forward pack bench with Harry Grant down for dummy-half duties in the 2nd half. This might push Brandon Smith back into the pack but there are more than enough minutes to have these two reach value. Loiero has been named to start and is a perfect swap for Pene.

Named at Lock, Stone gets his first opportunity with the start after 6 appearances off the bench. His numbers off the bench are solid and should be up for 55-60 minutes in this match against the Panthers. Not expecting huge things but another 35-45FP score is more than enough here.

Make no mistake, the Eels are going to be doing a hell of a lot of defense against the Panthers and Lussick is in line for a lot of tackles. Expecting a 80 minute shift and I have him pegged for at least 50FP barring injury. Lussick’s last 6 game average is at 50 and represents value with other premium priced options above him.

The price has come down but the opportunity for Hynes to play 80 minutes of footy in the halves is a spot I want to attack. Not a known in-play kicker, Hynes will look to play a Cam Munster 2.0 role by attacking the Sharks line and linking up with Papenhuyzen/Wingers for the Storm. I would roster Hynes in your W/FB spot and leave the cash for Cleary.

I wouldn’t worry about the “efficentness” of Cleary’s salary if does not get to his dizzy heights of 80+ fantasy points. There is doubt that Jahrome Hughes will play and Cleary is coming up against essentially the Wentworthville Magpies. If the Panthers rack up a score then Cleary gets all of the goodness of conversions, assists and might bob up for a try or two. A Cleary failure might still mean he still top scores for the halves on the slate. 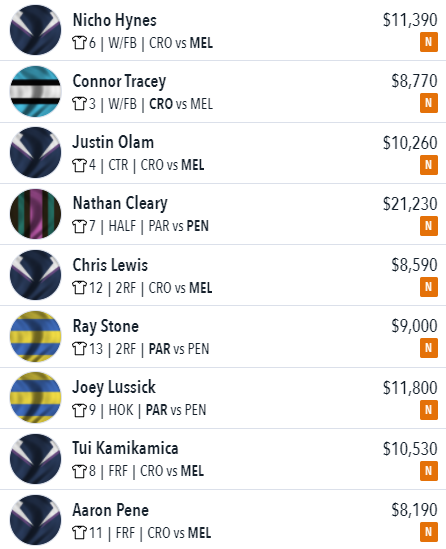