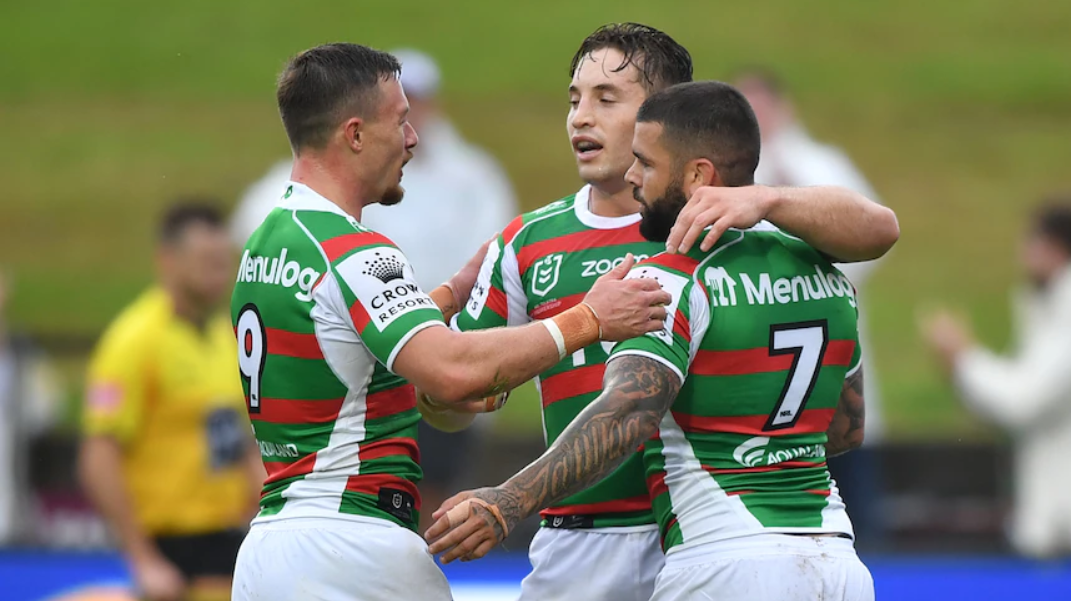 After an epic Grand Final rematch on Thursday night, Friday’s Double Header for the NRL is sure to be an interesting one. The first match is probably not the most inspiring so early into the season with the 1-1 St George Illawarra Dragons hosting the 0-2 Manly Sea Eagles in Wollongong. But it is the late game with Souths (1-1) hosting the Sydney Roosters (2-0) which is the highlight of the night.

On Draftstars, a $15,000 contest for the Rabbitohs and the Roosters is another big pool along with a $10,000 pool for the Dragons and the Sea Eagles to kick off Friday night. We also have a 2-game contest for $5,000 which you can use the “Player Swap” feature on Draftstars. Perfect if a player is no longer playing in the 2nd game!

Wollongong - Morning Shower but should be clear come kick-off

The Dragons should take the same 17 named in the team lists on Friday but the Sea Eagles were forced into a change with Andrew Davey rupturing his ACL. Josh Schuster will play in the back row. Cade Cust who is currently on the bench needs to pass his HIA if he is to take his place in this matchup.

Adam Reynolds took part of the Captain’s run on Thursday and will play after passing his HIA. Jaxson Paulo is out with concussion however so Josh Mansour returns to the wing. A decision on Junior Tatola will be made before kick-off as he has a hamstring complaint. Watch for team lists at 1 hour before kick-off for this one. Victor Radley was to return for the Chooks for the first time since July last year, but suffered a shoulder injury on Thursday. Angus Crichton also returns from his suspension with Nat Butcher back to the bench.

W/FB: Two standout plays in the second match are already sticking out. The premium James Tedesco $16,950 at fullback for the Chooks and Josh Mansour $7,980 as the value play for the Bunnies. Combo’s of these two will be popular and while Mansour struggled in round 1, that sub $8K price tag is just too good to pass up. Tedesco scored two tries in the rout of the Tigers to take his tally to 5 tries, so regression is coming. However 16 tackle breaks through 2 games is fantasy gold. Try scoring machine Brett Morris $12,260 has 6 meat pies through 2 games but at $12K you need at least a double to pay that salary off. Tough to love any of the Sea Eagles options but they are pretty cheap. Dylan Walker $8,520 at under $9K is a good option if you were looking to play the early game but the fullback may be under pressure for his spot. Fresh of a 50FP in Round 2, Mikaele Ravalawa $8,810 is the pick of the Dragons options who has a plum matchup against the Sea Eagles.

CTR: Jack Bird $7,000 played much better for the Dragons in Week 2 scoring 34FP and Draftstars have kept him at the flat minimum. Worth a shot at value if the Dragons get going at home. Both Joseph Manu $9,580 and Josh Morris $9,380 lost $1,000 off their salaries from last week and now back in calculations, if you believe the Roosters will continue to roll on. Somehow these two didn’t provide a try assist last week so there is room to boost their scoring potential. Zac Lomax $11,660 continues to be a very solid fantasy option in the centres. Kicking goals and is pretty dangerous against the weak Sea Eagles defense. Once again, Manly options are tough to love.

HALF: Adam Reynolds $10,830 is likely to play and is likely to be pretty chalky. Just under $11K with 50+FP upside is a recipe for ownership. I wouldn’t go boots and all but that salary is pretty tempting. Fellow Half Cody Walker $11,230 has also had a price drop off a 32FP performance in the wet. You can get great leverage if you can spend that extra $400 to get to Walker. Josh Schuster $9,000 is an interesting option, named on the edge but is HALF available and will get through 35+ tackles. Not sure if he is an 80 minute option, but is an interesting selection. Luke Keary $13,680 is starting to show his massive potential through 2 games and that average of 73FP sees his salary rise to $13K. He is a fantastic play if he can get his numbers up, but likely to regress against the harden Bunnies outfit. I am looking to fade him here. You can guarantee box score watchers won’t select Daly Cherry-Evans $15,620 but I really like him against the Dragons. He may not have the weapons but made an incredible 36 tackles last week.

2RF: The injuries to the back row for the Sea Eagles has opened up value in this position, especially for the aforementioned Josh Schuster and Jack Gosiewski $8,050. Gosiewski missed 6 tackles last week so look to him to be more efficient in his defense. You could sprinkle either of these two if you need to save salary. If you have saved the money then returning Angus Crichton $15,250 looks great after a week off. Fellow edge forward Sitili Topounia $11,400 has had an excellent start of the season, scoring twice along with a pair of 80 minute performances. Does that fantasy production continue? If he fails to score a try then expect a low 40 point score. Dragon options are unappealing and a tad overpriced unless Tariq Sims $8,340 can do something of substance.

HOK: I got my fingers burnt with Freddy Lussick $9,210 last Saturday thinking I have the best value Hooker on the Saturday slate. Played only 28 minutes for 23FP. Although with Victor Radley now scratched, Lussick could get another go at value. Another cheap option in Lachlan Croker $11,060 could be a good option if Cade Cust is ruled out. Then you are left with the premium section with the bounce back from Damien Cook $16,650 the standout. Ben Hunt $15,710 and Andrew McCullough $16,840 are great pivots but expect the field to go to Cook. 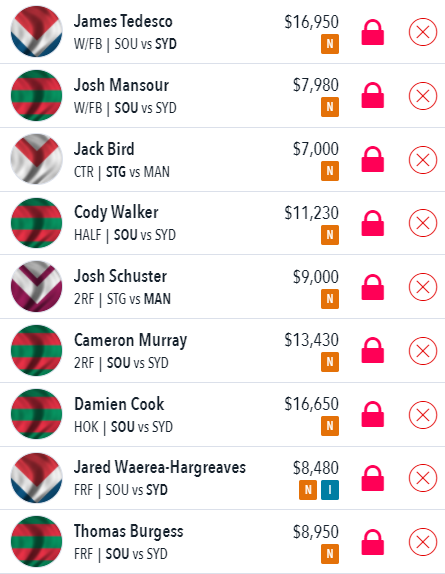