Despite all the injury and rule change shenanigans, the NRL season is really starting to hit its stride. We’re starting to get a very clear picture of who is hot, and who is not. Round 4 kicks off with the red-hot (and premiership favourite) Panthers travelling to Brookvale to try to crush the decimated Manly Sea Eagles. First v Last on the ladder right now. It should be a dry night in Sydney, so Manly will have to play fast to try to keep up with the young Penrith team.

Draftstars has a big $20,000 contest with $2,184 to first place. There are also several other contests including the Mini, Micro, and the High Roller. They’ve gone ahead and priced up most of the Panthers players to make it that much trickier to find a way to stack the massive favourites. Never fear though, there is a few nice value pieces floating around to make things manageable.

Penrith welcome back their leader, Nathan Cleary, to steer the team around the park and kick the ball repeatedly for 80 minutes. His fill-in from last week, Matt Burton, slides out to centre where he will likely kick the ball a lot less, and won’t be seeing the easy 60+ points he’s put up in his few games in the halves. I am sure the Panthers will still let him come infield and roost a few with his prolific left boot. The centre spot is open because Dylan Edwards is unavailable with a broken hand, meaning Stephen Crichton has moved to fullback. It is his first start in his natural position, and it’ll be exciting to see what he can do.

Despite copping three straight thrashings, Manly are unchanged. Part of the reason is that they simply don’t have many fit players to bring into the team. Josh Schuster stays in his second-row slot, which could continue all season after he was one of their best against the Dragons. Dylan Walker also looked a little livelier at fullback last week, and Josh Aloiai was busy off the bench.

As the odds suggest, there is little chance that this is anything other than a demolition job. Manly are just too weak on both edges of the field and any good field position the Panthers get is likely to lead to points. As such I think the prudent play is to find a couple of cheap options you can play from the Manly team and then jam in as many Panthers players as possible.

Let’s get the Manly value out of the way first. I mentioned above that Aloiai was busy off the bench last week, and he’s now strung together three straight scores in the 35-40 region. That’s plenty at this price and it doesn’t hurt that the Sea Eagles are pretty slim in the FRF on this slate, so it’s a great position to save some salary. Jack Gosiewski is another option, but he is a missed tackle machine. Sean Keppie and Morgan Boyle are some minimum priced punts for the truly desperate.

I mentioned that Crichton gets a shot at his preferred position for the next few weeks, and he couldn’t dream of a better opponent to start off against. So far Manly have conceded 6 tries and plenty of fantasy points to the three fullbacks they’ve played (Tedesco, Latrell, Dufty) and he’s actually still pretty good value when you consider that most decent fullbacks average over 40 points per game. Of course, Staines, To’o, Momirovski and Burton will all be lining up to score tries themselves, so it’s no sure thing.

Capewell was both a match-winner and a slate winner when he scored late against Melbourne last week and finished with 68 fantasy points. We saw Manly torn apart by Sitili Tupounia playing right side 2RF in Rd 1 and Capewell is a similarly dangerous player when running onto short balls near the line. Of course, his back row buddy Viliame Kikau is just as damaging, so playing one or both of them is fine by me.

This is a tad harsh but seeing as I’ve gone ahead and completely written off Manly’s chances, I might as well write off their entire backline also. If you do need to play one of them to make the salary work out for your line-up, I suppose I don’t hate the chances of Moses Suli running at Matt Burton playing out of position. I don’t necessarily want to do it, but Suli is the type of player who can do some damage if he’s in the right mood on the day.

We saw a couple of vintage performances from Foran at the Bulldogs last season, but so far this year he looks pretty pedestrian. It doesn’t help that his team has been on the back foot from the start of every game, but I just don’t see how he can be on a winning lineup with 7 players at the HLF position who mostly have more upside than him. (I’m not talking about Croker or Cust, those are bad players also!)

I’m copping out here again by admitting that I’m struggling to split the 3 hooker options. I really don’t want to play either Manly option, because both are playing out of position, and they’re sharing their minutes. They’re also somewhat injury prone. The problem is that Mitch Kenny has practically never recorded a single attacking stat in his 16 games as a starting hooker and he may not be required to rack up his usual 45 tackles in this one. I still prefer Kenny, but I can see why you might consider trying to save some salary at the position with a punt on one of the Manly players. 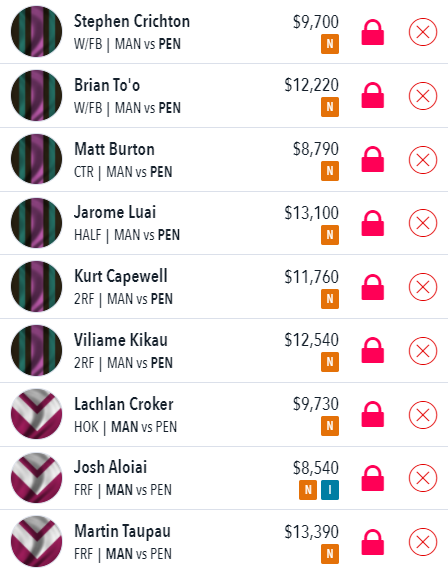