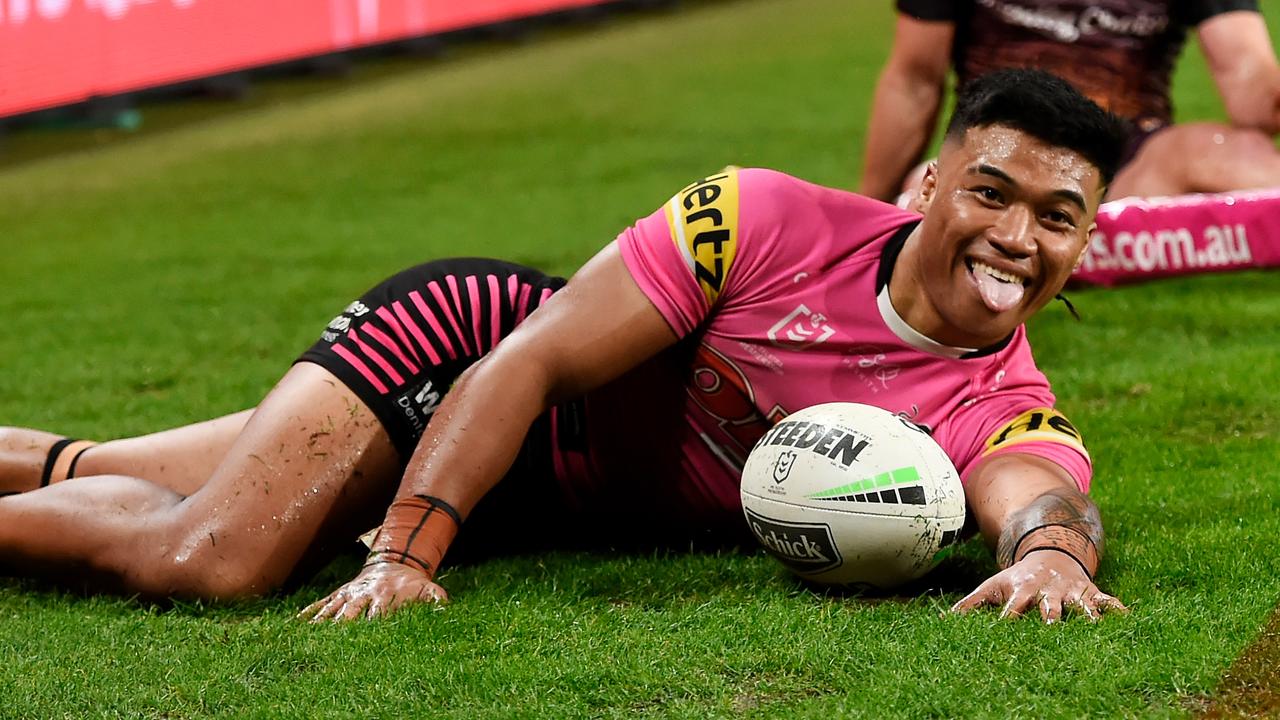 After some rough blowouts in Round 4, we finally get a somewhat “close” double header on Friday with both matches with 7.5 lines. Not to worry, there are always Draftstars contests to win and that is our focus on this Friday slate for Round 5. The Warriors and the Sea Eagles start us off at 6:00pm AEST followed by the Panthers and the Raiders out West at 7.55pm.

On Draftstars, a $15,000 contest for the Panthers and the Raiders is a big pool along with a $10,000 pool for the Warriors and the Sea Eagles to kick off Friday. We also have a 2-game contest for $3,000 which you can use the “Player Swap” feature on Draftstars. There are also High Roller and Micro contests available for the late game.

The Warriors have lost Addin Fonua-Blake, Bunty Afoa and Bayley Sironen for this clash with the Sea Eagles. Tohu Harris and Leeson Ah Mau will shift to the front row and Jack Murchie will start in the second row. Jake Gosiewski will start in the 2nd row for Morgan Boyle who is out with a shoulder injury. Morgan Harper will play in the centres after Moses Suli could not recover from a back injury.

The Panthers will stick with the same 17 from last round while for the Raiders, Joseph Tapine is back at lock pushing Ryan James back to the bench. Ryan Sutton and Josh Papalii have been named in the front row.

W/FB: I am going to lean on the markets here with a higher total in the first match and a line at 7.5, then I am looking at Warriors backs. The highest salaried player is Roger Tuivasa-Sheck who comes in with a hefty $13,450 price tag. After a huge game against the Raiders in Round 3, RTS has only scored an average of 32 fantasy points from the other 3 games this season. However this matchup is too hard to ignore against a Manly side averaging 39 points per game (a league worst). At nearly 5K cheaper, I suspect many entries will have Ken Maumalo at $8,720 who has only scored one try this season. I’ll be looking at Ken to score on multiple occasions here. David Fusitu’a has been tryless through 4 games but at $7,000 who is worth a shot here.

Brian To’o $12,630 is a jet for the Panthers, boosting his fantasy production with over 200+ metre games along with 30 Tackle Breaks for the season. If you do not want to play RTS then seriously consider To’o. Jordan Rapana $9,930 has shown great early season form and like To’o he has a very fantasy friendly game with numerous tackle breaks.

CTR: I thought Matt Burton $9,720 would struggle at Centre last week, but he was excellent with a try, 2 line breaks, a line break assist and 4 tackle breaks against Manly. Is it sustainable? I don’t believe it is so I will let the box score watchers pick him here. This is really not an exciting player pool here but Adam Pompey $9,830 and Marcelo Montoya $8,060 are solid options if you think the Warriors will rack up a score. Tough matchup for Sebastian Kris $7,980 and Jarrod Croker $7,980 but they are cheap to get away with.

HALF: Dare I say it but $17,380 is a little cheap for Nathan Cleary after his 94 point effort against Manly last week. Cleary is simply an elite option who just builds fantasy points from his kicking and his run attack. The Raiders matchup is much tougher than last week but he simply has a 60+ floor if he remains healthy. Despite a rough game against the Roosters, Kodi Nikorima’s $12,180 price has finally caught up on where it needs to be. It's a dream matchup and I believe Kodi could go 55+ here. I think Daly Cherry-Evans $15,880 is just about broken with his banged up Manly side and I expect some fantasy regression to occur. While the Raiders pairing of Jack Wighton $12,530 and George Williams $12,140 look to be good value on paper, they will need to be at their best to produce against the Panthers.

2RF: If you have spent up in the Backs then that is ok because the 10K-12K range should suit you here. Jazz Tevaga $11,100 had an off day against the Roosters, playing only 39 minutes for a 28FP score. If he can get back to 50 minutes and with key forwards out for the Warriors, Tevaga has 50+ potential in him. Kurt Capewell just seems to bob up when you need him and at $10,900 is a solid play. The consistent Elliott Whitehead $10,160 just keeps pumping out 40+ scores and is great for cash games. Ok for GPP’s but if you are struggling for cash then Whitehead is your guy. Got the cash? Then you cannot go wrong with Isaah Yeo $14,670 and Joseph Tapine at $14,050. Should reach 50+ fantasy points with ease. One that I am not keen on this week is Viliame Kikau at $13,530. Those days of $10K Vili are now gone and will be tough to achieve value without a try or something significant.

HOK: If you are planning to play Tevaga on his own then considering sliding him here into the Hooker spot. But Josh Hodgson at $11,440 is playing 80 minutes despite having Tom Starling and Siliva Havili on the bench. Past two matches with 50+FP although these have been boosted by Try Assists. Mitch Kenny $12,740 didn’t need to tackle much last week so expect a bounce back here. Wayde Egan $12,920 is also a surprise after 3 matches in a row playing 80 minutes. Tough selection group this one but I will stick my head out and say Kenny at low ownership.

FRF: Not too many cheap options here, Moses Leota scored a try last week in his 47FP effort but at $8,960 he is playable. Ryan James $8,550 will be super popular despite moving back to the bench. Still will play 40 odd minutes and looks to be one to slot in. Leeson Ah Mau $11,960 will be a great pivot off Ryan Sutton $12,000 who has been going off the past two weeks. Sutton has scored 2 tries in the past two weeks which has seen his average balloon to 77FP in his past two. However with Ah Mau getting the start he is a sneaky chance to pip Sutton who is against the tough Panthers defence. Ben Murdoch-Masila at $7,000 is viable if you need a cheap forward, especially after Fonua-Blake and Afoa are out for the game. 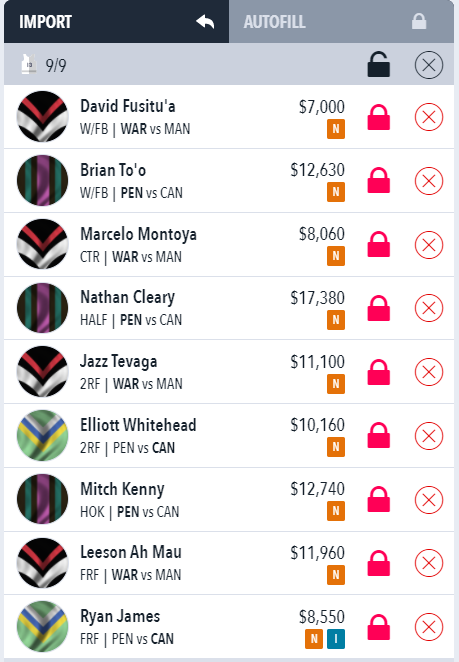