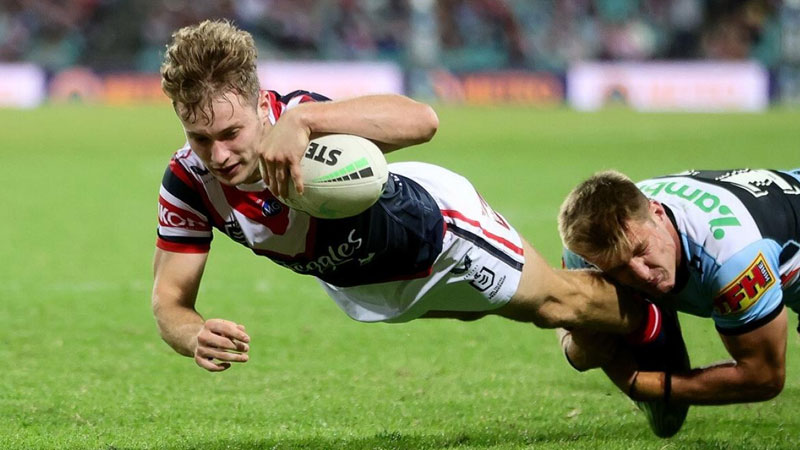 It has been an interesting week for the four teams featured on Friday’s slate. One has had its coach kicked out the door, one hard on their luck for injuries, one with a young star in the making and one team that welcomes back a jet off the bench. The Knights and the Sharks start us off at 6:00pm AEST followed by the Storm and the Roosters in Melbourne at 7.55pm.

On Draftstars, a $15,000 contest for the Storm and the Roosters is a big pool along with a $10,000 pool for the Knights and the Sharks to kick off Friday. We also have a 2-game contest for $3,000 which you can use the “Player Swap” feature on Draftstars. There are also High Roller and Micro contests available for the late game.

Newcastle - Morning shower to clear into a fine day.

The Knights injury crisis seems to be abated with the return of Kurt Mann from concussion, Bradman Best from his elbow injury and Jacob Saifiti from suspension. Connor Watson will shift back to Lock. Brayden Musgrove makes his debut on the wing replacing Starford To’a.

Siosfia Talakai plays his first game of the season and will start on the bench but both Wade Graham and Josh Dugan will miss this one due to Concussion symptoms. Connor Tracey (who is a halves player) comes off the bench to start at wing after Ronaldo Mulitalo was ruled out on Thursday while Briton Nikora is back from suspension and will play on the edge.

The Storm are unchanged but do have Brenko Lee lurking in the reserves after recovering from his hamstring injury. Harry Grant makes it to the bench with Brandon Smith starting at Hooker. Do not be surprised if this is mixed up at 1 hour before kick-off.

For the Roosters, Ben Marschke is the next up in the Hooker spot after Freddy Lussick suffered a fractured arm. Lindsay Collins has overcome an ankle and head knock to start in the front row.

W/FB: We start here with three of the best fantasy fullbacks in the game with Ryan Papenhuyzen $16,060 and James Tedesco $15,740 in the late game and Kalyn Ponga $13,970 up first. Unfortunately there isn’t too much value in the forwards this week so taking one of these comes with risk. I reckon it will be a bit of a grind down in Melbourne so I will be leaning towards Ponga to hit a 50+ ceiling game. The Knights have scored 35% of their tries through the middle so I will be looking towards Ponga to work both sides of the field. Josh Addo-Carr $8,430 is getting quite cheap due to Papenhuyzen’s success, but with a pair of 40+ scores in his last two then he is much more attractive than the Roosters options. Remarkably 60% of tries have been scored on Brett Morris side this season, hence the $12,720 price tag. A tough sell when the Roosters are $3.25 outsiders. Sharks options are quite cheap but no particular player stands out for value. William Kennedy $8,760 has scored three tries in his past two games so I have my doubts for his fantasy production to continue.

CTR: Quite an even set of players to choose from with no exceptional standouts. Bradman Best coming off injury is a worry at $12,420. He does have try/line break ability but will need to go 50+ to pay off that salary. Jesse Raimen $9,650 has looked good on his return to the Sharks side last week posting 50FP. With no Josh Dugan, look for the Sharks to get Raimen more involved in attack. Remarkably Josh Morris $8,830 is without a Try assist this season (but we account that to the lack of tries on the left side) and thus his price has fallen. Could be a safe option if you cannot get to Raimen.

HALF: Trying to find out reasons why I wouldn’t pick Drew Hutchinson who is priced only at $9,260… Two tries in the last two games is a fantasy point booster, but if he gets to 40+ then he smashes value easily. Connor Watson $13,820 returns to Lock and should boost his floor. Being Half eligible means we could bank on the 45FP if he remains healthy. Blake Green $9,140 is a pivot off Hutchinson in the early game and should get through a lot of in-play kicking metres, not a bad punt if the field goes towards Hutchinson. Only two tackle breaks for Cam Munster $14,470 last week in their big win, well worth the selection if you have avoided the high salary backs.

2RF: On the back of x2 50+FP performances and 80 minutes in each game, Teig Wilton $11,120 has been forced out to the Centre position and now becomes overpriced. Jack Williams $7,930 comes off the bench to start in the 2nd row and instantly becomes a value play. However I am wary of Siosifa Talakai on the bench who could eat into Williams/Rudolf/Nikora minutes. Victor Radley $10,530 got through another 60 minutes on his return from injury. Tough test against this Storm pack but is cheap enough to get up to 40FP. Got the cash? Then Angus Crichton at $15,120 should lead the scoring in this position after back to back 60FP’s. Unless there are some line-up changes before kick off, there is a lack of value here outside of Williams.

HOK: Ben Marschke $10,100 played in Lussick’s absence last round and scored 43FP from 60 minutes. He is the cheapest player in this position but I am weary of his fantasy output at that price. Jayden Brailey is now in eye watering premium territory at $16,090 but was $16.9k last round. His 60+FP production should continue with no cover in sight. I guess the question that needs to be answered is Harry Grant $13,740 going to get the start for the Storm, or does he come off the bench? The Storm could play Grant at the nine and push Brandon Smith $10,670 to the bench where he can come on as a front rower replacement. Either way I will be avoiding Smith due to the lack of minutes he now faces.

FRF: I was wondering and you may be wondering ‘where is the value?’ Don’t worry, the value is up front. Isaac Liu, Jesse Bromwich, Jared Waerea-Hargreaves, Jacob Saifiti are all under $10,000 and all should go very well here. They just eek out a 35-40FP performance but we need to take it here. Tui Kamikamica $10,820 gets another mention after a season high 54FP performance against the Bulldogs. Playing 50+ minutes and just taking his opportunities through 5 games, I like him here. If you have the cash then Siosiua Taukeiaho $13.080 is a great option at just over $13K. Still the Roosters goal-kicker and playing big minutes. 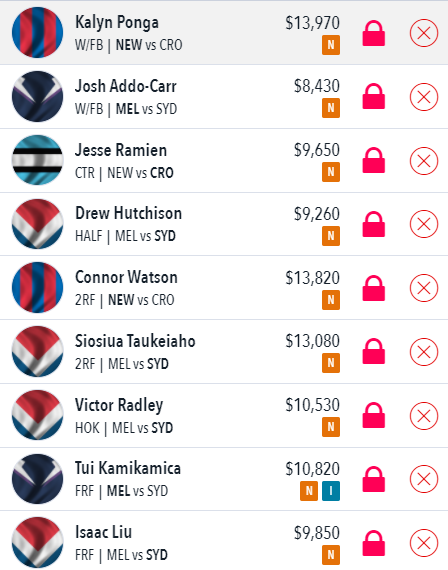