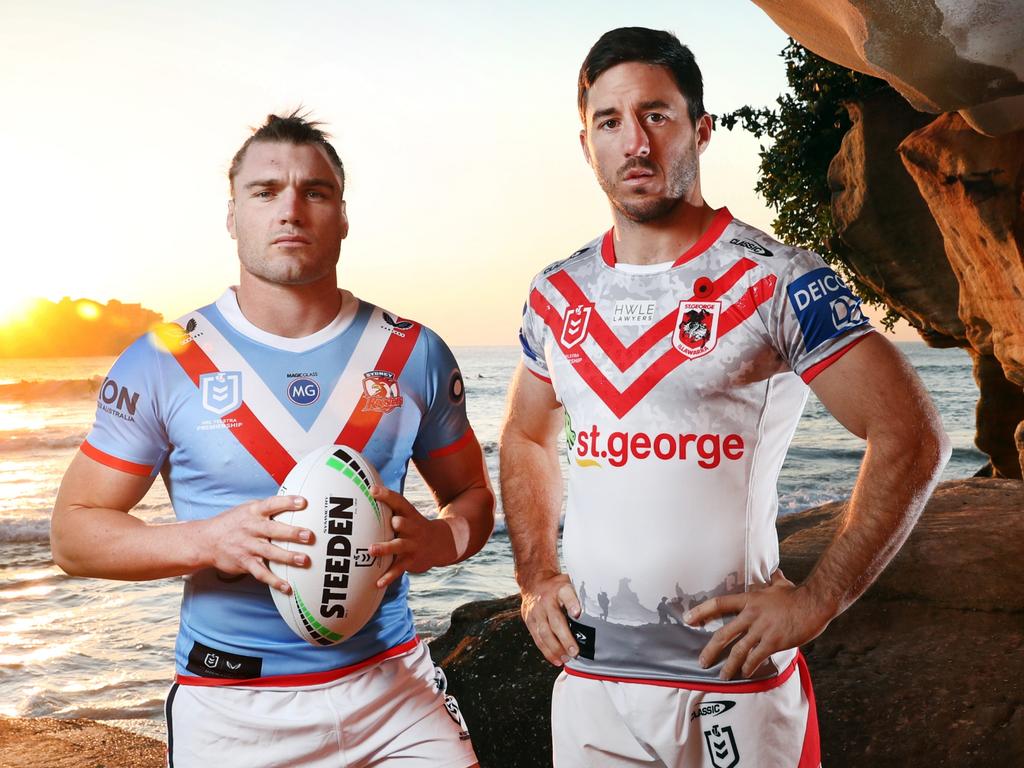 In a tribute to the Australian Defence Forces on this Anzac Day, the NRL has scheduled three matches back to back on Sunday. The Tigers and the Sea Eagles get the slate underway at 1:45pm AEST with the traditional clashes between the Roosters and Dragons and the Storm and the Warriors to round out the big day. Let’s see who can target on in Draftstars contests throughout the day.

Melbourne - Medium chance of a shower but a small amount only.

With Asu Kepaoa out for the season, Michael Chee-Kam plays his first match of the year in the centres for the Tigers.

No changes at Manly after smashing the Titans in Mudgee last round.

Victor Radley beat his suspension and will play for the Roosters who also get back Brett Morris after a tight calf saw him miss last round. Sam Verrills also returns to the Chooks at Hooker but we await the fitness of Jared Waerea-Hargreaves and Siosiua Taukeiaho after failing to finish last week's match. Taukeiaho is out due to his rib injury.

Dragons won’t see Ben Hunt after a fractured fibula three matches ago, as he was ruled out on Saturday. Blake Lawrie returns for the Dragons.

The Storm will welcome back captain Dale Finucane but via the bench. Ryan Papenhuyzen has a crook shoulder so he will miss this match and possibly more. Nicho Hynes will replace Papenhuyzen.

Warriors are getting pretty short in the backs with Peta Hiku, David Fusitu’a and Adam Pompey injured. Usually a 2nd row forward, Jack Murchie has been named in the centres. But the big news after initial team lists is that Tohu Harris has been ruled out due to concussion. Jazz Tevaga gets the start and Rocco Berry will play on the wing.

W/FB: First player of instant value on the slate is the replacement fullback for the Storm in Nicho Hynes. In three matches that Hines started at Fullback he has rattled off fantasy scores of 51, 33 and 52. Look he is no Papenhuyzen but his price tag is more than affordable for this slate. Fellow Storm backs are also in play without the focus of Papenhuyzen, so we can certainly stack Melbourne with Josh Addo-Carr and George Jennings the targets.

Tom Trbojevic came back with a bang last week and Draftstars didn’t miss him pushing his salary by $3k in the process. Has another opportunity against a hapless Tigers team so doubling down is a sound strategy.

Daniel Tupou is pretty cheap now at $8,200 but only 1 try on the season means upside is coming. Not real keen on Tigers/Dragons/Warriors options here.

CTR: Pretty cheap options throughout the three matches but none really stand out like a sore thumb on a cold day. Zac Lomax continues to be a consistent fantasy scorer and tops the list of options at $10K. He is fine but has a tough matchup against the Roosters. I actually prefer his teammate in Jack Bird who is building into the season quite nicely with 16 tackle breaks in his past two matches.

Storm’s Justin Olam fills out your Storm stacks quite nicely while Roosters options of Joey Manu and Josh Morris are fine to plug in. As I said no real standouts here but look to link your W/FB selections with a CTR from the same side.

HALF: Cheap Roosters options in a favoured side are going to be pretty popular. Drew Hutchinson and Sam Walker are still under 10K but did show that fantasy production is not consistent (Walker only scored 24FP last week). Big stage and big hype once again will provide interesting viewing on Sunday afternoon.

Daly Cherry-Evans wasn’t really required last week as Trbojevic ran the Titans ragged from their own half. But look to him to take over the Sea Eagles attack and bust out that 60FP score. Josh Schuster who is still playing in the 2nd row is still Half eligible, so you could roster him here if you are looking for a consistent score. Can’t go wrong with the Storm’s Cameron Munster and Jahrome Hughes while the prices for the Warrior’s Kodi Nikorima and Sean O’Sullivan are starting to get a bit rich for me.

2RF: The Roosters were banged up against the Storm and their fantasy reflected that. But fast forward a week and the likes of Sitili Tupouniua, Isaac Liu and Angus Crichton are now very affordable. Tupouniua at under $10K is nearly my first picked for the slate. There is also value in Victor Radley but I am a bit hesitant on his role and minutes for the chooks. You could also look at a double Hooker stack with Brandon Smith available as a 2RF. But it is Rooster's options for me here.

HOK: Sam Verrills first match since his ACL injury in 2020 will be of interest, but with Marschke still on the bench then I expect the Roosters to limit his minutes first up. Jake Simpkin played the full 85 minutes for the Tigers in his first match of the season and a solid option at 11K. If Harry Grant gets the start for the Storm then load him up, but tough if you are playing the full slate. Maybe keep him for the single contest on Sunday night. Andrew McCullough and Wayde Egan are great but overpriced for my liking.

FRF: I usually don’t recommend playing too many bench options for the front row but coaches are using impactful players off the bench. Think of the likes of Josh Aloiai, Daniel Alvaro and Lindsay Collins who have cheap salaries and can match their starting teammates. However there is some value in Jesse Bromwich, Kane Evans, Jaymayne Taunoa-Brown and Josh Kerr who all get the start. 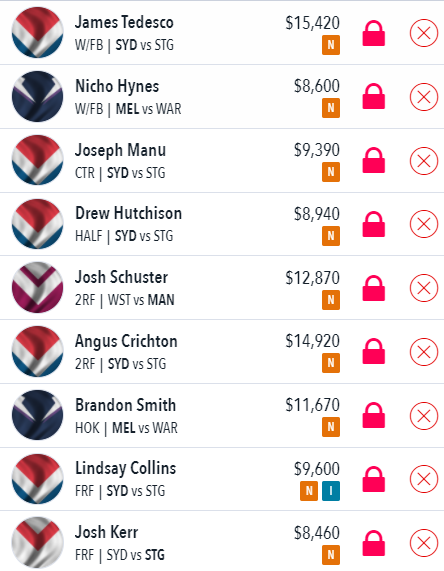