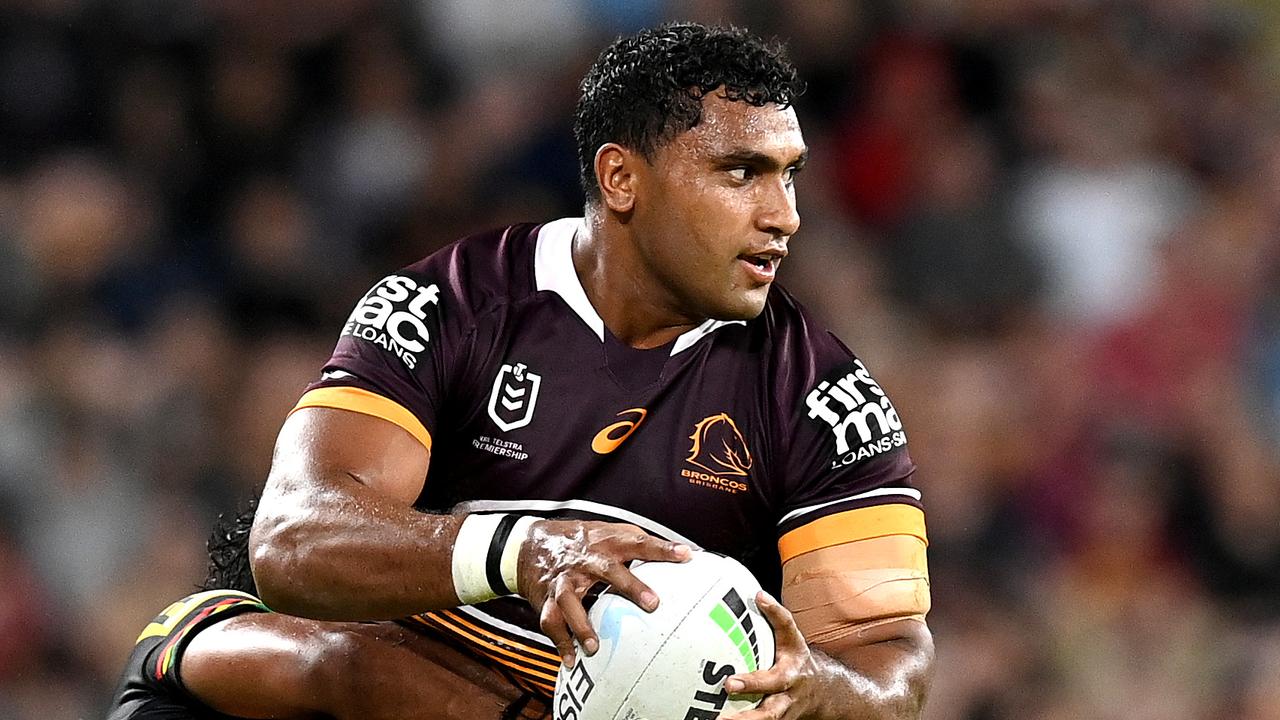 We are up to Round 8 of the NRL and another Friday night Double Header is on the schedule. The Storm (5-2) are up first hosting the Cronulla Sharks (2-5) who are looking to show something against the powerhouse side. The late game is the “Big Brother v Little Brother” matchup between the Brisbane Broncos (1-6) and Gold Coast Titans (3-4) at Suncorp stadium

On Draftstars, a $12,000 contest for the Broncos and the Titans is the highlight on Friday night, along with a $10,000 pool for the Storm and the Sharks to kick off Friday. We also have a 2-game contest for $3,000 which you can use the “Player Swap” feature on Draftstars. There are also High Roller and Micro contests available for the late game.

Brisbane - High (70%) chance of showers. The chance of a thunderstorm.

There are some changes to the Storm with George Jennings and Nelson Asofa-Solomona both ruled out due to head knocks. Reimis Smith will go to the wing and Tom Eisenhiuth to Smith’s centre role. Tui Kamikamica gets the official start after being named to start at kick off in the past couple of games. Harry Grant is still on the bench but is likely to play a more significant role for this match. UPDATE - Multiple changes for the Storm, refer to the teams tweet below

For the Sharks, it will be a ‘revenge’ style match for Will Chambers against his old side who gets the start over Josh Dugan. News on Thursday saw Jesse Ramien injured in training which will see Teig Wilton fill in at Centre. Siosifa Talakai didn’t last long in his comeback after being suspended for his brutal shoulder charge. Wade Graham returns after a couple weeks off due to concussion and Aidan Tolman gets the start in the front-row.

Ah yes… The Brisbane merry-go-around continues in the halves with Anthony Milford back at five-eight and Tyson Gamble getting the start at half-back. David Mead, Tom Dearden and Brodie Croft are out. Jesse Arthars also gets a start at centre. Alex Glenn is out with a calf so Jordan Riki returns to the 2nd row.

The Titans have lost Patrick Herbet and Sam Lisone to injury but Herman Ese’ese plays his first game for the Titans from the bench.

With the Storm big favourites at home then it is logical to target Storm backs, especially with Ryan Papenhuyzen still out of the side. There is some clear value there. As for the second match, the lack of scoring power from the Broncos backs should see some Titans stacks as well. The battle of the big boppers in David Fifita and Payne Haas should be fun to watch but may be just a stretch to roster, lets see how we go.

W/FB: With no George Jennings and no Ryan Papenhuyzen for the Storm then attention turns to Josh Addo-Carr. The Fox ran in two tries last week against the Warriors for a season high 60FP. The price has gone up but along with Corey Thompson, Addo-Carr has one of the highest ceilings on the slate. A popular pairing will be with Nicho Hynes who smashed value last week and you could debate that he is the best value in this position. If you were looking to jump on the Titans then the extra cash for Corey Thompson is a great play considering the form he is in. 2 Line Breaks and 11 Tackle Breaks without scoring a try is some fantasy game. If Fifita doesn’t score them then a couple extra passes to Thompson brings him into calculations. A lot of cheap options in Sharks and Broncos backs, none really excite me in an underdog win but if 10 out of 15 tries have gone down the Broncos right side then shots at Xavier Coates could pay off.

CTR: I rather take Justin Olam over Tom Eisenhuth for the Storm in a right side attack if you are stacking the Storm. Olam bounced back from a poor game against the Roosters with a try in his 36FP effort against the Warriors. With Teig Wilton now at centre I am leaning on Will Chambers considering he is pretty cheap in his debut and is an acceptable plug-in if you need the cash. One play that is intriguing is the naming of new Broncos halfback Tyson Gamble in this position. Gamble played 2 games last year for Brisbane but only lasted 1 minute in Round 19 2020 with a head knock. Gamble was impressive for the North Devils in their win in the Intrust Super Cup and could be a sneaky play. Tyrone Peachey and Brian Kelly are always in play for the Titans and are safe plays here.

HALF: Always been a fan of Jahrome Hughes who is regularly underowned than his counterpart in Cameron Munster. But the sharps of the DFS community have caught onto this and do not be surprised that ownership works towards 50/50 with Munster. Two 75+FP scores in the past two rounds and now gets another plum matchup, sign me up to finish off that Storm stack. As Tom mentioned in his Saturday preview last round, Chad Townsend will be overshadowed with the return of Shaun Johnson. Both Johnson and Townsend are overpriced for this slate and we need to wait for their prices to come down. If you are looking to play in the late game then Jamal Fogarty should be on your radar. Scored 57FP against the Rabbitohs and while halves partner Ashley Taylor showed glimpses of life he is the one you want to target against the Broncos. Anthony Milford is tempting after 3x 50+FP performances before being dropped but I rather have Titans/Storm players.

2RF: It was a bit bizarre that Tui Kamikamica only played 30 minutes last round. Got picked to start and never came back on after his first rotation. Begs the question is he better off the bench? Certainly back him again at that 10K price tag. Jordan Riki at 10K offers a safe 35-40FP floor score if you need to pay down here. But you want to be targeting Tevita Pangai Jnr who will be fired up to play against David Fifita who is at the premium 17K price tag. TPJ rattled in a 71FP effort against the Eels despite the thrashing. I am not sure Fifita will score 80FP in a half ever again but he is certainly a slate breaker. You will need to make some sacrifices but there is value here to get him in. Sharks options once again look overpriced.

HOK: 3 out of the 4 sides have bench cover so this makes selection quite tricky. Blayke Brailey looks the standout here being the only 80 minute player coming off back to back 58+FP performances but the ceiling capabilities of Harry Grant and Brandan Smith cannot be ignored. If Grant can get more minutes and leave Smith in the forward rotation then you have pivots off Brailey. Mitch Rein and Jake Turpin with 40-50 minute roles are tough to love here.

FRF: Moeaki Fotuaika got the start for the Titans last week and came back strong with a 160m+ 36 tackle effort that saw him score 58FP. If he gets 50+ minutes in this one then he is a strong premium play. Payne Haas is always in play for the Broncos but $17K may be a bridge too far here. If you are looking for a couple of cheapies, then Jesse Bromwich at under $8K is very hard to resist. He may only get you 25-30FP but you just never know with the Storm. Kamikamica and TPJ are FRF available and could be suitable here. 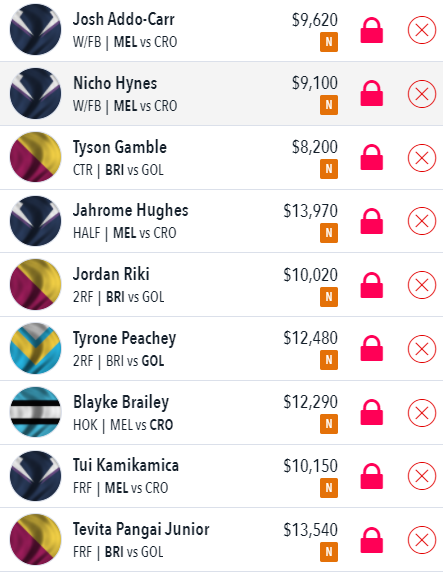