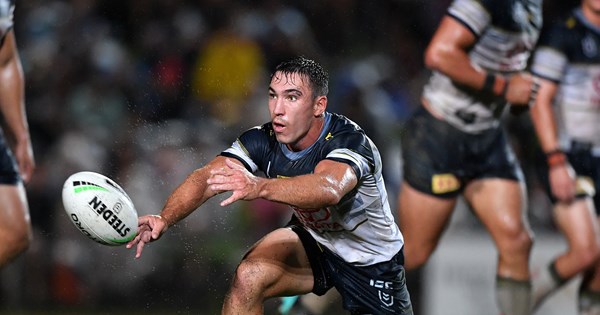 We’ve had three great days of footy for season 2022, but the first round still has a couple of intriguing games ins tore for us. The Sunday action kicks off with the Parramatta Eels hosting the Gold Coast Titans at their fortress, CommBank Stadium. The North Queensland Cowboys then welcome the new-look Canterbury Bulldogs to Queensland Country Bank Stadium in Townsville. In the context of last season, the first game features two finals teams while the second game is between the bottom two teams. But a new season brings fresh hope, and I’m expecting a couple of quality games of rugby league. The one spanner in the works is that both venues could see some rain on game day, although it’s likely to pass before kick-off.

Draftstars has a $15,000 Sunday contest with $1132 to first place. The single game contests are for $12,000 and $20,000.  There are also several other contests including the Mini, Micro, and the High Roller. Don’t forget that there has been a big change to player positions and lineups this year, with only 3 positions and 7 players in each lineup, including a FLEX spot (formerly 6 positions and 9 per lineup). You can read more about that in our article summarising the changes here.

The Eels look pretty familiar, with the exception of the wings where Bailey Simonsson has arrived from the Raiders and Sean Russell will start for the injured Maika Sivo and departed Blake Ferguson. Will Penisini gets the right centre spot. Shaun Lane reclaims a starting edge spot, with Ryan Matterson shifting to lock to cover the injured Nathan Brown. Coach’s son Jake Arthur is named on the bench as a utility, likely to play less than 10 minutes to spell Reed Mahoney or cover an injured back.

The Titans have a new-look halves combo, with Jamal Fogarty and Ash Taylor heading to new teams. Toby Sexton is the halfback after impressing in 4 starts last year, and AJ Brimson moves to five-eight. Erin Clark is the starting hooker with Mitch Rein gone, and new recruit Isaac Liu will start in the front-row in place of Jarrod Wallace. Beau Fermor starts at second-row, with the ageing Kevin Proctor demoted to the bench again as he was at the end of last season. New recruit Will Smith is the bench utility, likely to share the hooking role with Clark.

The Cowboys have two veteran arrivals from the Warriors, with Peta Hiku sliding into the centres and Chad Townsend taking over at halfback. A third former warrior, Jamayne Taunoa-Brown, will start in the front row. Youngsters Heilum Luki and Jeremiah Nanai get the first crack at the second-row spots, meaning Coen Hess continues to play as a prop. Hamiso Tabu-Fidow is the starting fullback, effectively switching positions with Valentine Holmes who will now play right centre. The bench is made up of 4 forwards, but Reuben Cotter likely covers Reece Robson at hooker, while Tom Gilbert should play limited minutes to give Luki a mid-game rest.

Where to start with the Bulldogs. Their arrivals list is massive, and they’re all playing. Matt Dufty is the fullback, Josh Addo-Carr on the wing, Braydon Burns and Brent Naden both won centre spots over Aaron Schoupp, and Matt Burton will play in the halves with Jake Averillo. Paul Vaughan is at prop, Tevita Pangai Jr in the second row, and Max King on the bench after a year developing with the Storm. Of the existing players, Jack Hetherington has made a move from prop to second row, which should be interesting to monitor. Kyle Flanagan, Ava Seumanufagai and Raymond Faitala-Mariner are among the players forced out of the team by the new arrivals.

The Eels are big favourites, which is fair after the Titans struggled against good teams in 2021. I hold hope that they’ll tidy up their defence this season, but I think it could take a while. Meanwhile the only real question mark for the Eels are their two new wingers, who I’m sure will do just fine when getting good ball from their teammates. The second game looks a lot closer, and I actually think the Bulldogs should be handy favourites. Yes, they need to prove it on the field before we can believe that all their signings will turn their fortunes around….but it’s a very different looking team and I’m buying in early. The Cowboys look okay on paper, but they’re relying on a handful of players 22 and under in their starting team, and I don’t think it’s going to go too well.

Note: Since publication, Pangai Jr has been ruled out with injury.

The Bulldogs recruitment drive landed them plenty of new talent, and these two might be the most important to the team’s chances of success. Both also happen to come at a discount thanks to playing out of position at their previous team. Pangai Jr played at both the Broncos and the Panthers last year, and especially at the Panthers was used as a middle forward, often in limited minutes off the bench. Back in his preferred spot on the edge, he should get close to 80 minutes and have the chance to exploit a questionable Cowboys defensive line. Burton of course was at centre for most of the 2021 season, but averages around 60 in his games in the halves. While that could drop a little moving from the best team in the comp to the reigning wooden spooners, he clearly has the talent to rise above. He also looks to have secured the goal kicking duties. These could be the two strongest fantasy players in this game, so the price is impossible to ignore.

In Gutherson’s case, the price is again very generous, but this time I have no idea why. After a good 2021 season, he’ll again be the fullback and team leader in a strong Eels team. That should equate to an average in the 45-50 region, making him an obvious value play as well as the likely tops corer at WFB on this slate. The Titans’ defence was prone to going missing for long periods last season, and while I expect some improvement this season I still think the Eels will rack up plenty of points in this one.

The Cowboys struggled last year, and despite several changes look set to do so again in 2022. Luki (20) and Jeremiah Nanai (19) have been chosen as the youngest starting second rowers in the NRL this week, and both showed glimpses of substantial talent in their opportunities last season. Nanai is more likely to get close to 80 minutes, but Luki looks like a Vliliame Kikau clone who can do a lot of damage in around 60 minutes on the field. While that Bulldogs should be much improved this season, the Cowboys are still favoured and Luki should see some attacking opportunities against a lot of new defensive combinations. Anything like Kikaus ~45 points per game will be sufficient, but the ceiling is much higher.

The arrival of Chad Townsend will change the halves dynamic at the Cowboys. Scott Drinkwater was the one to lose his spot, but Dearden will likely feel the effects as well. Townsend should take over as the controlling half and subtract a few points off Deardens scoring potential. The price is high enough that I’d have been reluctant even in last year’s circumstances, but now it looks like a clear situation to avoid.

In a different way, Jackson may also be impacted by new arrivals at his club. While the likes of Burton, Pangai Jr, Naden, Burns, Addo-Carr, Dufty, Vaughan and King shouldn’t detract from his role directly, I do see a slight drop in his scoring. Firstly because the forward pack is looking significantly stronger now, which at times will probably mean a few less minutes and a diluted share of the workload. Secondly, the team should be much better this season, which will mean more points scored and more time in attack. Given that Jackson scores most of his points by averaging 46 tackles per game, he stands to lose some of his workload in this way too. Finally, now on the wrong side of 30 and having copped a battering over the years, a natural decline is also in order. Maybe that all only amounts to 5 points per game, but that is enough at this big price and as a player with a limited ceiling.

The changes at the Titans are a little more subtle than other teams, with some players leaving and everyone else settling into new roles. Jamal Fogarty and Ash Taylor are two of those players, meaning an all new starting halves combo of Brimson and Toby Sexton. Brimson played some five-eight when starting out in 2018-19, with an average in the mid 30s. His years as a fullback showed his obvious quality as a footballer, but were also marred by injury. In a fairly young team loaded with potential, it’s hard to say whether Brimson is about to ride the wave as the team surges into premiership contention or struggle to adjust to the role change as the team again fails to put all the pieces of the puzzle together. With a middling price and against a tough opposition against the Eels, it’s probably best to wait a week and assess, but it’s far from a clear situation. 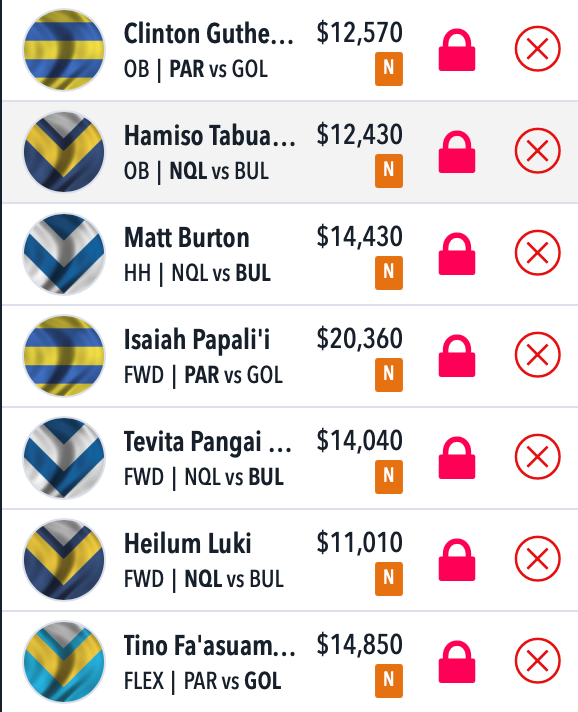 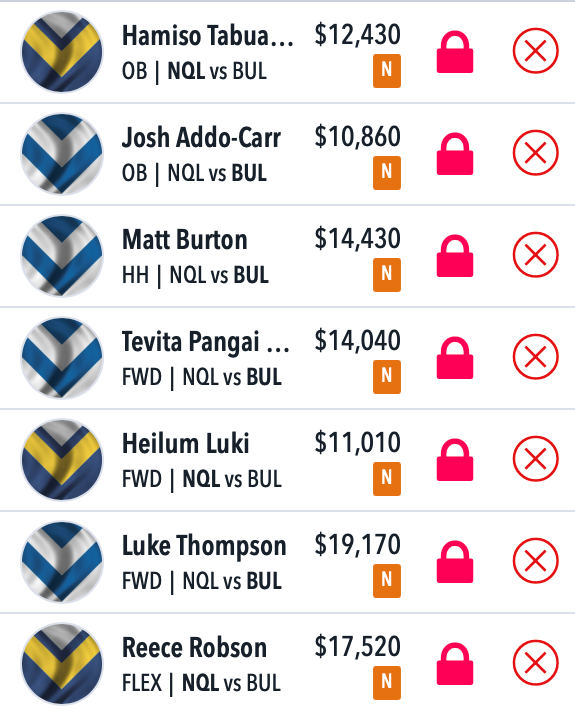 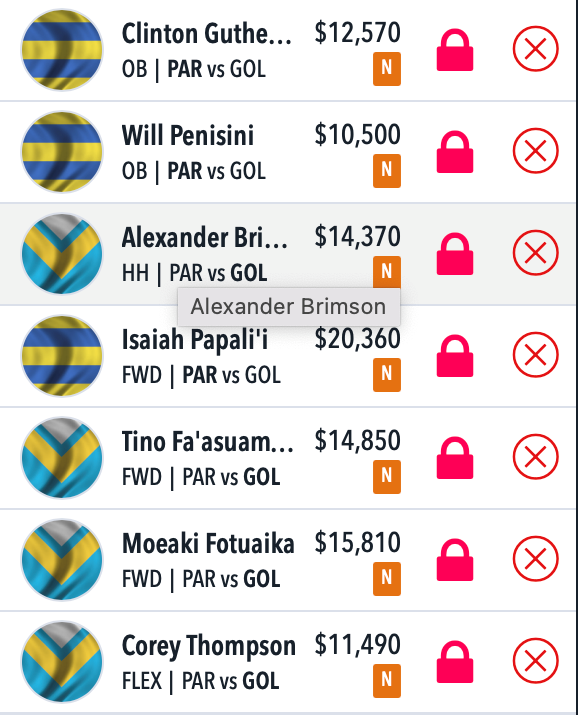